We hope you had a lovely Fourth of July holiday and are ready to get your feet wet with the latest news in global health security! Global health advocates are pointing to the impending reality of blurring between national security interests and global health agendas. Researchers in Belgium have discovered E. coli samples from cows and pigs that contain a novel gene, MCR-2, that is colistin-resistant. Colistin-resistant bacteria are particularly concerning as colistin is the antibiotic of last resort. This week has been busy with three major reports on lessons learned from the 2014 Ebola outbreak.

Panel Urges Reform After HHS Ebola Response Failures
The plain and simple truth of the 2014/2015 West Africa Ebola outbreak is that the U.S. was not prepared to handle it – we struggled internationally and seriously failed domestically. In the wake of this sobering reality, an independent review of the Department of Health and Human Services (HHS) efforts found serious flaws within their response to the outbreak. You can read the report here, which stresses that the lessons from HHS’s response to Ebola can be applied to future outbreaks, including Zika virus. There were thirteen findings from the panel ranging from “lack of strong leadership and response coordination from WHO hindering HHS and international response efforts” to “HHS did not apply existing pandemic plans and coordination mechanisms during the Ebola response” and “HHS is not configured or funded to respond to a prolonged public health or medical emergency overseas or at home”. Key recommendations focussed on coordination with the National Security Council and federal partners to finalize a government framework for multi-agency response, clarification on strategy for communicating risk-related information to the public, Congress, and other key stakeholders during public health crises, etc. Communication and consistent messaging was definitely a huge issue during this outbreak and just from my experience in healthcare during the outbreak, the dissemination of information was muddy at best and only served to add fuel to an already chaotic fire. “Four thousand HHS personnel were unable to travel to West Africa, the panel said, because of untested regulations outlined in the Affordable Care Act (ACA). Additionally, US government workers who wanted to work more than 30 days overseas had to complete a training course before traveling to an outbreak country. The course had only limited availability, making it difficult to deploy staff quickly”. The report is definitely worth the read and includes some great explanations for each finding and excellent timelines throughout the outbreak.

Following the aforementioned report and lessons learned, HHS released their Ebola Response Improvement Plan. The plan breaks down priorities and actions into six main categories: global health security and coordination with international partners, incident management and operation coordination, public health and healthcare response, risk communication, medical countermeasures, and response funding. Aside from supporting the Global Health Security Agenda (GHSA), the improvement plan discusses codifying infectious disease emergency management under the National Response Framework (NRF) via the Biological Incident Annex and better defining roles during such events. I found the healthcare side particularly interesting as plans included the pre-identifiction of healthcare facilities that can be used for quarantine, isolation, and treatment, strengthening waste management interagency concept of operations, refining personal protective equipment (PPE) guidance and developing a mechanism to coordinate the purchase of PPE by federal partners, etc. Regarding risk communication, HHS will “Identify and train a cadre of personnel from across HHS that have public health expertise and a thorough understanding of, and fluency in, health crisis and risk communications to serve as spokespersons during domestic or international public health and medical emergencies. This training can draw upon a body of work developed since the 9/11 terrorist attacks”. Overall, the report addresses several key categories, vulnerabilities, and makes correlations to the independent panel report. 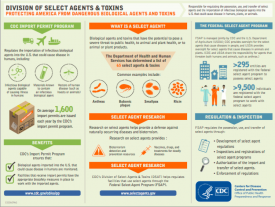 The term “select agents” gets thrown around a lot, but what really does it mean and why is it so important? The CDC recently published two new segments in their “Public Health Matters Blog” that gives the basics on select agents, why work involving them is so important, and how the U.S. is doing in terms of global health security. “While it might be easier to avoid handling deadly pathogens and poisons in the first place, scientists have to work with them in order to better understand how to protect people from their effects. Research leads to discoveries that save lives – for example, when we create vaccines to protect from exposure to smallpox or when we’re able to track mutations of killer diseases like Ebola.” The blog discusses the role of the Federal Select Agent Program and lab safety, specifically the response practices in the event of a “whoops” moment. They also reference the findings from the recently published 2015 Annual Report of the Federal Select Agent Program and the continuous commitment to both safety and increased transparency. While this may seem like the tourist’s brochure to select agents and concerns over lab safety, it’s a nice strategy to better educate the public on the work surrounding these agents and the safety mechanisms in place. They also have a pretty fantastic infographic accompanying the post. The next Public Health Matters blog talks about how the U.S. is handling global health security. Centering around a photo that includes colleagues from the HHS and USDA, the blog discusses the Joint External Evaluation Team. The team, which is part of GHSA, works to assess how well the U.S. is prepared to prevent, detect, and respond to major public health threats. The best part about this team is that its work is independent and unbiased. The group spent five days in May assessing federal response capabilities, the CDC’s work and technical practices, etc. Aside from finding excellent reporting mechanisms within the CDC and other federal agencies, they also found that we could improve in a few areas: “communicating risks quickly and consistently with communities across the country, combining and utilizing data from multiple surveillance systems, including systems that monitor human, animal, environmental, and plant heart, and conducting triage and long-term medical follow-up during major radiological disasters”.

Drug Resistant Bacteria in Rio Waters
Jaws made you wonder if it was safe to go back into the water, but multi-drug resistant organisms (MDRO’s) are the growing threat for aquatic events at the approaching Rio de Janeiro Olympic Games. Researcher Renata Picao believes that the resistant bacteria made their way into the waters from sewage that local hospitals have been dumping. The research team tested water samples from 2013 to 2014 for MDRO’s and found carbapenem-resistant Enterobacteriaceae, or CRE. Sadly, the team doesn’t believe these levels have changed and with reports of athlete infections and irritations due to water contact, that’s likely an accurate prognosis. CRE is easily one of the nastiest MDRO’s and is extremely difficult to treat, with a report citing 50% mortality rates. The concerns over Zika and drug-resistant organisms are just two in a laundry list of trouble that has followed Brazil’s Olympic bid – athlete mugging, financial issues, and unfinished buildings. While the acting governor of Rio has expressed concerns, he says that the city will be ready for the games, but also encouraged visitors to moderate their expectations. While some athletes have quit the games due to concerns over Zika, it’s interesting that the concern for drug resistant organisms in the water haven’t raised the same fears.

Is the Biological Weapons Convention Falling Behind?
While the Eighth Review Conference of the Biological Weapons Convention (BWC) won’t be until November, the Preparatory Committee for the Review Conference is next month. One can only imagine the scientific and technological advancements since the BWC was initiated in 1972. Despite some countries struggling to develop effective national biosecurity programs, the growing capabilities of CRISPR and other biotech breakthroughs have moved full-steam ahead. Many are pointing to the U.S. challenges to merely agree on an oversight system for gain of function research. “The discussions of science at the experts’ meetings should be split off into a separate dedicated parallel track. This is the best way to create the necessary time. Even then, it will be impractical to cover all relevant ground across the sciences, so each year a specific topic — CRISPR editing, say — should be considered. Researchers and scientific bodies should present the facts, and then discuss the implications with government officials at the experts’ meeting.” Between dual-use technologies of concern and CRISPR-Cas9, the BWC must adapt to the rapid pace of the biotech industry and the growth of biosecurity developments.

What Direction is the Zika Storm Blowing?
The ECDC has released their sixth Zika update, which discusses several uncertainties that prove difficult when developing response options. Some of these uncertainties include: “all the currently reported sexual transmission events are linked to symptomatic index cases. There is no evidence of transmission by asymptomatic sexual partners” and “there is growing evidence that Zika virus infection during the first and second trimester is associated with increased risk for central nervous system malformation of the foetus. The risk associated with infection during the third trimester is unknown. Therefore, Zika virus infection should be considered as a risk throughout the entire duration of pregnancy.” Fort Benning is trapping and freezing mosquitoes in effort to help the military combat the virus and quickly identify any positive Aedes mosquitos. National Institute of Health supported researchers will be monitoring Zika virus exposure in a group of U.S. athletes, coaches, and Olympic Committee staff attending the games in Brazil. A recent news poll found that most Americans aren’t worried about Zika, in fact they were more worried about Ebola than they currently are about Zika. When asked what they’re doing to limit exposure to Zika, 67% of respondents said they’re waiting to see if it is necessary. The CDC has reported 1,133 cases of Zika virus in the U.S. as of July 6th, 2016. You can also find the full transcript of President Obama’s remarks on Zika on July 1st, following an update from his public health team.

Zika Funding – The Disease Slush Fund
GMU Biodefense MS student Greg Mercer talks about the funding issues related to Zika virus in this week’s commentary. Greg’s overview of the funding struggles reveals a deeper issue when it comes to public health funding and emergency outbreaks. While the U.S. likes to paint itself as a global force for epidemic response, the truth is that we’ve struggled to combat government dysfunction and partisanship. “Government agencies might be funded by the fiscal year, but there’s no telling what the CDC, NIH, and others will have to fight next, not how big that fight will be.”

National Biosafety Systems – Case Studies
Researchers from the UPMC Center for Health Security released their report on case studies to analyze current biosafety approaches and regulations for Brazil, China, India, Israel, Pakistan, Kenya, Russia, Singapore, the United Kingdom, and the U.S. “In previous research, we found that there is a lack of international norms governing biosafety precautions for dangerous or especially contagious; by describing a variety of biosafety governance approaches in these nations, we hoped to find areas of commonality which could be further developed into international norms.” Five trends were identified during comparison of the ten nations – biosafety regulation exists in all ten nations, information availability was extremely variable, making comparisons difficult, the incentives behind biosafety regulation are varied, ranging from agricultural development to infectious disease control to biotechnology investments, advanced or synthetic biology is not consistently addressed by national-level biosafety policy, and funding information for biosafety was generally available. Aside from evaluating each nation, the case studies will aid in future evaluations by establishing nation-level biosafety norms.