Happy Holidays from your friends at the Pandora Report! We hope you have a lovely holiday weekend and enjoy this warm cup o’biodefense. If you’re still looking for the perfect gift for a microbe-loving person in your life, check out the latest holiday pack here.

International Criminal Court Adds Use of Biological Weapons to Rome Statute
Last week, during the Assembly of States Parties to the ICC, it was decided that three new crimes would be now be classified as war crimes within the Rome Statute. “The new war crimes added to the Rome Statute are, respectively, the use of biological and toxin weapons, the use of weapons causing injuries by fragments which in the human body escape detection by X-rays and the use of laser weapons causing permanent blindness. These weapons kill without discrimination or inflict very severe suffering. Their elevation to the rank of war crimes strengthens international law. The use of these weapons during armed conflicts will become even more difficult. The inscription of these new crimes in the Statute of Rome ensures also legal certainty to the victims and gives a specific recognition to their pain.” The Belgium Ministry of Foreign Affairs has come forward noting that “It was Belgium that had proposed these amendments to the Statute, the founding treaty of the ICC, as early as 2009. Belgium has tirelessly mobilized, through its diplomatic network and the voices of its foreign ministers, its ministers of justice and even its prime ministers to promote the adoption of these amendments.” 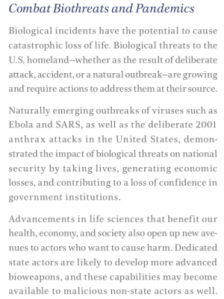 2017 National Security Strategy – Biodefense
Just in the nick of time, the National Security Strategy was released – and with a biodefense gem hidden on page 9! Pillar 1 (of 4) within the NSS includes a section on securing U.S. borders and territories, in which the “combat biothreats and pandemics” section is buried. Citing biological threats, whether it be natural outbreaks like Ebola, bioterrorism, or advancements in life sciences that have the potential to be mis-used, the NSS includes several priority actions. The three priority actions to combat biological threats are: “detect and contain biothreats at their source, support biomedical innovation, and improve emergency response. ”

Trump’s Biodefense Strategy – Naught, Nice, or MIA?
GMU biodefense MS student Janet Marroquin is taking a look at the Trump administration’s biodefense strategy and what the past year has shown us in terms of what we can expect. With the release of the NSS this past week, some direction is being given, but just how far have we come in terms of a true strategy? Marroquin delves into the nitty gritty and also gives us a holiday wish list for what we’d like to see on a biodefense strategy. She notes that “An important reform present in the proposed FY 2018 Federal budget is the call to dismantle the Academic Centers for Public Health Preparedness under the CDC and the distribution of its funds among state governments to support state-led public health preparedness.  Interestingly, this action seems to contradict expert recommendations to the federal government for the development of a centralized approach to health security.” In response to the release of the NSS, the Blue Ribbon Study Panel has released a statement and highlights, like Marroquin, the importance of a comprehensive approach.

Congrats to GMU’s Biodefense December Graduates!
We’re excited to announce the graduation of several GMU Biodefense students this winter. Congrats to our students graduating with a MS: Zamawang Almemar, Alexander Rowe, and Stephanie Smith – and congrats to those graduating with a Certificate in Biodefense: Mi Chung and Mary Oberlies. We can’t wait to see where the future takes you and the amazing biodefense adventures you’ll have! 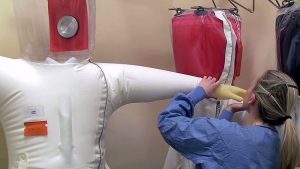 Federal Funding Resumes for Gain-of-Function Research
On Tuesday, it was announced that DHHS has ended the funding pause on GoF research. Suspended since the 2014 moratorium, guidance was released in January of this year by the White House Office of Science and Technology Policy (OSTP) for individual agencies reviewing research. While the OSTP P3C0 recommendations provided guidance for agencies looking to conduct, support, or planning to conduct such research, its sole purpose was “to recommend consistent and appropriate Federal agency review and reporting processes for the enhanced oversight of Federally funded research that is anticipated to create, transfer, or use enhanced pathogens with pandemic potential.” In fact, once agencies adopted a review process and satisfied such requirements, they could lift their moratorium on GoF research. It is this week’s NIH announcement however, that fully lifted the moratorium and provided framework for guiding funding decisions about such research (FYI – you won’t find many differences between the framework and the OSTP P3C0).  “The framework, condensed into a 6-page document, spells out a multidisciplinary review process that involved the funding agency and a department-level review group that considers the merits and possible research benefits and the potential to create, transfer, or use an enhanced potential pandemic pathogen (PPP).” Funding for GoF research on potential pandemic pathogens, like SARS, MERS, and avian influenza, was resumed jointly with the DHHS framework that seeks to guide funding of proposed research that would involve enhancing such pathogens. “The HHS P3CO Framework is responsive to and in accordance with the ‘Recommended Policy Guidance for Departmental Development of Review Mechanisms for Potential Pandemic Pathogen Care and Oversight’ issued on January 9, 2017  and supersedes the previous ‘Framework for Guiding U.S. Department of Health and Human Services Funding Decisions about Research Proposals with the Potential for Generating Highly Pathogenic Avian Influenza H5N1 Viruses that are Transmissible among Mammals by Respiratory Droplets’.” The new framework includes 8 criteria for department-level review, which includes “An assessment of the overall potential risks and benefits associated with the research determines that the potential risks as compared to the potential benefits to society are justified” and “The research will be supported through funding mechanisms that allow for appropriate management of risks and ongoing Federal and institutional oversight of all aspects of the research throughout the course of the research”.

GMU Biodefense Student Tackles USPS Safety
Speaking of awesome things GMU biodefense graduates are doing…Stephanie Smith is using her forensic chemistry background and new biodefense degree to tackle safety in the USPS. “I’m a forensic chemist by training, that’s what I’ve done my entire career,” she said. “I came to Mason to study the ‘bio-side’ of this complex advisor position, but I realized I was also expanding my knowledge beyond science and into the policy side.” Having studied a range of different topics like agroterrorism and biosurveillance during her time at GMU, Smith’s capstone project “was based on her idea that the method of detecting bioagents in the mail could be improved.” While she was working on her studies at GMU, she was also working at the USPS within the Security and Crime Prevention Group and was tasked with writing the job description for a new permanent scientific advisor position. “Once Smith wrote the job description for the new position of ‘Scientific and Technical Advisor, Dangerous Mail Investigations’ for the Postal Inspection Service, it was determined there was only one person qualified to fill a job that required knowledge of chemistry, biodefense, security and public policy. That would be Stephanie Smith. She got the job.”

2017-2018 PHEMCE Strategy and Implementation Plan
The latest Public Health Emergency Medical Countermeasures Enterprise (PHEMCE) SIP has been released, which highlights some of the priorities that the Department of Health and Human Services will focus on over the next five years. Within the SIP, you can find a summary of the major accomplishments, new activities, updates to the 2016 SIP activities, and specific information required annually under the Pandemic and All-Hazards Preparedness Reauthorization Act (PAHPRA). The latest SIP includes accomplishments from 2016 that include regulatory science management, Zika and Ebola response, international collaboration on MCMs, etc. Some of the new projects include Ebola response, bacterial threat projects like CARB-X, etc. You can also read the PHEMCE multi-year budget for fiscal years 2016-2020 here.

GMU Biodefense Students Visit DARPA
If you’ve ever wondered what it’s like to go inside the walls of the Defense Advanced Research Projects Agency (DARPA), this article is just for you! GMU biodefense professor Andrew Kilianski took students from one of his classes to visit DARPA and gain a better understanding of their biodefense efforts. Dr. Kilianski is currently a biological scientist at the DoD and his work focuses on combating current and future threats from weapons of mass destruction in addition to teaching classes on biosurveillance and virology in the GMU Biodefense graduate program. In this segment, biodefense MS student Janet Marroquin takes us on a tour of DARPA and some of the fascinating projects they work on. “These projects range from surveillance tools to diagnostics and therapeutics, using futuristic mechanisms such as a dialysis-like purification of pathogen-infected blood or unobtrusive nanoplatforms that continuously monitor the physiological state of the patient for the detection of infectious disease. ”

Preventing An “Outbreak Anywhere” From Becoming An “Outbreak Everywhere”
GMU Biodefense PhD student Saskia Popescu is addressing the trifecta of efforts within global health security – prevention, detection, and response. Drawing on the special edition Emerging Infectious Disease journal, she highlights the importance of prevention and the obstacles that are often met. “Prevention is the first component to health security, but in many ways, it is also the most difficult. Biological threats can come from anywhere: a naturally occurring outbreak, a laboratory accident, or even an act of biological terrorism. How do we prevent biothreats when they come from so many directions? Zoonotic diseases are one place to start as more than 60% of known diseases spread from animals and roughly 75% of new or emerging diseases in humans spread from animals.”

Is Captain America A Biological Weapon?
Attending the Biological Weapons Convention will make you ponder such things and Matt Shearer from the Johns Hopkins Center for Health Security is venturing down that rabbit hole. Article I of the BWC states that each state party will not develop, produce, stockpile, or otherwise acquire or retain “microbial or other biological agents, or toxins whatever their origin or method of production, of types and in quantities that have no justification for prophylactic, protective or other peaceful purposes;” and “weapons, equipment or means of delivery designed to use such agents or toxins for hostile purposes or in armed conflict.” Shearer poses a unique question about what constitutes a biological agent – what if there is no infection but rather a human who has been enhanced? “But normal humans, animals, and plants do not seem to count as “other biological agents” in the context of the BWC, but what about enhanced or modified versions like Captain America or, perish the thought, the accidentally enhanced Teenage Mutant Ninja Turtles? Have we been unwittingly cheering for bioweapons this whole time?”