TGIF and Pandora Report day! Tomorrow is World TB Day, in which we celebrate the progress made to eradicate TB, but also recognize the work that still needs to be done. Did you know that 53 million lives were saved through effective TB diagnosis and treatment from 2000-2016? In 2016 alone, there were nearly 500,000 cases of multidrug-resistant TB around the world and it takes $2.3 billion a year to fill the resources needed for existing TB interventions. If you happen to be traveling by air anytime soon, make sure to read these tips from public health experts.

How Prepared Are You For the Next Pandemic? Summer Workshop on Pandemics, Bioterrorism, and Global Health Security
Three days filled with global health security and all things biodefense from anthrax to Zika – what more could you want in a workshop? Learn from the top minds in the field when it comes to pandemic preparedness, vaccine development, biosecurity, etc. Between the centennial of the 1918 influenza pandemic, the recent horsepox synthesis, and the lift on the gain-of-function research moratorium, these three days will be packed with exciting topics and discussions. From July 18-20th, come get your biodefense on with us in Arlington, VA – registration prior to May 1st also gets an early bird discount! 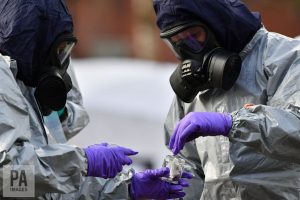 Shining A Spotlight On Soviet Nerve Agents
A nerve agent attack in the UK has made the poison, Novichok, a household name, but also pointed a very large spotlight on Russia’s scientists and defense labs. “Few experts in the rarefied area of chemical weapons defense are willing—or able—to shed further light on them. Information about the Novichok nerve agents is classified, says one U.S. military scientist who, like other U.S. government scientists, declined to speak with Science.” Whatever the plan, this failed attempt for the quick deaths of Skripal and his daughter have left many questions about delivery of the agent and how this heavily guarded secret nerve agent found its way onto UK soil. An article from The Trench discusses the use of these nerve agents, formal accusations from the UK, and compliance of the Chemical Weapons Convention (CWC). “The OPCW experts travel to the UK under Article VIII, 38(e), which qualifies their activity as a ‘Technical Assistance Visit’ to help with the evaluation of an unscheduled chemical (the Novichock agent) is not listed in any of the three schedules in the Annex on Chemicals).  They will likely visit the sites of investigation and collect their own samples (if for no other reason than to validate any laboratory samples they may receive), take all materials and documents related to the forensic investigation back to the Netherlands where the sample will be divided up and sent to two or more designated OPCW laboratories.” On Wednesday, Russian diplomatic and military officials reportedly accused the UK of hiding evidence in the investigation of the attack. “Speaking to a lecture hall of diplomats, Vladimir Yermakov, deputy head of the ministry’s department for non-proliferation, suggested that the UK was ‘hiding facts’ about the case that may later ‘disappear’.” British diplomat Emma Nottingham noted that “Russia has offered us so far no explanation of how this agent came to be used in the United Kingdom and no explanation as to why Russia has an undeclared chemical weapons programme in contravention of international law,”.

Pandemic Preparedness
“Are we prepared for the next pandemic?” Such a question pulls at the string of a much larger web that tends to leave many feeling unsettled. The scary truth is that we’re not ready. We know there will be a pandemic – history, science, and society, all tell us this. Encroachment on nature, increasing globalization and populations, and struggles against more frequent threats like seasonal flu and even antimicrobial resistance, all reveal a severe vulnerability to infectious diseases. Lessons from HIV, Ebola, and Zika, are just the latest and on the centennial of the 1918/1919 influenza pandemic, many hope that we learned from such events and can help prevent future ones. Predictions trickle across many sectors – loss of healthcare worker lives, financial and economic struggle, etc. “Such a pandemic could cause a global stock market crash that obliterates the livelihoods and savings of millions of survivors. ‘A severe and prolonged global pandemic could … hit global GDP by as much as 5-10% in the first year,’ noted the authors of the Bank of America/Merrill Lynch 2015 Global Pandemics Primer report. Oxford Economics has suggested that the cost of a global pandemic, including spillover across industry sectors, could be as great as $3.5tn – an impact far greater than the magnitude of the great financial crisis of 2008.” With funding for the GHSA in peril, the question of preparedness becomes even more relevant…and pessimistic. The tricky thing about infectious disease threats is that we’re not sure where the next one will come from. We have hints and sometimes we’ll get a whiff of which way the wind is blowing before the storm hits, but ultimately, there is so much we can’t predict. Given these challenges, prevention efforts, like those of the GHSA, should be seen as even more critical. Infectious disease prevention strategies are always a good return on an investment. It’s also the unexpected that impacts disease control and surveillance efforts. Local news is one that doesn’t often come to mind when considering epidemiology and infectious disease forecasting. “Epidemiologists rely on all kinds of data to detect the spread of disease, including reports from local and state agencies and social media. But local newspapers are critical to identifying outbreaks and forecasting their trajectories. ‘We rely very heavily on local news. And I think what this will probably mean is that there are going to be pockets of the U.S. where we’re just not going to have a particularly good signal anymore,’ said Majumder, a Ph.D. candidate at the Massachusetts Institute of Technology.”

GMU Biodefense MS Open House & PhD Information Session
Looking to earn a Masters or PhD in a field that’s at the nexus of foreign policy and public health? GMU Biodefense is just the place for that. We’re hosting two information sessions for our biodefense graduate degrees – the MS Open House is next Wednesday at 6:30pm (Arlington Campus) and the next PhD Information Session is on Wednesday, April 18th at 7pm, in Arlington, VA. These are great opportunities to hear from faculty and students in each biodefense program about not only the application process, but also the classes and what it’s like to study what you love!

CDC Selects New Director
Dr. Robert R. Redfield was just announced as the new director for the CDC. Redfield will take over for interim director Dr. Ann Schuchat, who many were hoping would take post. The new director has a background in HIV and is said to be a dedicated researcher and physician. Unfortunately, Redfield also comes with a rather novel history for CDC directors – he has never worked for a public health department. “Critics also point to a resume marred with controversy. In the 1990s, Redfield was accused of falsifying data about an experimental HIV vaccine he worked on. He was eventually cleared of those charges, but the data had to be corrected.” On Tuesday, Sen. Patty Murray (Wash.) raised concerns regarding his appointment, noting that, “This pattern of ethically and morally questionable behavior leads me to seriously question whether Dr. Redfield is qualified to be the federal government’s chief advocate and spokesman for public health.”

Brazil Calls for Country-Wide Yellow Fever Vaccination
Brazil has been battling a yellow fever outbreak since 2017 and vaccine shortages have only fueled the challenges of outbreak response. “Brazil announced yesterday that all citizens should be vaccinated against yellow fever. The country is currently experiencing a spike in cases in what has shaped up to become the largest yellow fever outbreak to hit the country since the 1940s.The Associated Press (AP) reported that Ricardo Barros, Brazil’s health minister, said all 27 of Brazil’s states will be targeted in a vaccination campaign that will aim to reach 78 million people by 2019. Before the announcement, the vaccine was recommended in all but four Brazilian states.”

Importance of GHSA
GMU Biodefense PhD student Saskia Popescu wants clinicians to understand the importance of the GHSA and why US investment is critical. “Like many components of public health and infectious disease, the importance of prevention is often forgotten until an outbreak occurs. Hospital preparedness and infection prevention were not necessarily ‘big ticket’ items in the United States until we had Ebola in Dallas, Texas, but it only takes 1 laboratory incident to remind us of the importance of biosecurity and biosafety.”