GMU Biodefense Master’s Open House
On Thursday, November 15th, at 6:30pm, we’ll be hosting an Open House on the MS programs within Schar School. This is a great chance to learn about the online and in-person biodefense MS programs, admission criteria, and chat with faculty. Make sure to RSVP here!

Review of the Blue Ribbon Study Panel “Fits and Starts: Reactionary Biodefense”
GMU Biodefense graduate students Alexandria Tepper and Michael Krug review the latest Blue Ribbon Study Panel event in case you missed it on October 9th. “The event kicked off with an in-depth recollection by Sen. Daschle of October 16th, 2001; the day that letters containing Bacillus anthracis spores were opened in the Hart Senate Building. “Confusion and chaos” were the words the senator used to describe the situation that ensued when one of his interns opened the letter and aerosolized the fine white powder, exposing 28 staff members to the deadly B. anthracis. He expressed the helpless feeling that overcame him when he received a phone call describing the situation. As he rushed to the Hart Senate Building, he recalled the disorganization of the federal investigators during the bio-threat, as responders were devastatingly unprepared for such an event. The lack of standardized protocols became startlingly evident when the exposed staff members were cleared to return home in the same clothes worn during the attack. Fortunately, no one was killed in this specific attack and Sen. Daschle attributed that to a select few individuals who stepped up to lead the treatment and recovery process.”

Event Summary and Analysis for “The Implications of Chemical Weapons Use in Syria”
George Washington University graduate student Wardah Amir discusses the IISS event hosted last week regarding CW use in Syria. “The 2013 deal would not have been possible without Russian cooperation. At the time U.S.-Russian interests overlapped on eliminating Syria’s chemical weapons program. Unfortunately, U.S. and Russian cooperation did not last long enough to hold users of chemical weapons in Syria accountable. While the OPCW Executive Council believes in working towards accountability, Russia’s unwillingness is shown by its failure to cooperate.The deal was proof that international cooperation could help achieve results. The framework inevitably led to the creation of the OPCW Fact-Finding Mission, the Declaration Assessment Team, and the OPCW-UN Joint Investigative Mechanism.  Without Russian cooperation, or the active participation of the international community on addressing chemical weapons use, results will be harder to achieve.”

Technologies to Address Global Catastrophic Biological Risks
The Johns Hopkins Center for Health Security has just released a new report that discusses how investment in 15 promising technologies could make us more prepared and better at responding to biological incidents. “While systems to respond [to an outbreak] are in place in many areas of the world, traditional approaches can be too slow or limited in scope to prevent biological events from becoming severe, even in the best of circumstances,” wrote the Center authors. “This type of response remains critically important for today’s emergencies, but it can and should be augmented by novel methods and technologies to improve the speed, accuracy, scalability, and reach of the response.” The technologies were grouped into 5 categories – disease detection, surveillance, and situational awareness, infectious disease diagnostics, distributed medical countermeasures manufacturing, medical countermeasure distribution, dispensing, and administration, and medical care and surge capacity. Within the report, there is a focus on technologies like remote sensing for agricultural pathogens, hand-held mass spectrometry for diagnostics, synthetic biology for manufacturing medical countermeasures, etc. The authors note that “To realize the promise of these technologies will require significant dedicated effort and investment. While this is occurring for vaccine development, and to some extent for surveillance, other needs for pandemic and GCB event prevention and response must be addressed if we are to confront these threats in a serious way. One possible approach to closing these gaps would be through the formation of a consortium of technology developers, public health practitioners, and policymakers aimed at understanding pressing problems surrounding pandemic and GCB risks, and jointly developing technology solutions.”

Blue Ribbon Study Panel Report – Holding the Line on Biodefense: State, Local, Tribal, and Territorial Reinforcements Needed
The Blue Ribbon Study Panel on Biodefense just released their latest report, which underscores the need for first responders. “How we respond to biological events – especially those large in scale and impact – is now out of balance with how we prepare,” said former Secretary of Health and Human Services Donna Shalala, Panel Member, who co-chaired the January 2018 meeting in Miami that informed many of the report’s recommendations. “There are a number of steps we can take right now to better position SLTT governments, as well as hospitals, pharmacies, and other private sector organizations to respond immediately and then in tandem with federal support.” Within the report, there are eight recommendations, including – Unify and establish a new National Emergency Medical Services system, including the creation of a National Emergency Medical Services Agency at the Department of Health and Human Services,  Improve distribution of the Strategic National Stockpile and other stores of pharmaceuticals, equipment, and essential medical supplies, with enhanced training and assured access to pharmacy readiness data, etc.

Post-Florence Giant Mosquitoes
Like something out of a horror movie, North Carolina is getting hit with “mega-mosquitoes” following Hurricane Florence. “‘These giants have zebra-striped legs and are two to three times as big as the normal bloodsuckers encountered during summer, said Michael H. Reiskind, an assistant professor in the Department of Entomology at North Carolina State University. ‘Definitely noticeably bigger,’ he said. ‘If you see mosquitoes often, then you’re going to say, ‘Wow, that’s a big mosquito’.” While they don’t carry human diseases, these massive mosquitoes can carry dog heart worm.

Bacteriophages and Their Application For Fighting Antimicrobial Resistance
Researchers and medical providers alike are searching for the next effective tool against antibiotic resistant infections. One such tactic is bacteriophage therapy – a natural enemy to bacteria. Laura H. Kahn writes that “In addition to minimal governmental research funding, the pharmaceutical industry hasn’t been interested in developing phage therapies because of regulatory and patentability concerns. But these concerns can be readily addressed. Phages adapted to newly evolved, resistant bacteria could be analogous to updated influenza vaccines that get approved each year without undergoing time-consuming Investigational New Drug (IND) approval processes. Novel technologies to isolate, bioengineer, and produce phages at scale could be patented. For example, phages have been engineered to reduce bacterial biofilms.” 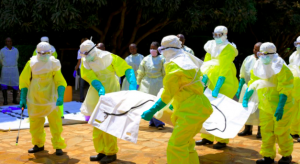 Ebola Outbreak Update
Seven additional cases were announced in the DRC on Wednesday, bringing the total to 188 and 118 deaths. “The DRC’s ministry of health said the recent spike in cases in these areas confirms that case contacts during the initial wave of cases in August and September who avoided follow-up and vaccination have now been infected. Beni has been a hotbed of anti-response activity, especially the neighborhood of Ndindi. ‘The factors contributing to this situation are mainly misinformation, non-collaboration of the population with the response teams and insecurity,’ the Health Ministry said in its daily update. ‘More than two months after the declaration of the epidemic, the community continues to prevent the safe and dignified burial, and at-risk contacts still refuse vaccination and 21-day follow-up.'” As of Wednesday, “four administrative measures will be put in place in Beni, the new epicenter of the outbreak, the health ministry said. The steps include making it illegal to harbor a suspected Ebola patient, using security forces to monitor and implement safe burials, requiring families to show official death certificates before obtaining a burial certificate, and obligating all health professionals (including traditional healers) to report suspected cases to Ebola treatment centers.”