Happy Friday fellow fans of biodefense! We’re grateful to share some of the latest health security news with you this week – McDonald’s has set a timeline to cut antibiotics in their meat supply as a measure to combat antimicrobial resistance.

Preventing Pandemics & Bioterrorism: Past, Present, & Future – Video
We’re excited to announce that you can now access the recording of our event featuring ASPR’s Dr. Robert Kadlec. If you missed this event, here’s your chance to learn about the history of biodefense programs in the United States, lessons learned from the 1918/1919 pandemic, and future implementation of the National Biodefense Strategy. 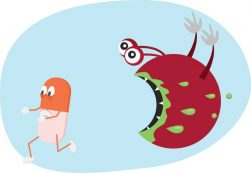 India Works to Tackle AMR
A new research study found that “strains of hypervirulent, carbapenem-resistant Klebsiella pneumoniae associated with extremely high mortality rates” were found at an Indian hospital through the efforts of researchers at Christian Medical College in Tamil Nadu. “Of the 86 isolates tested, 27 (31.3%) had a positive string test, which indicates hypervirulence. But PCR tests found that only 3 of the string-test-positive isolates contained the rmpA2 hypervirulence gene, and none contained the rmpA or magA hypervirulence genes. The authors say the absence of these genes could indicate that other genes were responsible for the hypervirulence. The most common carbapenem-resistance gene found in the isolates wasblaNDM.” On the heels of this news, the Indian government is reportedly banning the use of colistin in livestock. “The UK-based Bureau of Investigative Journalism and Livemint, an Indian business news website, report that India’s National Antimicrobial Resistance Action Plan committee, the country’s top drug advisory body, and government agencies that oversee agriculture and food safety have all recommended that the Indian government ban the use of the last-resort antibiotic in livestock in an effort to preserve the drug’s efficacy in humans. An advisor to the committee told the Bureau of Investigative Journalism that the Indian government is in the processing of crafting a rule on colistin use.” While it will take considerable more work to stop the spread of antimicrobial resistance, such findings and efforts are critical.

NTI – Preparing for Biological Threats: Are We Ready to Prevent a Global Catastrophe
NTI has released an extremely informative and helpful page with details regarding the cost of bio threats, quotes from reports, consequences of such events, etc. The best though, is a navigation tool that explores how every and any country is vulnerable. Make sure to check out this helpful website!

Blue Ribbon Study Panel – Fighting the Next War: Defense Against Biological Weapons
The Blue Ribbon Study Panel on Biodefense will be hosting this meeting on February 5th, 2019, from 10am to 3:30pm at the Council on Foreign Relations. They are holding the “meeting to get a better understanding of the responsibilities and requirements for federal biodefense efforts that are unique to the U.S. Department of Defense. We want to know more about the role of the Department in implementing the National Biodefense Strategy. Participants will share their experiences regarding the current threat environment, research and development programs, and the Department’s biodefense policies.”

Ebola
The Ebola outbreak in the DRC continues to stress response efforts with the unique security situation that is an active war zone. “It was like a horror film,” Anoko said of the Nov. 16 attack in the city of Beni, the epicenter of the outbreak. “Attacks by armed groups happen on a daily basis across Congo’s North Kivu province, where the Ebola virus has been spreading since August, infecting almost 500 people and killing more than 270. It is now the second-biggest outbreak ever, after the vast epidemic that swept through Guinea, Sierra Leone and Liberia between 2014 and 2016.” The WHO has had to address growing concerns regarding the number of women and children that have been disproportionately infected during this outbreak as females account for 62% of cases and within that patient subgroup, 18 were pregnant and 7 were breastfeeding. As of December 12th, the DRC’s health ministry reported 5 new cases and 9 new deaths, with 100 people being investigated as potential cases. “Outbreak totals now stand at 505 cases, including 298 deaths. The new cases include two in Katwa and one each in Komanda, Musienene, and Mabalako. At least one of the newly recorded deaths occurred in the community, in Katwa, an event that heightens the risk of virus spread, the DRC said. Officials also issued two health alerts about possible disease spread in Goma, the capital and largest city in North Kivu province. For weeks, officials have warned that Ebola could spread in the city.”

CEPI Partnership to Create Vaccines Against Emerging Infectious Diseases
The Coalition for Epidemic Preparedness Innovations (CEPI) and Imperial College London just announced a new partnership “to develop a self-amplifying RNA (saRNA) vaccine platform that enables tailored—just-in-time—vaccine production against multiple viral pathogens. The idea behind this saRNA approach is to harness the body’s own cell machinery to make an antigen (ie, a foreign substance that induces an immune response) rather than injecting the antigen directly. Currently, vaccines can take 10 years or more to develop. They must go through many phases of development—including research, discovery, pre-clinical testing, clinical testing, and regulatory approval. However, epidemics, by their nature, are sporadic, unpredictable and fast-moving. Through this partnership, CEPI aims to develop vaccines against new and unknown pathogens (also referred to as Disease X) within 16 weeks from identification of antigen to product release for clinical trials.” The partnership is worth up to $8.4 million and has the potential to change global preparedness efforts against emerging and unknown pathogens.

Release – National Strategy for Countering WMD Terrorism
The White House has just released the latest WMD national strategy which you can read here. “The National Strategy for Countering WMD Terrorism describes the United States Government’s approach to countering non-state WMD threats, emphasizing the need for continuous pressure against WMD-capable terrorist groups, enhanced security for dangerous materials throughout the world, and increased burden sharing among our foreign partners. The United States will draw on the full range of our nation’s and partner nations’ capabilities to place WMD and associated materials and expertise beyond the reach of terrorists. We will also strengthen our defenses at home to ensure the peace and security to which every American is entitled. Although not every class of weapon that falls under the rubric of ‘WMD’ is capable of producing truly large-scale casualties, chemical, bio- logical, radiological, and nuclear weapons each have characteristics that set them apart from conventional arms. Rudimentary chemical weapons, for instance, may be difficult to disseminate widely and may thus be inefficient killing agents, yet their gruesome effects make the psychological impact of these weapons especially potent.” Some of the objectives include: states and individuals are deterred from providing support to would-be WMD terrorists, the U.S. is able to identify and respond to technological trends that may enable terrorist development, acquisition, or use of WMD, etc.

Meat Allergy? You May Have Been Bitten By A Tick
Maryn McKenna lifts back the curtain on a spike in meat allergies and how a pesky vector is increasingly found to be the cause. “McGraw is allergic to the meat of mammals and everything else that comes from them: dairy products, wool and fibre, gelatine from their hooves, char from their bones. This syndrome affects some thousands of people in the USA and an uncertain but likely larger number worldwide, and after a decade of research, scientists have begun to understand what causes it. It is created by the bite of a tick, picked up on a hike or brushed against in a garden, or hitchhiking on the fur of a pet that was roaming outside. The illness, which generally goes by the name ‘alpha-gal allergy’ after the component of meat that triggers it, is a trial that McGraw and her family are still learning to cope with. In much the same way, medicine is grappling with it too.” 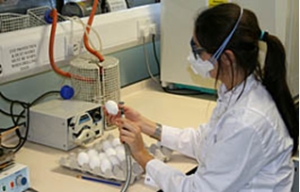 Pandemic Influenza Vaccine – Investing in Preparedness
Creating a vaccine that can combat pandemic flu is sort of the holy grail in bio preparedness. It’s something we desperately want but haven’t been able to develop…yet. ASPR and BARDA have been working hard to fix this gap in preparedness. “BARDA began pre-pandemic influenza vaccine procurement in 2005 for vaccines that would provide protection against emerging avian influenza H5N1 viruses posing a significant pandemic threat.  But a decade later we were compelled to ask how long would those stored vaccine components continue to be safe and effective at providing protection and when would they need to be replaced? The results of the ‘BARDA Ready In Times of Emergency’ (BRITE) study have just been finalized. The study is the first of its kind in the world and provided the data needed to answer that important preparedness question. H5N1 influenza vaccine stored for more than a decade in the National Pre-Pandemic Influenza Vaccine Stockpile (NPIVS) is still safe and immunogenic.”