Have you ever wondered what some of the most deadly diseases looked like in person? Check out this video depicting some of these germs and how they’d appear if you sat next to an infected person. Fortunately, this week was full of disease-filled media like this germ history video regarding the golden age of germs and how humans cause pandemics (spillover anyone?)

Public Health’s Greatest Threats
We all have opinions regarding the greatest global threat- especially in terms of public health. Is it obesity? Cancer? Exposure to toxins or new emerging diseases? What about bioterrorism or bioerror? Dr. Larry Brilliant is an epidemiologist who focuses on the worst disease throughout history. He notes that the greatest threats to public health can be divided into biological and socio-political. “In the last 30 years, there have been at least 30 heretofore unknown viruses that have jumped from animals to humans, for worrying reasons Brilliant attributes to modernity and our increase in animal protein consumption. Still, the socio-political threats are the more immediately dangerous. There are centrifugal forces at play that are pushing society to two extreme camps. The domestic and global division caused President Trump’s ‘America First’ mentality and disregard for public health leaves us vulnerable to new viruses that, if they aren’t detected early enough, could be the next pandemic. ‘Right now because of the re-organization and nationalism… and dislike for the United Nations and its agencies, I think we’re in a period of grave vulnerability,’ says Brilliant.” Dr. Brilliant points to the reality that public health threats aren’t just biological, and as we saw with the 2014/2015 ebola outbreak (and Zika), the socio-political response can hinder or help public health efforts. While we’re always vulnerable to new diseases, are we becoming increasingly more susceptible from a socio-political standpoint?

ASM Biothreats 2017
From synthetic biology to national bioterror emergency response, the ASM conference was packed with biodefense goodies. We’ll be providing a detailed overview regarding certain sessions and the conference as a whole, so make sure to keep your eye out next week!

Find Out What New Viruses Are Brewing In your Backyard 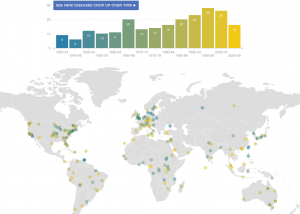 NPR is looking at what causes pandemics and where new diseases tend to spring up. By reviewing EcoHealth Alliance data, they note that within the past sixty years, the amount of new diseases appearing has quadrupled. Scarier yet, the number of outbreaks occurring each year has more than tripled since 1980. “We’re in a hyperinfectious disease world,” says epidemiologist Michael Osterholm, who directs the Center for Infectious Disease Research and Policy in Minneapolis. While the tools for surveillance and detection have gotten better, it also became apparent to researchers that old diseases are returning from the grave, while emerging diseases are transgressing into new regions. “So the big question is: Why? Why is this era of new diseases happening now? ‘Well, we’ve been boiling the frog for a long time. Eventually, it’s cooked,’ says Toph Allen, a data scientist with EcoHealth Alliance, a nonprofit that is trying to prevent pandemics by looking for diseases in wildlife. Wait. We’re boiling the frog? You mean, humans are responsible? Yes. Many scientists say we, humans, are to blame for this new disease era. That we’re responsible for turning harmless animal viruses into dangerous human viruses.” Unfortunately, it seems that humans have become especially skilled at causing spillover.

Center for Global Security Research Student Internship
Calling all GMU biodefense students! Lawerence Livermore National Laboratory’s Center for Global Security Research is looking for a student intern! The center has “openings for undergraduate and graduate students and recent bachelors or master’s level graduates within one year, to engage in practical research experience to further their educational goals.” The student may conduct “research in the fields of nuclear engineering, computational sciences, materials science and engineering, cyber security, interactive data mining, political science and international relations to support United States (US) policy and decision makers in developing strategies for national and international security. The Center for Global Security Research’s (CGSR) mission is to provide technology, analysis, and expertise to aid the US government in preventing the spread or use of weapons of mass destruction (WMD), and examining the policy implications of proliferation of WMD, as well as deterrence.”

Zika’s New Strategy – Spillback?
With over 5,000 cases in the U.S. alone, the Zika virus outbreak may be slowing, but it’s not gone. We’ve talked about spillover before, but what about spillback? We tend to worry about diseases spilling over from animals into humans, but what about the opposite direction? Researchers are now worried about Zika spillback into monkeys. “In areas where Zika infections are prevalent among humans and mosquitoes are abundant, the virus may be transmitted to wild primates, disease ecologist Barbara Han said February 6 at the American Society for Microbiology Biothreats meeting. If the disease gets established in monkeys or other wild primates, the animals may serve as reservoirs for future human outbreaks.” As scientists work to study this process and establish potential at-risk species, it’s a helpful reminder that infectious diseases like to keep us on our toes. Or should I say, paws?