Happy Friday! We’re excited to announce that the early registration discount for the Summer Workshop on Pandemics, Bioterrorism, and Global Health Security has been extended to July 1st, so don’t miss out on the chance to attend at a discounted rate. Before we dispense our weekly dose of all things biodefense, just a friendly reminder that the Pandora Report will be on hiatus next week, but will return the week of June 15th.

Ebola Outbreak in DRC: Updates
Community resistance and mistrust have been reported in the DRC as response efforts and vaccination are underway. Similar issues were also seen during the 2014 West Africa outbreak. Thankfully, cases are reportedly dropping following additional testing capacity. The latest WHO situation report announced a total of 54 cases and 24 deaths, with a case fatality rate of 46.3%. International response to the outbreak is being evaluated and the role of the United States is reportedly less dominant, which have many pointing to the lack of a NSC point person. “The United States has played much less prominent role in the latest Ebola outbreak, raising some questions about the nation’s commitment to global health security but also reflecting that the global capacity to respond to such an outbreak has become much more robust following West Africa’s massive outbreak, the Kaiser Family Foundation (KFF) said today in a policy brief.” The KFF report also notes that “The Trump Administration had installed a well-known global health expert, Admiral Tim Ziemer, as the lead on biosecurity and global health at the National Security Council (NSC) in 2017, but his position was recently eliminated as part of an overall reshuffling of NSC staff under the leadership of new National Security Advisor John Bolton; the move was coincidentally announced the same week the DRC Ebola outbreak was declared. Without this position, other NSC staff have been tapped to lead the U.S. response to the outbreak but have not made any public statements, and no public statements have been made by the current CDC Director. Whether and how to designate a point person on outbreaks is a debate that predates the DRC Ebola outbreak, but the ongoing outbreak has added some urgency to this discussion.” As the deployment of the vaccine is ongoing, many are wondering – what took so long? Schar biodefense PhD alum Christopher K. Brown discusses the barriers to vaccine development and deployment to the public in Africa. Brown notes that”Vaccine development is a complex process. It involves both public and private partners and requires that a variety of funding issues be considered. Competing market forces influence how a vaccine project advances—from discovery to laboratory and clinical trials, and later to registration, regulatory approval, and large-scale manufacturing and implementation.” Further more, Brown highlights that “even comparing Ebola to other diseases that disproportionately affect African countries, it is hard to argue that Ebola is, or ever has been, the best disease on which to focus vaccine research and development resources.” 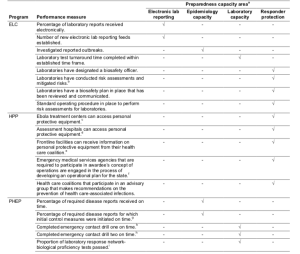 GAO Report: Funding and Performance of Key Preparedness and Capacity-Building Programs
The latest GAO report is evaluating the preparedness efforts of HHS to protect the U.S. against infectious disease threats. “Over a 15-year period, HHS awarded about $3 billion to states and others to respond to specific disease threats, such as Zika, Ebola, and H1N1 pandemic influenza. HHS awarded an additional $18 billion for more general public health preparedness and capacity-building activities, such as getting ready for infectious disease threats and terrorist events. We assessed preparedness efforts of states and others and found mixed results. For example, most responder protection and coordination efforts met goals, while efforts in other areas were less consistent.” The GAO report assessed three major preparedness and capacity-building programs within HHS – Epidemiology and Laboratory Capacity for Infectious Diseases (ELC), Hospital Preparedness Program (HPP), and Public Health Emergency Preparedness (PHEP). The preparedness capacity areas were electronic lab reporting, epidemiology capacity, laboratory capacity, and responder protection. “The majority of awardees (states and other jurisdictions) that reported on performance measures in the responder protection area met all performance targets in this area. However, awardee performance in the other three preparedness capacity areas was mixed.”

Economic Burden of Seasonal Flu
Need more reason to get your seasonal flu shot? A new study assessed the economic burden of seasonal flu in the United States through health outcome rates from 2015. The results? “The estimated average annual total economic burden of influenza to the healthcare system and society was $11.2 billion ($6.3–$25.3 billion). Direct medical costs were estimated to be $3.2 billion ($1.5–$11.7 billion) and indirect costs $8.0 billion ($4.8–$13.6 billion). These total costs were based on the estimated average numbers of (1) ill-non medically attended patients (21.6 million), (2) office-based outpatient visits (3.7 million), (3) emergency department visit (0.65 million) (4) hospitalizations (247.0 thousand), (5) deaths (36.3 thousand) and (6) days of productivity lost (20.1 million).” Not surprisingly, seasonal flu is responsible for considerable economic burden, on top of morbidity and mortality within the United States. Just another reason to get your flu shot and encourage others to do the same.

Insufficient Infection Prevention Staffing in Healthcare
A new study finds that hospital infection prevention and control programs are woefully understaffed in the United States. Schar Biodefense PhD student and infection preventionist Saskia Popescu, discusses why this is problematic, not just for healthcare-associated infections, but ultimately hospital preparedness for infectious disease threats. “The 2014 Ebola cluster in Dallas, Texas, underscored the importance of infection prevention practices and preparedness in health care, which adds another layer of complexities to health care programs. Infection preventionists (IPs) who make up the back-bone of these teams are responsible for a range of duties that include surveillance and investigation of health care-associated infections, environment of care rounding, national reporting for quality metrics, isolation rounding, communicable disease reporting, and more.”

CRISPR – Could It Make Jurassic World?
The latest Jurassic Park movie, Jurassic World, is being released soon, and within this installment lurks a genetically modified dinosaur. But just how realistic is it for scientists to bring back an extinct animal…or modify one? “The idea of resurrecting extinct creatures using CRISPR has been discussed at length since the technology was developed. These conversations have largely focussed on the woolly mammoth, which last roamed the Earth 3,300 years ago. In 2015 a team of researchers working at Harvard University took a significant step toward the creation of a creature that would, on an initial approximation, look like a woolly mammoth – a woolly mammoth 2.0 of sorts. Researchers have clearly not yet triggered the live birth of a woolly mammoth, but we have already seen the birth of a living creature previously declared extinct. The Pyrenean ibex, or bucardo goat, was once found in the mountains of northern Spain. The last ever bucardo, affectionately named Celia, died in the year 2000.”

DPRK-U.S. Summit: Back On
The summit between the U.S. and DPRK is back on and is scheduled for June 12th in Singapore. “‘The key outcome of this meeting is to specify what the U.S. and North Korea mean by ‘denuclearization’ and if there is any overlap between these definitions,’ said Gregory Koblentz, associate professor at the Schar School of Policy and Government at George Mason University. ‘If not, then summit still in doubt’.” President Trump is reportedly looking forward to the summit, but many are anxious to see the outcome of such a meeting.