On June 19, 2018, the National Academies of Sciences, Engineering, and Medicine (NASEM) held a public briefing timed with the release of a new report titled, Biodefense in the Age of Synthetic Biology. The panel – comprised of the committee chair, Dr. Michael Imperiale, and four authors of the report, Dr. Patrick Boyle, Dr. Peter Carr, Dr. Diane DiEuliis, and Dr. Jill Taylor– gathered to present their research to the public and provide an opportunity for an in-person and online question and answer session.

During this briefing, the panel discussed the study’s concern-assessment framework (Figure 1). The framework consists of four factors that can be used to assess the level of concern for current and future synthetic biology capabilities. Notably, rather than attempting to assess the levels of concern presented by various technologies (e.g., CRISPR/Cas9), this framework focuses instead on assessing capabilities “that potentially pose a concern because of the harm they might enable.”[i]

While the framework draws on previous works (e.g., Tucker 2012and the 2004 Fink report), what makes this report unique is its use of the Design-Build-Test (DBT) process as the foundation for its capability-assessment. DBT is the “iterative process of designing a prototype, building a physical instantiation, testing the functionality of the design, learning from its flaws, and feeding that information back into the creation of a new, improved design.”[ii]Specifically, the committee found it useful to conceptualize current and future technological developments in terms of the ways in which they enable the DBT cycle, granting that it is entirely possible for some technologies to have impacts across    multiple phases of the DBT cycle.[iii]For example, the committee identified potential points of concern in all phases of the DBT process in their analysis of the level of concern relating to the re-creation of known pathogens.[iv] 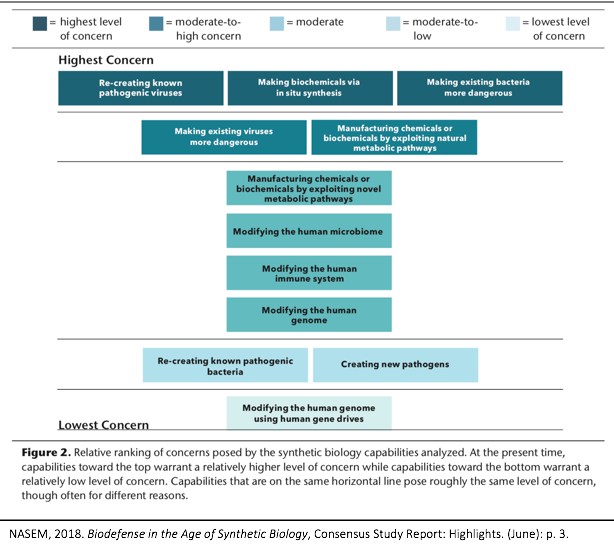 Interestingly, the committee ranked the modification of the human genome using gene drives as one synthetic biology capability with the lowest level of concern. During the briefing, the committee stated that, “because gene drives require sexual reproduction to propagate thorough a population, and would require generational timelines, [we] are not particularly concerned about it because the committee was more concerned with the present and near future.” However, the report does not consider the level of concern related to the modification of plants, animals, or insects using gene drives, though these capabilities may also have significant implications for human health because the scope of the study is limited to “activities that could directly threaten human health or the capacity of military personnel to execute their missions.”[v]

Following the committee’s briefing, the panel was asked what surprised them the most during the process of developing this report, to which Dr. Boyle responded, “the level of concern relating to making biochemicals via in situ synthesis.” The committee ranked this capability with the highest level of concern. Of particular concern is the possibility of engineering gut microbes to make biochemicals within the cells of commensal organisms and deliver them to the human hosts to cause harm.[vi]While synthesizing biochemicals in situ was ranked with medium levels of concern for both its usability as a weapon (limited ability to make introduced microbes persist in the microbiome) and the requirements of actors (it would require high levels of expertise), the levels of concern for the usability of the technology and the potential for mitigation were ranked medium-high and high, respectively. With advancements in our understanding of the microbiome, the committee expects this capability to present high levels of concern in the near future.

Noticeably absent from this framework are the potential benefits and safety concerns related to developments in synthetic biology. As stated by Dr. Imperiale and Dr. DiEuliis in the Q&A portion of the briefing, “looking at the benefits and safety of enabling technologies was outside the scope of this report.” Other concerns that fall outside of the scope of this report include: comparing the risks related to synthetic biology to other types of threats, modification of plants, animals, and the pathogens that affect them, and human modification that benefits the individual (e.g., enhancement). Only activities that could directly threaten human health or the capacity of military personnel to execute their missions and other concerns that are relevant to all U.S. citizens – at home and abroad, in civilian and military contexts were within the scope of this report. While the committee recognized the potential benefits of synthetic biology (such as the development of new pharmaceuticals, organs for transplant, and fuel production), the committee chose not to attempt to compare, or weigh, the potential benefits with the potential risks. One reason presented during the briefing for this decision was that they have no intent to curtail legitimate synthetic biology research.

Yet, perhaps the most influential aspect of this report is its focus on capabilitiesrather than technologies. Much of the biosecurity literature focuses on dual-use technologies, or dual-use research of concern (DURC), which may obscure the distinction made by the committee between capabilities and technologies found in this report. As such, this report adds a unique contribution to the field of biodefense, pushing conceptualization of biosecurity issues beyond DURC. In this way, this report opens the field to a broader range of concerns, implications, and governance mechanisms.

[i]NASEM, 2018. Biodefense in the Age of Synthetic Biology. National Academy of Sciences: p. 40.

[ii]NASEM, 2018. Biodefense in the Age of Synthetic Biology. National Academy of Sciences: p. 20.

[iii]NASEM, 2018. Biodefense in the Age of Synthetic Biology. National Academy of Sciences: p. 27.

[vi]NASEM, 2018. Biodefense in the Age of Synthetic Biology. National Academy of Sciences: p. 84.