This week, I was provided with the brilliant opportunity to tour the Outbreak Exhibit at the Smithsonian Museum of Natural History with the impetus for the Exhibit, Dr. Daniel Lucey. Along with enjoying and learning from the Exhibit itself, I also got an augmented visit with hearing his firsthand account of working in an outbreak, treating patients, and working with other responders. Continue reading to learn more about Dr. Lucey, the Outbreak Exhibit he inspired, and his insights and experiences as an infectious doctor who regularly responds to outbreaks all over the world. As you read, imagine progressing slowly but vociferously through the Exhibit with Dr. Lucey as he sports an Médecins Sans Frontières vest and a custom-made ballcap listing all eight viruses of the Exhibit.

Dr. Daniel Lucey is a Senior Scholar with the O’Neill Institute for National and Global Health Law, an adjunct Professor of Medicine-Infectious Diseases at Georgetown University Medical Center, and a research associate in Anthropology at the Smithsonian Museum of Natural History. Dr. Lucey’s courses focus on Outbreaks, Pan-Epidemics, and Pandemics. Since 2001, he has served as an infectious disease physician on the ground with:

Lucey completed his infectious disease training and Master of Public Health at Harvard and his medical residency at the University of California San Francisco and San Francisco General Hospitals after medical school at Dartmouth and work at Bara Hospital in Soweto, South Africa in 1979 and 1982.  His residency in San Francisco was during the initial recognition of the AIDS pandemic in 1982-85, starting before our species had discovered HIV (in 1983) but when the virus had already discovered us. He served as an Attending Physician in Infectious Diseases in San Antonio, Texas and at the National Institutes of Health, and as the Infectious Disease Chief at the 900-bed Washington Hospital Center in DC 1998-2002 during 9/11 and Amerithrax. On 7 August 2014, Lucey proposed an Exhibit on Epidemics to the Smithsonian National Museum of Natural History and he worked extensively with the Smithsonian team on the Exhibit’s content and over 30 colleagues around the world who contributed their own expertise and perspective.

The 4,250 square-foot Outbreak Exhibit commences with an indubitable statement, “Our world is interconnected more than ever before – by global travel and trade, technology, and even our viruses.” And the world is getting even more connected with advancements in technologies for transportation, communications, agriculture, biology, and so on. The Exhibit is comprised of two main parts: virus showcases with specific examples and content on the dissemination of these diseases, and how practitioners and experts across disciplines and countries are working together to curb the frequency and severity of outbreaks. The curator is Dr. Sabrina Sholts, a tenured anthropologist at the Smithsonian National Museum of Natural History.Dr. Johnathon Epstein of the EcoHealth Alliance in New York City is the lead scientist and veterinarian for the Outbreak Exhibit.

The exhibit features eight viruses along with details of respective infectious disease outbreaks and responses:

The unifying theme of the Exhibit is One Health. The Centers for Disease Control and Prevention (CDC) define the concept of One Health as a collaborative, multisectoral, and transdisciplinary approach — working at the local, regional, national, and global levels — with the goal of achieving optimal health outcomes recognizing the interconnection between people, animals, plants, and their shared environment. Though, infectious disease expert Dr. William B. Karesh best captured the spirit of One Health, “Human or livestock or wildlife health can’t be discussed in isolation anymore. There is just one health.”

Lucey uses the term synergy-of-strengths to describe the unified One Health approach, as illustrated by the immense number of persons with varieties of expertise that created the Outbreak Exhibit. 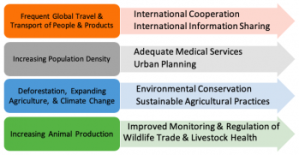 As humans, we cause outbreaks, but we can also stop them. The human-based factors spurring outbreaks and the counteractivities to quell future outbreaks include:

The accelerating and heterogenous spread of endemic, emerging, or novel infectious diseases threatens all aspects of human security – economic, nutritional, health, environmental, personal, community, and political – but also environmental and animal health. The time to start preparing for outbreaks and, preferably, working to prevent infectious diseases passed many moons ago. The Outbreak Exhibit exposes the grave need for improving infectious disease prevention, early detection, and rapid response as every nation on the globe continues to dawdle toward that goal. Despite the countless high-level shortcomings, countless individuals and organizations are fighting all over the world to prevent outbreaks and treat those suffering from infectious disease.

If Lucey takes the integral of all lessons learned from a 40-year career spanning from work in Soweto in 1979 and continuing through multiple fights against pan-epidemics into 2019, the answer would be three words: Anticipate, Recognize, Act.

Dr. Lucey’s modus operandi is to go to the pathogen before it comes to us. He and many other practitioners and experts respond to outbreaks all over the world in a variety of contexts – including violent ones – to help treat and contain the spread of a variety of infectious diseases. The keys to reducing the frequency and severity of future outbreaks are preparedness, prevention, early detection, and rapid response.

Dr. Lucey shared a story about a young boy named Momodu who was a patient at the Médecins Sans Frontières (MSF) Ebola clinic where Lucey served. Momodu lost most of his family to the outbreak, but he survived thanks to the diligent work of the MSF staff, who worked seven days a week for at least 12 hours each day to care for their patients. A nurse treating Momodu discovered his enjoyment of drawing, so she found some paper and coloring tools for him to use. At first, Momodu could muster the energy for a single drawing, but as his condition improved with supportive care, he was able to complete multiple drawings in a day. Momodu’s drawings were both an enjoyment and, perhaps, a motivational tool for the boy but also a prognostic indicator for the medical staff as Momodu’s health status improved. Momodu recovered enough to be released from the clinic and commemorate his survival by adding his handprint to a wall with the handprints of other survivors. Momodu’s story is tragic, but also inspirational as an example of the positive impact resulting from a rapid response with skilled and committed professions.  The grueling work of many thousands of Ebola fighters aimed to maximize the number of success stories like Momodu so that, hopefully, as many patients as possible can recover and return to their homes with their likewise recovered and healthy families. Ideally, this work will facilitate the prevention of outbreaks.

Olga Jonas, Economic Advisor at the Harvard Global Health Institute, is quoted in the Exhibit, “We need to start investing much more in outbreak prevention…Poorer countries lack the basic resources to identify and control outbreaks early, so they are hit the hardest.” Prevention efforts require great amounts of expertise and supplies, all of which rack up substantial bills; however, the costs accrued in an outbreak for which a community is ill-prepared and ill-equipped to manage is drastically greater, both economically and epidemiologically. And, when we cannot prevent an outbreak, be it naturally-occurring or intentionally released, we must be prepared to handle it. As evidence of Jonas’s statement, the newly released Global Health Security Index concludes that no country is prepared for epidemics or pandemics. All nations must boost funding and resources for the prevention, preparedness, detection, and response of outbreaks.

Previous outbreak detection work and responses over the last couple decades resulted in the same failures, instigating essential and belated updates to the standard response strategy.  For example, the CDC’s team sent to the 2014-16 Ebola Virus Disease epidemic in West Africa included specialists of the usual variety – epidemiology, infection control, laboratory analysis, medical care, emergency management, health communication – but also specialists in information technology, behavioral science, anthropology, logistics, and planning. The inclusion of specialists beyond the traditional medical and public health fields was a successful strategy of the 2014-16 Ebola response.

The Exhibit also highlights the criticality of the affected community playing a central role in outbreak response. During the West Africa Ebola epidemic, health educators went door-to-door to teach those in affected communities about symptoms, prevention methods, and available medical services. In a more creative manner, artists created large murals in areas with low literacy rates to present information about Ebola symptoms and prevention. Members of affected communities are also integral members of prevention, early detection, and rapid response efforts. These individuals put themselves at great risk – physically and socially – to aid the people of their home areas.

Dr. Lucey worked with Jackson K. P. Naimah, a local physician’s assistant, during the Ebola outbreak in Africa. Jackson’s story, partially featured in the Exhibit, encapsulates the assiduousness, bravery, and sacrifice required of those in outbreak work. Before staff were dispatched to the clinical tent treating Ebola-confirmed patients, Jackson would remind his staff of safety protocols and attempt to boost morale as every shift was long and brutal. It is worth noting that the estimated case fatality rate for Ebola in 2014 was approximately 70%, a dismal figure for both patients and care providers. On top of the fight to save lives or, at least, provide adequate palliative care to patients, medical staff also feared contracting the infection, compounding the difficulty and stressfulness of already overloaded staff. Jackson’s most dangerous experience during the response was delivering a preterm fetus from an Ebola-confirmed young woman; the baby did not survive. Even outside of the clinic, staff could not escape the impacts of the disease. Workers were stigmatized by their communities to the point that Jackson hid himself on his way to work.

A future Outbreak Exhibit Including Bacteria and Parasites?

The Program for Monitoring Emerging Diseases (ProMed) HealthMap, which is featured in the present Exhibit, provides patrons with a visual tool to see the impact and uniquity of virus diseases across the world but also in their home area. For those of us in the Appalachian Region, there are over two dozen infectious disease alerts. The HealthMap team amalgamates outbreak data from ProMedMail, World Health Organization, GeoSentinel, World Organization for Animal Health, Food and Agriculture Organization of the United Nations, EuroSurveillance, Google News, Moreover, Wildlife Data Integration Network, Baidu News, and SOSO Info. Currently, there are 377 alerts for all diseases – viral, bacterial, fungal, parasitic – throughout the world. In other words, there exists clear potential for expansion or conversion of the existing Outbreak Exhibit.

Though plans for a phase two are not known to be in the works, an exhibit – somewhere in the world – including pandemic bacteria and parasites seems a like a natural progression to continue the Smithsonian’s work on pandemic education and awareness. Currently, the Exhibit is scheduled to remain in the Museum through 2021. The Museum also offers a do-it-yourself (DIY) version of the Outbreak Exhibit free of charge to communities across the world. This free, print-on-demand exhibition consists of graphic panels, interactive media and printable 3-D models; it available in English, French, Spanish, Modern Arabic and Simplified and Traditional Chinese. Led by Dr. Sabrina Sholts and her many colleagues, the DIY has been shown in over 100 locations in the USA and approximately 40 nations so far.

In the words of Daniel Lucey, the answer to the question of what outbreaks are next is written on the wall at the end of this Exhibit, “What’s next is already here; we just haven’t recognized it yet.”

2 thoughts on “A Tour with Dr. Daniel Lucey – Outbreak: Epidemics in a Connected World Exhibit at the Smithsonian Museum of Natural History”