Welcome to 2020! We’re excited to start the new year with a short newsletter to keep you up to date on all things biodefense.

Alcatraz of Viruses
The Island of Riems in the Baltic Sea, once inhabited by the Nazis for biological weapon research, is now a heavily restricted site for German scientists to develop vaccines against viruses. The island hosts the Friedrich Loeffler Institute, Germany’s National Institute for Animal Health, which is a hub for the study of pathogens like rabies, African swine fever, and Ebola, and maintains the primary objective of preparing for future infectious disease outbreaks. The deputy head of the Friedrich Loeffler Institute, Franz Conraths, dubbed the island to be the “Alcatraz of Viruses.” Given its nickname-sake, the island is subject to stringent security protocols in order to safely contain all pathogenic samples and protect researchers and visitors. Since 2008, the German government has invested over $300 million in the Institute for infrastructural upgrades; there are now 89 laboratories and 163 stables for the research animals within the facility. Animal welfare is an important pillar for the Institute, hence their efforts to minimize animal research and minimizing the suffering of any tested animal. That said, the potential for their vaccine research to save millions of human and animal lives, protect the livelihoods of farmers, and alleviate global hunger, according to the head of the diagnostics department, outweighs the desire to eliminate animal testing.

NAS Workshop Proceedings: Improving International Resilience and Response to Chemical, Biological, Radiological, and Nuclear Events
In October 2017, the National Academies of Sciences, Engineering, and Medicine (NAS) coordinated an international, science-based workshop in Tokyo regarding resilience to Chemical, Biological, Radiological, and Nuclear (CBRN) events. The CBRN resilience workshop, in collaboration with Niigata University and the Japan National Research Institute for Earth Sciences and Disaster Resilience (NIED), aimed to “increase understanding of the communication, interoperability, and coordination issues that arise among various international stakeholders who are responsible for responding to CBRN event.” Partakers included experts and representatives from the government/public sector, private sector and industry, international organizations, academia, and NGOs. The event included a simulation as well as various plenaries covering topics such as lessons from past CBRN events and strengthening collaborative capacity. The workshop included a Resilience Exercise that used an explosion created by the collision of a large Liquid Natural Gas Tanker into a chemical depot on the shore near the Tokyo Motor Show as its base scenario. The explosion was compounded when the adjacent industrial complex ignited and debris oil was launched into Tokyo Bay. The flames and smoke of the chemical fire travelled inland toward Tokyo, home to about 14 million people, and smoke is further spreading toward the Tokyo Big Sight complex. Additional simulation components include the challenges of responding to a cascading CBRN event and the difficulty stimulating multi-party discussion for rapid response and international cooperation. Examples of some of the issues recognized during the workshop include delayed information sharing, incongruent definitions and terminologies across organizations, and the lack of defined roles and responsibilities for response. 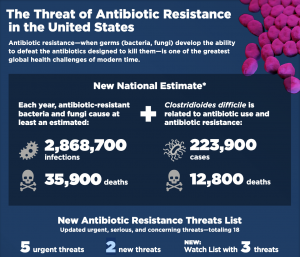 Antimicrobial Resistance – A New Plan For A New Year?
Since the CDC announced their latest report and findings that each year 2.8 million Americans are infected with a drug-resistant organism, 35,000 of whom later die, we can safely say we’ve got a big problem. Antimicrobial resistance (AMR) isn’t new though and the problem has been boiling up for decades however it seems that we’re starting to truly take it seriously. From rivers to traveling patients, it’s hard to escape resistant microbes. New efforts to invigorate surveillance/reporting, as well as stewardship initiatives and even addressing the drying pipeline of antibiotics, are all tactics that have been employed. In fact, this latest piece is the one that is perhaps the most damning – big pharma has all but fled the antibiotic R&D field and those start-ups courageous enough to try, are increasingly falling upon financial ruin. “Antibiotic start-ups like Achaogen and Aradigm have gone belly up in recent months, pharmaceutical behemoths like Novartis and Allergan have abandoned the sector and many of the remaining American antibiotic companies are teetering toward insolvency.” Sadly, this is only adding to the issue as it paints a grim image for those considering any investment in antibiotic R&D. Many are calling for government intervention to help address the push-pull dynamics of antibiotic development – noting that “If this doesn’t get fixed in the next six to 12 months, the last of the Mohicans will go broke and investors won’t return to the market for another decade or two,” said Chen Yu, a health care venture capitalist who has invested in the field. Another component though is the heavy push on stewardship and prescribing practices, which often makes hospitals and providers weary against using new antimicrobials. Adding to this sentiment, Dr. Rick Bright, BARDA Director and Deputy Assistant Secretary for Preparedness and Response, wrote on the need for better diagnostics for resistant infections. Dr. Bright shares his own experiences with a simple-turned-complex infection that required several antibiotics. From delays in diagnostics/treatment, to being on six antibiotics, this is a great personal account of what it’s like to have a resistant infection and the inherent limits of existing diagnostics. “The gardening incident gave me personal insight into the many challenges that confront medical professionals and every patient fighting a resistant infection. I am more committed than ever to overcoming this challenge, to identifying solutions, and to partnering with private sector to get ahead of antimicrobial resistant infections and protect our nation’s health security. I hope more potential industry partners will look closely at the problem and join me by partnering through programs like CARB-X, BARDA DRIVe and other BARDA-supported initiatives.”

Outbreak Dashboard
Flu activity continues to rise in the United States, as the CDC reported 4.6 million flu illnesses, 39,000 hospitalizations, and 2,100 deaths in this season. The Ebola outbreak in the DRC has also been growing, as 4 new cases were recently reported in Kalunguta, which is frustrating as the area had previously gone 63 days without a new case.