August is here and so are the Zika cases…it does seems rather ominous that the Rio Olympics are starting a week after the confirmation of locally-acquired U.S. cases of Zika virus. Despite the outbreak and the concerns over water safety, the games must go on?

Syria Chemical Weapons Attack
Two chemical attacks were reported earlier this week in northern Syria. The first attack occurred in the city of Saraqeb, where chlorine gas-filled cylinders were dropped in a residential area. Russia has already begun denying any role in the attack and while officials haven’t formally called the Saraqeb incident a “chemical attack”, the evidence is mounting. “Evidence points to the Assad regime because the attack came from the sky and the opposition doesn’t have any aircraft, the source added. In the second alleged incident, the Syrian government claimed that ‘terrorist groups’ carried out a gas attack that killed five people in the old town of the besieged city of Aleppo on Tuesday afternoon, according to the state-run news agency SANA.” The second attack caused the death of five individuals and is considered a counteroffensive from Syrian regime forces and Russian allies. A physician tending to victims injured in Saraqeb noted that their symptoms are consistent with those of chlorine poisoning. On Wednesday, the Russian military informed the U.S. that “rebel forces were responsible” for the attacks.

Russia’s Frozen Anthrax Problem
Over ninety people are currently under healthcare observation and surveillance in the Yamalo-Nenets region of Siberia, related to an outbreak of anthrax. Eight cases have been confirmed and a young boy died on Monday from the outbreak that is believed to be associated with an infected reindeer carcass. While anthrax is a  naturally occurring bacteria in the soil and can be endemic in certain regions, the heatwave in Siberia is believed to have caused a decades-old reindeer carcass to become exposed. As a result of the exposure, thousands of reindeer have also been infected and officials are investigating the release of the anthrax spores into the environment from the carcass that was found in the 75-year-old permafrost. Siberia’s Governor, Dmitry Kobylkin, has declared a state of emergency and specialists from the Russian Chemical, Radioactive, and Biological Protection Corps have been called into assist with outbreak control and disposal of infected animals. A mass veterinary vaccination program is also underway to protect animals in northern Russia.

Spillover Special & Human Economic Activity
Wednesday night saw the premiere of the PBS documentary, Spillover, which focused on the impact and rise of zoonotic diseases. Given the recent Ebola outbreak and news of locally-acquired Zika virus cases, this documentary comes at an precarious time. Aside from a few dramatic moments, the documentary was both informative and visually captivating. It was refreshing to see the One Health approach to outbreaks within a documentary. The filmmakers appeared to have taken great care to present the complexity of the spillover process and the importance of global surveillance and the shock humans have on the environment. Between the documentary and Sonia Shah’s new article, the impact of human activity on microbes is becoming a much more prevalent and unavoidable topic. Shah points to an increasingly globalized economy and the glaring reality that sick people do in fact get on airplanes and spread their germs, These are the obvious points in the transmission chain though and she notes that we tend to forget the role of foreclosed homes, imported tires, and decorative bamboo as factors in disease transmission. “Today, abandoned properties and deteriorating infrastructure, brought on by housing crises and climate change, similarly threaten us with epidemics of mosquito-borne pathogens such as Zika.” Shah also points to the need to assess the public health implications of our “built environment the way we assess the environmental impact- before construction begins.” While we consider our carbon footprint, are we considering our epidemic one too?

UK’s HIV Gamechange with PrEP
A recent high court ruling that NHS England can pay for PrEP (pre-exposure prophylaxis) is being marked as a victory for HIV/AIDS campaigners in the UK. PrEP is a medication that can be taken daily to help people, who are at a very high risk of contracting HIV, lower their chances of infection. According to the CDC, “A combination of two HIV medicines (tenofovir and emtricitabine), sold under the name Truvada, is approved for daily use as PrEP to help prevent an HIV-negative person from getting HIV from a sexual or injection-drug-using partner who’s positive. Studies have shown that PrEP is highly effective for preventing HIV if it is used as prescribed. PrEP is much less effective when it is not taken consistently.” The court ruling is especially important as it will not only put pressure on pharmaceutical companies to lower the cost of the drug, but will now be available through the National Health Services (NHS), meaning that it will be widely available and accessible to a far wider range of people. “Condoms are cheap, but among some high-risk populations they are not used consistently. About 4,000 more people acquire HIV in the UK every year. The average cost of a lifetime of treating each one is put at about £360,000. The National Aids Trust brought the high court case following anger and consternation among campaigners after NHS England said it would not fund PrEP because it did not have the power to do so. It argued that it was the role of local authorities, which have been given control of public health measures including reducing smoking and family planning, as well as HIV prevention. Local authorities said they did not have the money to pay.” Accessible HIV prophylaxis is a huge step in prevention and despite the plans of NHS to appeal the decision, they are still putting aside funds for the cost of the medication. 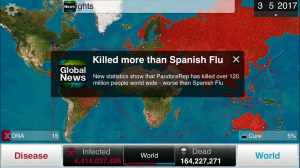 Since we’re still reeling from the loss of prime-time contagion drama, nuclear systems engineer and aspiring biodefense wonk, Greg Witt, is helping us through this dark time via the enjoyable but inaccurate world of biodefense in gaming. Greg’s review of several popular video and board games will give you some great options for your next gaming adventure. “With pathogens like Zika, Ebola, and West Nile now household names, biodefense has rarely been more culturally relevant. Depictions of biodefense topics in popular culture are not limited to traditional media, though; numerous video games and board games have been released in the past few years in which biodefense plays an important role.” Discussing video games like Tom Clancy’s The Division and its underlying premise that is almost identical to Operation Dark Winter, to two of my personal favorites – Plague Inc. and Pandemic, Greg gives a tour through the minefield of biodefense gaming. Rest assured though, he points to the scientific failures and epidemiological snafus that plague these games, but do not ultimately deter our enjoyment while bringing biodefense to the general public.

Zika Updates
Following last week’s news regarding a growing number of locally acquired cases in Florida, it was also reported that 41 U.S. military members have contracted Zika. “All cases were transmitted while abroad and one of the military service members is a pregnant female. Under Pentagon health policies, female service members are permitted to move out of countries where Zika exists.” Here’s a helpful little field guide for identifying the mosquitoes that are known to transmit Zika. A new model used by researchers from Northeastern University is pointing to a vastly underestimated amount of Zika in the U.S. They note that there is probably “way more Zika in the U.S. than has been counted”. Case counts are especially challenging in a disease that leaves many asymptomatic and unlikely to be tested. In response to the growing number of locally-acquired cases (currently at 14 cases) in Miami-Dade County, there will be aerial spraying for mosquito control.  The CDC has reported 1,825 total Zika infections in the U.S. as of August 3rd and has issued a travel warning for the Miami area. President Obama also pleaded with Congress to “do its job” and approve funding to fight the growing outbreak. Donald Trump was also recently asked about how he would handle the outbreak, noting that Florida Governor, Rick Scott, “seems to have it under control”.