A leaked report to the UN Security Council from the Organization for the Prohibition of Chemical Weapons, states that Syrian President Bashar al-Assad gave the order for the use of chemical weapons in 2015. The ECDC is seeing the initial cases for the 2015/2016 flu season, so make sure to get your flu shot! Science is sharing six science lessons for the next president. A new study finds that the correct antibiotics are only given half the time for common infections. Make sure to celebrate One Health Day on November 3rd!

Spillover: Ebola & Beyond Film Screening and Discussion
Don’t miss this great event at the National Museum of Natural History on Tuesday, November 15th from 6:30-8:30pm. If you loved the PBS documentary this summer, now is your chance to listen to a panel of experts discuss how they track diseases internationally and locally. “The film extends to the new frontiers of disease detection, prevention, and containment, and travels the world with virus hunters who are tracking old enemies while vigilantly looking out for new foes.” Featured speakers will include Vanessa van der Linden, Anthony Fauci, Yvonne-Marie Linton, and LaQuandra S. Nesbitt. Make sure to register before the event if you’d like to attend. 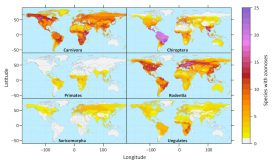 If you enjoyed the Spillover documentary, check out this one (from the same team at the Howard Hughes Medical Institute who brought you Spillover) on Nipah virus hunters and their use of bat populations to track the disease. It’s a great film on epidemiology, One Health, and how we can study diseases in bat populations to predict outbreaks in humans. The HHMI has all sorts of wonderful disease-tracking goodies, like this one on the patterns of zoonotic diseases or an interactive on viruses. HHMI has some great interactive and fascinating learning tools for adults and children alike. Nothing like a little zoonotic disease lesson before bedtime, right? 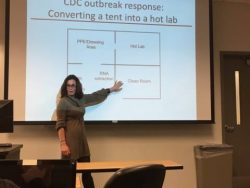 This week GMU was fortunate to hold an informational session by MetaBiota in which Dr. Kimberly Dodd discussed the organization and what life is like working on shifting emerging infectious disease response to prevention. GMU Biodefense MS student Greg Mercer was able to  listen to her experiences that range from the front lines of virus chasing to work on PREDICT and the factors that lead to zoonotic spillover. Dr. Dodd deployed to Uganda as part of the CDC’s response to the 2012 Marburg virus outbreak and to Sierra Leone during the West African Ebola outbreak. She described the challenges of trying to set up a BSL-4 equivalent laboratory in the field and the stressed of working with dangerous pathogens and noted that even in an outbreak of a high fear-factor disease like Ebola, there is often an international outpouring of volunteers. Experts are enthusiastic to help both for humanitarian reasons and the promise of cutting edge research to be done. Her experiences responding to outbreaks in the field prompted her interest in what preventative measures can be taken to forecast, identify, and mitigate outbreaks faster. She described her work on USAID’s PREDICT project, which seeks to catalogue viruses with potential to become pandemics. In its first 5 years, PREDICT sampled 56,000 animals, ran 400,000 diagnostics, and detected 984 unique viruses, 815 of which were novel. This new data was fed into Healthmap. In later pahses, PREDICT will go on to more closely examine the human-animal dynamics of spillover events.

Fears and Misperceptions of the Ebola Response System during 2014/2015 Outbreak in Sierra Leone
We’re still learning lessons from the worst Ebola outbreak in history, but will we actually apply this knowledge or continue to make the same mistakes? Public perception of public health response systems is a vastly important aspect of any outbreak response, however researchers are pointing to the severity it had on containment in 2014/2015. This study focuses on Sierra Leone and the barriers that prevented people from trusting and utilizing the Ebola response system that was established during the height of the outbreak. Researchers found that most people feared calling the national hotline for some one they believed to have Ebola as it would result in that person’s death. People tended to self medicate if they developed a fever and assumed it was not Ebola. “Fears and misperceptions, related to lack of trust in the response system, may have delayed care-seeking during the Ebola outbreak in Sierra Leone. Protocols for future outbreak responses should incorporate dynamic, qualitative research to understand and address people’s perception”

Estimating the BioTech Sector’s Contribution to the U.S. Economy

While the biotech sector has opened the floor for questions over dual-use, there’s no denying its growth. U.S. biotech sector revenue is estimated to have grown on average more than 10% per year over the past decade, which is faster than the rest of the economy..much faster. Data collected from various public and private sources allowed Robert Carlson to pain a much larger picture of what biotech is contributing to the U.S. economy. He found that total domestic U.S. revenue generated by biotech in 2012 reached at least $324 billion, which is the equivalent of >2% of GDP. Biotech revenue growth was >5% of annual U.S. GDP growth every year between 2007 and 2012. While the field is obviously growing, the rapid acceleration also means that there will be decreasing costs and more access to more powerful technology. “Governments around the globe are grappling with the desire to benefit from biotech-driven economic development, while simultaneously facing questions about who should have access to which technology and under what circumstances.” It’s important to not only support and monitor the technologies, but also facilitate data and reporting within the industry as these measurement deficiencies fuels biosecurity concerns. “Alongside the preexisting bioeconomy, we are building a system composed of inherently ‘dual-use’ engineering technologies that will constitute critical infrastructure for the future economy. Assuming that the revenue and growth estimates above are borne out with improved measurement and analysis, biosecurity is now clearly synonymous with economic security. The focus of biosecurity policy must shift from protecting specific targets from specific threats to securing the bioeconomy as a system that increasingly drives economic growth and employment and, ultimately, enables humans to thrive on a global scale.”

Hospitals Add Sinks to Help Fight Infections – Bad Move
Adding more easily accessible hand washing stations is one of the strategies to combating poor compliance and growing infection rates. Unfortunately, there have been some unintended consequences of upping the sink volume. Several hospitals throughout Baltimore, the Netherlands, and Shanghai have noted an increase in infections after adding more sinks (especially in patient rooms). Biofilms were a growing issue, which draws attention to the importance of facility and environmental service maintenance. I was a bit disparaged to see that the article points to the presence of non-sterile water from sinks in rooms with immunocompromised patients. Patients that are severely neutropenic are usually placed into positive pressure rooms (under protective precautions) and almost all hem-oncology units have special water filters on everything in the patient’s room (shower, sink, etc.). The concern for legionella is always an issue for those with weakened immune systems and while it’s important to cut down as much environmental exposure as possible, it’s impractical to think there should be sterile water. Another aspect of this is that patients in pre-op immune-suppression or post-op recovery will be exposed to germs – it’s a simple fact. If you’re concerned about sinks, then the patient should either be in a protective precautions room or you should not allow visitors. A sink is a small piece of the puzzle when it comes to patients that aren’t severely neutropenic. Sink design and cleaning is hugely important, which is another component to hospital infection control as anytime water is temporarily shut off, there needs to be water treatment plans in place, etc. It’s nice to see attention being brought to the environmental aspects of sinks and infection control, however one big aspect of the problem is also that people typically don’t wash their hands correctly. Yes, most people don’t spend the 15-20 seconds correctly lathering, washing all the nooks and crannies of their hands, etc. Needless to say, it takes a village to stop an infection and just one tiny moment to cause one – sinks are just one piece of the pie. 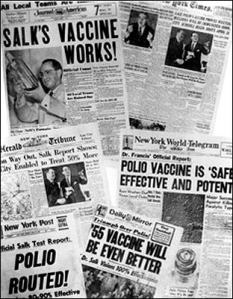 Global eradication of a disease is never easy, however efforts to rid Africa of polio have encountered barriers that are allowing the disease to resurge. Nigeria has seen lingering polio as a result of “porous borders and shifting populations where travel has been blocked by terrorism.” Despite consistent work and effort to eradicate the disease from Nigeria, it was re-declared endemic in August, which leaves many concerned about it spilling over borders into neighboring countries. While Nigeria has always been a hotspot for polio, there has been increasing religious preaching that parents should not allow vaccination, specifically Muslim imams in Kano state in 2003, claiming that the vaccine had been contaminated to hurt Islamic children. Distrust compounds into lagging vaccination rates and during this time there was a spike in cases, which was coupled with terrorist activity by the Book Haram militia. “They cut off entire provinces, blocking the access needed by teams vaccinating children and epidemiologists counting cases. When the Nigerian military forced the militia out of parts of Borno state, in Nigeria’s northeast corner, the polio campaign discovered that wild polio virus had been circulating there for years.” The area around Lake Chad – Chad, Cameroon, and Niger – all pose problematic for vaccination efforts as the WHO calls the situation a “complex emergency” with more than 150,000 people fleeing across national borders. Despite these challenges, the governments of Nigeria and five nearby countries have initiated a massive emergency vaccination campaign that covers more than five million children per round, of which they’ll perform six rounds. “That may be an even more difficult task than in Afghanistan or Pakistan. In those countries, most of the areas where polio survives are remote, with little traffic in or out. Nigeria, on the other hand, is the most populous country in Africa, and a crossroads for the rest of the continent. There is no quick fix that can make the risk of onward spread go away; it requires yet more of the hard, grinding, repetitive work that eradication campaigners have been doing for almost 30 years.”

Zika Virus – What’s the Latest?
Brits are being warned not to travel to Florida after two British journalists contracted Zika during their travel to the state. The Florida state health department has released their Zika data– there are four new travel associated cases and nine non-travel associated cases. Wellcome Trust medical research charity is warning that we should expect Zika to reach India and Africa. “I think we can anticipate global spread,” said Jeremy Farrar, speaking to the Guardian alongside Sue Desmond-Hellmann, the chief executive officer of the Bill and Melinda Gates Foundation. “Given the [Aedes aegypti] mosquito’s availability across the world, I think the spread will next be across Asia and I think we really have to be prepared for it spreading in Africa. I don’t see any reason why it wouldn’t.” The WHO has released their Zika Research Agenda here, with a goal of “supporting the generation of evidence needed to strengthen essential public health guidance and actions to prevent and limit the impact of Zika virus and its complications”. Scientists are still bewildered by Zika’s path through Latin America as cases continue to grow. The CDC has reported 4,091 cases of Zika in the U.S. as of October 26th.