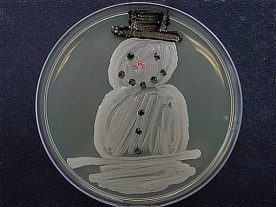 Happy Holidays from your friends at the Pandora Report and GMU Biodefense! If you’re starting a New Year’s resolutions list for things to improve, it sounds like you’ve got company – the WHO is rethinking how it responds to outbreaks.

The Grim Forecast of Antimicrobial Resistance
In the wake of the growing threat of antimicrobial resistance, it seems that the worried voices are getting louder but the barriers are growing higher. The return to colistin use points to a growing desperation as physicians are forced to use antibiotics that were previously avoided due to such harsh side effects. Many hospitals have shared their tales of MDRO outbreaks – some stopping as mysteriously as they began, while others have clear culprits. Some hospitals have even begun initiating isolation for any patient who was hospitalized abroad within the last couple of years. It’s also becoming increasingly common for hospitals to pre-emptively test patients via MDRO screening to more rapidly isolate them. The concern is also that few truly new antibiotics have been developed in recent years. “Thirty-seven antibiotics are currently undergoing clinical trials, according to the Pew Charitable Trusts, which keeps track of the U.S. pipeline. Most, however, are based on existing drugs. While these derivatives are cheaper and easier to develop than new classes of drugs, bacteria have a head start in developing resistance to them.Further, most drugs in the pipeline target so-called Gram-positive bacteria, a group that includes the well-known superbug methicillin-resistant Staphylococcus aureus (MRSA). But recently, the main emerging threats have come from the group known as Gram negatives, which are harder to treat because they are encased in tough membranes that repel many drugs.” Many are pointing to a tipping point in 2017 – antibiotics will be consumed by farm animals more than humans worldwide. The UN General Assembly is calling for countries to start getting smart in terms of antibiotic usage but hasn’t set specific goals. Sadly, it seems that there aren’t many more ways this impending reality can be shared – data, shocking titles, future predictions, etc. Check out this factsheet on the use of antibiotics in agriculture and why it impacts resistance. The report has some great suggestions for future work, like refining antibiotic labels and working to collect and report better data. Here’s a spot of good news in this dismal truth – the FDA has just cleared a new one-hour MRSA test to help rapidly identify the lead bug in healthcare-associated infections.

Homeland Biodefense: Science & Technology Capability Review
Just in time for the holidays, it’s like the National Science and Technology Council just knew what biodefense geeks wanted. This report is the product of a comprehensive review of U.S biodefense capabilities, which aided in the prioritization of S&T issues to better strengthen response. The end result is a product of two phases- stage 1: “The goal of this activity was to identify S&T needs articulated by Federal subject matter experts including both science program managers and agency officials in charge of operational programs, to elicit feedback on where additional S&T investments could address operational needs.” Stage 2: “The goal of this activity was to provide coordinated interagency feedback on which needs represent the highest priority to the interagency working group, and to identify which Department or Agency should recommend or coordinate on actions to respond to each of those priority needs.” Scenarios were limited to a handful of events like aerosolized anthrax, avian influenza outbreak (possibly deliberate), food-borne attacks, etc. Perhaps some of the most notable findings were the need to improve abilities to systematically assess how much risk has been mitigated by biodefense investments, understand the impact of bioattacks on companion animals and wildlife, several deficiencies in regards to technical staff and lab infrastructure, etc.

Greek Food Terrorism Threats
Member of an eco-anarchy group in Greece, FAI/IRF, are announcing their threats for food terrorism over the holiday. The time frame for attacks is December 22nd – January 5th, 2017 and the group has said that their focus is on causing economic disruption, not poisoning people. FAI/IRF has shown their process for poisoning various food and beverage items as their targets include Coca-Cola, Nestle, Unilever, and Delta. Many of these companies have chosen to withdraw specific products from an area in Greece. The group has shown how they can poison foods/beverages with chlorine and hydrochloric acid while leaving the packaging in place. “The four companies that withdrew products were named in the FAI/IRF statements. The eco-anarchists claim to be opposed to both capitalism and Marxism. They contend in their statement that Coke profits from ‘forced labor’ in China and Nestle is ‘held responsible’ for the death of 1.5 million children in the third world. No substantiation was provided for either claim.”

The Commandant’s Reading List
In the latest Army Chemical Review (Professional Bulletin of the Chemical Corps) you can find the Commandant’s Reading Program, compiled by Lieutenant Colonel James P. Harrell, which contains a great assortment of books to add to your reading list (or last minute shopping list!). From Laurie Garrett’s The Coming Plague to Michael Oldstone’s Viruses, Plagues, & History, you can pick up some top CBW books. GMU Biodefense’s very own director and professor, Gregory Koblentz, had his book, Living Weapons: Biological Warfare and International Security, make this list, so make sure not to miss it!

Test Driving Genetically Engineered Mosquitoes
Take a tour through the world of genetically engineered mosquitoes at Imperial College London with genetic engineer, Andrew Hammond. What makes these particular mosquitoes especially unique is the use of gene drive to ensure virtually all offspring acquire the desired effects. “Hammond’s team is genetically engineering the Anopheles gambiae mosquito, which is the primary species that spreads the malaria parasite. Nearly all of the offspring of the modified mosquitoes inherit mutations that knock out the genes females need to make eggs. ‘If we can sterilize the females,’ he says, we ‘can actually eliminate a whole mosquito population without affecting those mosquitoes that don’t have the capability to transmit malaria’.” Hammond gives a great tour of the process for creating gene-drive mosquitoes while discussing the dangers of gene drive and genetic engineering. While there is a wealth of opportunity to do good with tools like CRISPR, there’s also the concern that there could be unintended consequences or events we can’t even imagine. To combat the potential risks, there are also research teams working to keep CRISPR in check.  “A team of scientists that previously identified genes within bacteriophage genomes that code for anti-CRISPR proteins has now discovered phages that harbor an antidote to the Cas9 enzyme that is a key component of the predominant CRISPR system that is today used as a gene-editing tool. The team, led by the University of Toronto’s Alan Davidson, described three bacteriophage-encoded, anti–Cas9 genes and showed that the corresponding proteins are able to block the activity of CRISPR-Cas9—derived from bacterial type II CRISPR-Cas systems—in human cells.”

FEMA’s Ricin Mishap
Going through the Center for Domestic Preparedness (CDP) training a few years back was a fascinating experience – how many times do you get to train with ricin or anthrax and then move into a pandemic preparedness exercise? For this biodefense student, that’s what I call a good time! Sadly, CDP just announced their entry into the club of biosafety failures. The facility is blaming an outside lab for shipping the wrong form of ricin powder…since 2011. “The training center says it submitted order forms asking for a type of ricin extract that is unlikely to cause serious harm. But officials from Toxin Technology, the Florida company that sent nine shipments to the center since 2011, told USA TODAY that its ricin products were all accurately labeled as ‘RCA60’ – a scientific name for the whole ricin toxin, which can be deadly. It’s unclear why training center staff didn’t recognize for years that they were working with a far more dangerous substance.” The news broke late last week and on Saturday, I received an email from CDP regarding the suspension of those classes and some comments on the incident. Here are some of the highlights:
-In November 2016, while making a purchase of ricin A-chain for training, CDP staff recognized an ongoing discrepancy in the documentation related to the type of ricin being provided. The vendor has now said the more toxic holotoxin version of the materials was provided since 2011. It was previously believed that all remaining ricin on campus had been destroyed. This week, it became known that, while CDP had indeed destroyed all of the ricin in question, additional ricin training material, a solution marked A-chain remains securely stored on the premises. This material was not received from the vendor in question and we are working with the appropriate authorities to safely dispose of the additional ricin material.
-As an example, the protective gear you wore exceeded what would be required for working with ricin slurry.  Students who trained with the agent were in full Level C personal protective equipment at all times when training.  We have no indication that students were exposed directly to the holotoxin or harmed by it.

Zika Outbreak Updates
Not surprisingly, researchers are pointing to the impacts of climate change on infectious diseases. Recently, many have noted the role of climate change and El Niño on laying the groundwork for Zika to spread so quickly and proficiently throughout South America. A new study describes interworking of the virus and the mechanisms it utilizes for damage in pregnant women and developing babies. The CDC has reported 4,756 cases in the U.S. as of December 21st.