WHO Leadership Prioritization
There are six key positions the new WHO director general should prioritize, according to Mukesh Kapila of The Atlantic. The newly elected, first ever African director general has a lot on his plate and his future efforts will surely be evaluated against the mistakes and successes of his predecessors. Dr. Tedros comes into the position with somewhat of a dark cloud following him – during the election an advisor to his opponent made public comments accusing  Tedros of intentionally covering up outbreaks within his home country of Ethiopia. Kapila’s proposed to-do list for Tedros includes six main components. Firstly, promote home-grown national solutions, which focuses on sustainability and developing models that fit them and not a standardized solution for all countries. Secondly, remember that the WHO does not have a monopoly on health wisdom. “Delivering change will require a revisioning of WHO’s long-presumed position as the centre of the global health ecosystem. Today we have many well-resourced international bodies and national institutions with highly-qualified experts. Thus, WHO does not have a monopoly on health wisdom and its norm-setting and convening authority is questioned. It’s high time that the humbleness that has endeared Tedros to many people rubs off on the organisation.” Third, hire diverse talent that helps restore trust throughout member states instead of pulling from just a select few. Fourth, don’t get bogged down in international reform. “Tedros can’t afford to waste his five-year tenure on simply rearranging institutional furniture. All his recent predecessors as director general have huffed and puffed but ultimately failed to reform WHO. An effective and efficient organisation is just a means towards an end. So, Tedros only has to do enough to make WHO fit for the purpose of delivering his vision.” Fifth, look beyond traditional thought leaders – tackle the exhaustive list of issues by thinking outside the box and approach such challenges with a different vantage point. Lastly, accept that the WHO has to live within its means. “WHO is broke with budget gaps in priority areas and excessive reliance on ad hoc voluntary funding. But he should resist setting out with a begging bowl and instead reform the budgetary architecture and agree a new compact for consistent and predictable funding.” WHO headquarters alone are in an expensive location, but overall Tedros must work to truly budget accordingly while re-establishing the WHO as a leader in global health with a reputation that encourages participation and support.

Public Transit Emergency Preparedness Against Ebola and Other Diseases
Globalization and innovative developments in transit allows us to travel around the world within hours rather than days or months. Unfortunately, we’re not the only ones that travel with such new capabilities. Outbreaks like SARS, MERS, and even Ebola have all bubbled outside of their origins thanks to the ability of global travel. What can be done though? “The Transportation Research Board’s Transit Cooperative Research Program (TCRP) Legal Research Digest 50: Public Transit Emergency Preparedness Against Ebola and Other Infectious Diseases considers federal and state laws and available court decisions affecting transit agencies’ responses to infectious disease outbreaks, including potential cohesiveness among transit agencies’ procedures and federal and state guidance”. This finding highlights major topic areas like closures of major traffic generators, quarantine and isolation, employee protocols, etc. Overall, the TCRP digest investigates the legal basis for closures or emergency regulations on transit agencies as a response mechanism to pandemics or outbreaks. One particularly interesting component to the report is section VIII, which discusses infection control and disinfection measures related to transit. 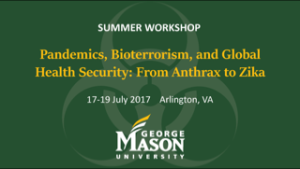 Summer Workshop – Don’t Miss Out!
With just over a week before our Summer Workshop on Pandemics, Bioterrorism, and Global Health Security begins, don’t miss out on the last remaining spots! We’ll have instructors from all over the realm of biodefense discussing a range of topics as diverse as the threats themselves. Biotechnology and medical countermeasures? We’ve got it! Dual-use research and biosecurity? Got it. Don’t worry – we’ve got all the topics covered. You won’t want to miss this three-day workshop filled with wonderful topics and some of the top names in the biodefense field.

How Bill Gates Got Bioweapons Wrong
Following Bill Gates’s comments on bioterrorism, Filippa Lentzos points out that while his intentions were good, his comments about a terrorist wiping out 30 million people with a weaponized disease are wrong, especially as they draw such attention to amateurs as terrorists. Lentzos specifically highlights the tacit knowledge that would be needed for such an act and that frankly, it’s a stretch for terrorists to take advantage of biotech advances. “Available evidence shows that few terrorists have ever even contemplated using biological agents, and the extremely small number of bioterrorism incidents in the historical record shows that biological agents are difficult to use as weapons. The skills required to undertake even the most basic of bioterrorism attacks are more demanding than often assumed. These technical barriers are likely to persist in the near- and medium-term future.” Moreover, Lentzos points out that by making such comments, Gates distracts from those who are more concerning in terms of bioweapons – state-sponsored groups and national militaries. It’s within these groups that the capacity to develop and deploy weapons lies, not within the small DIY garage bioterrorist. “Another factor significantly limiting the use of biological weapons is their lack of perceived military utility. In the near-to-medium term, however, advances in science and technology may enable the development of more capable and more accessible biological weapons. These weapons might allow attacks to be targeted more precisely. Attribution would become more difficult. These technical developments—paired with changes in the social context around biological weapons—may lower barriers to the development and use of biological weapons.” To defend against these degrading barriers, Lentzos urges several things – modernizing the Biological Weapons Convention, use of a collective and convincing response for any breaches in norms against bioweapons or actual use of one, and development of national biodefense capacities. Lentzos leaves the reader with a final plea – within these biodefense programs, ensure biosafety and biosecurity, implement the BWC, declare the program to ensure confidence-building measures are submitted, and regularly review your program to ensure compliance with the BWC. In the end, it’s the state-sponsored or military bioattacks we should worry about rather than drawing attention to the potential for bioterrorists.

Bio: Separating Fact From Fiction
GMU biodefense PhD alum Daniel M. Gerstein evaluates the good, bad, and ugly of DIY biotechnology. Drawing on a range of events and even films, Gerstein first describes what exactly DIY biotechnology is as there is frequently confusion. He highlights the freedom that DIY biologists have in terms of their projects, especially since they aren’t driven by grants or deadlines that companies or universities place on such projects. The promises and perils of DIY bio has been met with an array of critics and supporters – some say that this freedom is how scientific discovery occurs, while others point to the lack of oversight and that people without fundamental understanding of scientific ethics may abuse such technology. “The DIY spirit is embedded in humankind’s quest for discovery and knowledge. As DIY bio continues to evolve, two ‘courses of action’ are available. The first would be to place harsh limitations on such activity, but that would ultimately be counterproductive and likely fail. The second would be to embrace DIY, understand its risks and limitations and work collaboratively with the community to shape activities to ensure the safety of those conducting the experiments and the general population. If and when boundaries are breached, swift and appropriate actions must be taken to remediate the actions and even discipline the offenders. Finally, important outreach will be important to ensure law enforcement and society at large understands DIY bio. The image of DIY bio in the movie Quarantined must be replaced with a more nuanced understanding of the benefits and risks of the use of biotechnology.” 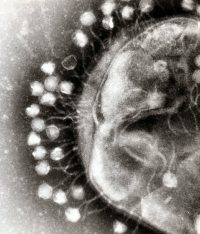 Scientists Utilize Old School Approach Against Resistant Bacteria
In the fight against resistant bacteria, an old strategy may be worth a try – bacteriophages. Using viruses to kill bacteria is an old strategy but it may be effective for our new problem – resistance. While the strategy was first discovered in the early 20th century, isolating and truly utilizing bacteriophages was challenging. Fortunately, now we have technology and advances in medicine on our side. “As a result, scientists are taking a fresh look at what is called phage therapy. ‘They are starting to dust off their old laboratory notes and re-explore the use of bacteriophages as a ‘new’ way to treat serious, life-threatening infections,’ says William Schaffner, medical director of the National Foundation for Infectious Diseases. Increasingly, specialists in infectious diseases believe phage therapy holds promise against bacterial diseases, especially in cases where antibiotics have failed. In 2016, the approach saved a San Diego man who otherwise would have died. Several similar successes have been reported since then.” While phage therapy isn’t yet FDA-licensed for humans, it can be used in life-threatening situations (like the San Diego case), but researchers are working to combat the challenges with getting it approved. Despite its use in other countries as a means of treatment, there is limited phage data within the U.S. There’s a long road ahead for harnessing the power of phage therapy, but it just may be one of the greatest tools in the fight against the resistant germ.

Stories You May have Missed: