Happy Friday! Are you a fan of antibiotics and their ability to fight off microbial threats? So are we, which makes the recent WHO report that much scarier. Since this latest report points to the dire situation of antibiotic development, we’re super-sizing the focus on the antimicrobial resistance and super bugs this week.

Fifteen Years of Public Health Emergency Preparedness  & AJPH Special Edition
Make sure not to miss the special edition of the American Journal of Public Health (AJPH), focusing on public health emergency preparedness. Within this edition there are great articles on science in emergency response at the CDC, children’s health in emergency preparedness, evolution of the field, funding, etc. One of the best parts was the Editor’s Choice – From Anthrax to Zika: Fifteen Years of Public Health Emergency Preparedness. This article discusses public health threats, regardless of origin, and how they can lead to national emergencies. “Our current frame of reference is shaped by the events of September 11, 2001. In response to the terrorist attack, the US Congress set up appropriations to support state, local, tribal, and territorial public health departments nationwide; these funds are administered through a cooperative agreement from the Centers for Disease Control and Prevention (CDC) to fortify national security. The Public Health Emergency Preparedness (PHEP) cooperative agreement helps health departments strengthen their abilities to effectively respond to a range of public health threats, including infectious diseases; natural disasters; and biological, chemical, nuclear, and radiological events. As a result, the CDC and the PHEP community have played critical roles over the past 15 years in preventing, responding to, and rapidly recovering from public health threats ranging from anthrax (2001) to Zika (ongoing currently as of publication). Responses to these public health threats highlight the need for preparedness efforts to protect people and support communities when disaster strikes.” The authors discuss the impact of the 2001 Amerithrax attacks on public health countermeasures and response, and then the 2009 pandemic of H1N1 during the school year. They also touch on food safety and biosurveillance, which caught the 2015 E. coli and meningitis B outbreaks in Oregon, not to mention the recent impact of Zika and Ebola. “These are just a few examples of public health preparedness capabilities that the CDC identified in its 2011 guidance document issued to aid in the development of successful public health preparedness programs. The articles in this issue of AJPH provide detailed accounts of preparedness in action, showcasing competencies in biosurveillance, incident management, community resilience, information management, countermeasures and mitigation, and surge management. These articles demonstrate how and why public health agencies, health care systems, and communities play a vital role in protecting and securing the nation’s public health.” 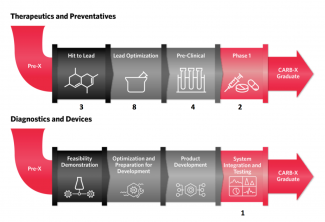 CARB-X: Fighting AMR through Public-Private Partnerships
GMU biodefense MS alum Nick Guerin is taking us through the journey of fighting resistant organisms and the importance of antimicrobial stewardship partnerships. Guerin looks to the new CARB-X strategy at curbing the impending threat of antimicrobial resistance (AMR). “One possible protection against AMR is the development of new medical countermeasures (MCMs). The strategies to find the best MCMs crisscross multiple organizations and functions, namely through either public or private initiatives. However, such divided efforts create limitations that might best be overcome through comprehensive public-private collaborative efforts.” Not only does Guerin highlight the details of CARB-X and other partnerships, but he also addresses past approaches and failures in fighting AMR. “AMR’s threat demands expedient solutions; the decade’s long wait for new antibiotics cannot continue. AMR poses one of the most difficult development requirements for these new MCMs, one that public and private sectors haven’t overcome on their own.”

Global Health 2030 Symposium
The second annual Global Health 2030 Symposium will be held on October 4th at the United Institute of Peace in Washington, D.C. “Experts, academics, and practitioners will be exploring the Science of Health: Bridging Epidemics and Technology. Join us as we convene the community to prepare for the growing health challenges at home and abroad. Learn about the latest technology and global health innovations combating widespread epidemics and improving disaster response. The keynote address, ‘The Persistence of Epidemics and Our Response’ will be given by Dr. Michael Cowan, Executive Director, Association of Military Surgeons of the United States.”

Space – The Next Microbial Frontier?
How do bacteria act in space? Sure, we know the microgravity can permanently alter bacteria and make them even better at reproducing, but we need to really understand why this happens and how it might impact our health during space exploration. “In an experiment planned by researchers at the University of Colorado at Boulder and carried out on the ISS, cultures of Escherichia coli bacteria were doused with the antibiotic gentamicin sulphate, which usually kills off E. coli quite easily. Out in space, it was a totally different story. ‘We knew bacteria behave differently in space and that it takes higher concentrations of antibiotics to kill them,’ says one of the researchers, Luis Zea. ‘What’s new is that we conducted a systematic analysis of the changing physical appearance of the bacteria during the experiments’.” Their experiment found that E. coli reacted with a 13-fold increase in cell numbers and reduced their cell volume by almost 75%. This reduction in size can make treatment with antimicrobials tricky as there is a smaller surface area for them to interact with. Researchers also found that the bacteria increased cell envelope thickness and outer membrane vesicles. “The bacteria threw up extra shields by thickening their cell walls and outer membranes, and growing in clumps so a shell of outer cells could protect the inner ones from getting exposed. ‘Both the increase in cell envelope thickness and in the outer membrane vesicles may be indicative of drug resistance mechanisms being activated in the spaceflight samples,’ says Zea. ‘And this experiment and others like it give us the opportunity to better understand how bacteria become resistant to antibiotics here on Earth’.” While more research is needed, perhaps this environment will be the new proving ground for novel antimicrobials and tougher processes. If nothing else, this just gives me a lot of appreciation for how tough space disinfection is.

How China’s AMR Outbreak Revealed the Changing Landscape of Infection Control                                       The news that a Chinese hospital lost five patients to a severe strain of drug-resistant Klebsiella pneumoniae left many concerned about the growing threat of antibiotic resistance. The strain of K. pneumoniae was not only highly resistant, but also hypervirulent and highly transmissible, which is just about everyone’s worst nightmare when it comes to antimicrobial resistance. GMU biodefense PhD student and infection preventionist Saskia Popescu takes a look at this outbreak and how it reveals the changing landscape of infection control. “The recent report from the Chinese ICU outbreak points to the increasing threat of microbial resistance and the desperate need to address prevention efforts in terms of both stewardship and infection control. As the landscape changes for both medical care and biothreats, it is important that infection prevention and control efforts be a part of this evolution. We must consider these practices and hospital programs when modernizing healthcare and public health. These infectious disease events can, and should, teach us about the diverse range of issues hospitals face and how we can better prevent the spread of infection through active, instead of passive, efforts. “

Cryptology History Symposium
GMU biodefense PhD alum Craig Wiener will be presenting his dissertation research at the October Center for Cryptology History Symposium. His research, “Penetrate, Exploit, Disrupt, Destroy: The Rise of Computer Network Operations as a Major Military Innovation”. Don’t miss out on this opportunity to listen to Craig discuss his research “determining the origins of computer network exploitation and computer network attacks in the U.S. intelligence community.”

Health Security Call for Papers – Extended Deadline
The call for papers on communication and health security deadline has been extended to December 31st, 2017. “A special feature in Health Security will be devoted to analysis of the current communication environment and efforts to effectively communicate during outbreaks of infectious diseases and other health threats. The journal seeks papers that address the wide range of policy, practice, and research issues relevant to communication in large-scale health events. The special Journal section devoted to communication and health security will be published in the March/April 2018 issue of Health Security. Scholarly and review articles, descriptions of practice, and opinion and commentary pieces are welcome. Manuscripts can be up to 5,000 words exclusive of the abstract, tables, figures, and references. Please consult the journal website for specific submission instructions.”