What could be spookier than a Friday, 13th, in October? Actually, a few things – antimicrobial resistance, biological weapons, plague in Madagascar….. 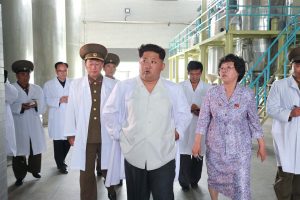 North Korea’s Biological Weapons Program – The Known and Unknown
The Harvard Kennedy School’s Belfer Center has just released a new report on North Korea’s biological weapons program. There’s been significant attention recently on their nuclear program however, there is still speculation regarding the real capacity for a biological weapons program. Bioweapon programs are always challenging to determine from the outside – so much of the equipment has dual-use capacity that makes external monitoring inaccurate at best. The new report utilizes publicly available information and interviews with experts to investigate the knowns and unknowns of North Korea’s BW program. Researchers “examine where policy on North Korea’s BW stands. We focus our analysis on the policies of South Korea and the United States, rather than at an international level, as North Korea has had limited participation in the Biological Weapons Convention (BWC).” The report also provides recommendations on how to improve assessment and surveillance efforts, not to mention current policies regarding North Korea’s BW program. Within this report, you’ll also find sections regarding means of delivery, strategic and tactical usage, gaps in current policies, how to improve nonproliferation policy, etc. 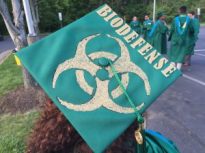 GMU Biodefense MS Open House – October 19th
Next week, GMU’s Schar School will be hosting a Masters Open house for prospective students, which means you get another chance to learn about our engaging and exciting Biodefense MS programs! You’ll be able to speak to faculty, learn about admissions, and how you can study biodefense on campus or remotely, at 6:30pm on Thursday, October 19th at our Arlington campus.

Biodefense: Federal Efforts to Develop Biological Threat Awareness
The most recent report from the U.S. Government Accountability Office (GAO) is drawing attention to biothreat awareness and how key agencies, like the DHS, DoD, USDA, HHS, and EPA, work to develop such awareness, regardless of the origin of the threat. The report highlighted three categories of efforts – intelligence gathering, scientific research, and analysis activities. “Federal agencies with key roles in biodefense share biological threat information through many different mechanisms designed to facilitate collaboration among government partners, including working groups and interagency agreements. For example, agency officials reported using collaborative mechanisms to coordinate activities and avoid duplication and overlap. However, as GAO and others have noted, opportunities exist to better leverage shared resources and inform budgetary tradeoffs. Recent legislation requires key biodefense agencies to create a national biodefense strategy that has the potential to help address these issues, by, among other things, supporting shared threat awareness. Until the strategy is developed, the extent to which it will meet this need is unknown.” Due to the variety of sources that biological threats can originate from, this report was established to review how federal agencies not only develop, but also share threat information and how this impacts future biodefense efforts. GAO utilized policies, directives, and strategies that were all related to biodefense to appropriately assess processes and the main agencies that would have critical roles within biodefense efforts.

NASA Backs Research on Evolution of Viruses in Extreme Environments Understanding how viruses adapt and infect hosts is a critical component to predicting movement and hopefully, prevention. NASA has recently funded Portland State biologist Ken Stedman to study viral evolution and how hybrid viruses work. “The study stems from a bizarre virus Stedman discovered in a hot spring at Lassen Volcanic National Park five years ago. The virus’s genetic code is derived from both DNA and its evolutionary predecessor, RNA. The vast majority of life on Earth switched its genetic code from RNA to DNA about four billion years ago, so the fact that this virus has both is highly unusual, according to Stedman.” The NASA grant will allow Stedman and his research team to study hybrid viruses, who they infect, and how they were able to adapt to such extreme environments.

Pandora Report Twitter
Feeling like you need a little extra biodefense information and humor in your life outside of our weekly reports? Check out our Twitter account (@PandoraReport) for a pretty constant stream of not only informative headlines, but also a taste of the hysterical biodefense community. The hidden world of biosecurity/biodefense twitter nerdom is pretty outstanding and probably the best thing on twitter (well, we may be a bit biased, but find out for yourself!).

Seychelles Identifies A Case of Plague
As Madagascar is struggling against a severe outbreak of plague, a nearby chain of islands, Seychelles, has just identified its first imported case. Seychelles is currently working to prophylactically treat fifteen people who were in close contact with the 34-year-old man who fell ill after returning from Madagascar. This is the first case that has spread beyond Madagascar, so officials are working diligently to avoid secondary cases. The WHO is currently sending 1.2 million antibiotics to Madagascar to fight the plague outbreak that is rapidly spreading, especially since many of the cases are pneumonic. Currently, there have been 50 deaths and 500 cases in Madagascar since the outbreak began in August.

Backing the Global Health Security Agenda
After months of speculation and concern regarding the Trump administration’s support for the future of the GHSA, Secretary of State Rex Tillerson brought forth a wave of relief. In a recent keynote speech, Tillerson “voiced support for US collaboration on global infectious disease issues, including ongoing efforts to battle threats such as HIV and malaria. He also signaled US support for extending to 2024 the Global Health Security Agenda (GHSA), a partnership of 50 nations, international organizations, and nongovernmental organizations geared toward building countries’ capacity to prevent and respond to infectious disease threats.” While discussing the importance of the President’s Emergency Plan for AIDS Relief (PEPFAR), he also highlighted that HIV/AIDS is not the only biological threat that needs addressing, commenting that the GHSA was a useful framework. Tillerson noted that “While we’ve made tremendous progress since GHSA was launched in 2014, considerable work remains. That is why the United States advocates extending the Global Health Security Agenda until the year 2024. the United States commitment to working in multi-sectoral partnerships to counter infectious diseases through the Global Health Security Agenda will remain constant,”.

Strategies Against Antimicrobial Resistance
We’ve been waging war on antimicrobial resistance (AMR) for decades now, but the truth is that future strategies may require thinking outside the box. Here are some of the potential avenues for helping to stop the global burden of microbial resistance – utilizing the human micro biome to help develop new antimicrobials and deploying tiny semiconductors – “A minuscule amount of drug with some light can treat some of the worst superbug infections we tested in clinical strains acquired from a Colorado hospital,” Nagpal says. “Of course, more work and extensive studies in preclinical and clinical trials need to be done before we can administer these quantum dots to patients. However, this initial study shows a lot of promising features.” Efforts also includes infection killing polymers, changing the culture of research to move away from siloing and towards efforts across multiple channels, making existing antibiotics stronger, etc. In fact, if you want to see how AMR spreads around the world, check out this graphic from Pew Charitable Trusts.