Happy Friday fellow biodefense friends! Curious about human migrant history? Ancient DNA is giving us some insight into our ancestors movements and habits. FluMist also just got the green light for use next flu season. 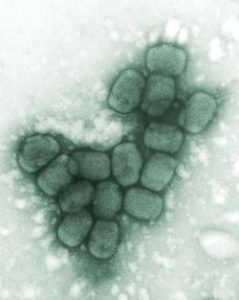 Crossing the Rubicon: Horsepox Synthesis
Julius Caesar is said to have stated “alea iacta est” (the die is cast) as he led his army across the Rubicon river, triggering a point of no return in Roman history. In many ways, the horsepox synthesis is considered a new Rubicon for synthetic biology and the life sciences. While the lead researcher of the project and the private company backing it cite desires to advance progress in the pursuit of a new smallpox vaccine and identifying gaps (“Our hope is that this work will promote new and informed public health discussions relating to synthetic biology, stimulate new evaluation of [horsepox]-based vaccines, and advance the capacity to rapidly produce next-generation vaccines and poxvirus-based therapeutics.“), many are asking if they put profits ahead of public safety. The research team claimed they chose to synthesize the virus because they could obtain it no other way, but a recent article by NPR is challenging this. “There was another possibility, NPR has learned. Evans could have done research on a specimen of horsepox collected from the wild, but he didn’t pursue that alternative. He says using the natural virus might have prevented the pharmaceutical company he is working with from commercializing horsepox as a new vaccine for smallpox. But the head of the company told NPR that he had not been aware that this stored sample of horsepox was potentially available — and would not have wanted to synthesize the virus from scratch if he had known.” So now that we’ve ventured across the river, it seems that we may be learning more about dual-use research in general. Gregory Lewis notes that “Beyond the immediate issue of whether the horsepox work should have been performed (or published), the horsepox synthesis story highlights a more general challenge facing dual-use research in biotechnology: the unilateralist’s curse.” Lewis describes the unilateralist’s curse – “imagine that 100 scientists are individually deciding whether it would be a good idea to synthesize horsepox. All of them act impartially and in good faith: They would only conduct this work if they really thought it was on balance good for humankind. Each of them independently weighs up the risks and benefits of synthesizing horsepox, decides whether it is wise to do so, and acts accordingly. The situation arises from the fact that, if synthesis of horsepox is not to occur, all 100 scientists must independently decide not to pursue it; while if any of the scientists judges the benefits to outweigh the risks, he or she acts unilaterally to synthesize horsepox. Thus there is an ‘action bias’: Horsepox synthesis is more likely to occur when scientists act independently than when they agree to a decision as a group.” Has the quest for the “first strike” in scientific discovery outweighed the risks of dual-use research? The horsepox synthesis has cast a bright light upon the challenges of DURC oversight and the gaps we are struggling to even acknowledge.

Examining Challenges & Possible Strategies to Strengthen U.S. Health Security
The National Academies of Science have released the latest proceedings of a workshop regarding the progress that has been made in the last 15 years towards improving health security, but also the gaps that exist. “On March 8–9, 2017, the National Academies of Sciences, Engineering, and Medicine’s Forum on Medical and Public Health Preparedness for Disasters and Emergencies hosted a two-day public workshop to acknowledge these persistent issues; to evaluate past, and perhaps inadequate, approaches to addressing them; and to discuss intentional and innovative new solutions. This publication summarizes the presentations and discussions from the workshop.” The report includes proposed priorities and challenges, underlying issues in health security, and potential strategies for strengthening American health security. Such strategies include developing a shared agenda, promoting a culture of learning and sharing, building the evidence base for policy and operations, etc. “Levy called for a paradigm shift toward conceptualizing health care, public health, the business community, and other sectors as parts of a whole that need to be integrated to provide a better environment for the community at large and better care for the community on a day-to-day basis.” Optimizing the exchange of information was also discussed, as was ensuring the interoperability of data across multiple systems. Participants also examined the financial components of health security and making the business case for investment.

Biohacker’s Remorse
Last year saw contaminated CRISPR DIY kits hit Europe, but it did little to calm the biohacking stunts of Odin CEO Josiah Zayner. In a recent article, Zayner pointed to the moment another biotech CEO dropped trouser and injected himself with an untested herpes treatment mid-conference, as a wakeup call. “’Honestly, I kind of blame myself,’ Zayner told me recently. He’s been in a soul-searching mood; he recently had a kid and the backlash to the CRISPR stunt in October had been getting to him. ‘There’s no doubt in my mind that somebody is going to end up hurt eventually,’ he said.” Zayner says his past actions were efforts to provoke people in the industry who are involved in regulation and ethics in regards to roadblocks for CRISPR and DIY kits, noting that it’s a moral and ethical dilemma. Unfortunately, his sentiments aren’t doing much for those who feel his actions were attention-seeking stunts and he has yet to prove his concern for the DIY CRISPR risks. In case anyone was wondering if Zayner is still up to his old tricks, he also provided his latest video (Gut Hack) in which he attempts to give himself a fecal transplant. While this sounds gross (and it is), what’s more concerning is that an unlicensed and untrained individual is attempting to perform a very specific task that requires a stringent infection control guidelines and procedures. For those of us who have spent years working to perfect policies and practices so this medical procedure can be used to treat patients suffering from Clostridium difficile, this is not something to be taken lightly and isn’t exactly a good indicator that Zayner has learned from his mishaps.

When Poor Infection Control Results In A Lawsuit
Who is responsible when hospitals decide to neglect infection prevention and control? A critical component to patient safety during medical care, infection control failures can result in the spread of infection – like the transmission of Ebola to healthcare workers. A recent court decision may be setting precedent for infection control responsibility during outbreaks. A Seoul court recently ordered the South Korean government to pay compensation to a patient who acquired MERS-CoV after the government failed to implement infection control. The patient “became infected while being admitted at a hospital in Daejeon where patient 16 was staying. Patient 16 moved there not knowing that had been infected by a different person, identified as patient 1 who infected 28 others, at Pyeongtaek St. Mary’s Hospital in Gyeonggi Province. Patient 1, who had been admitted to St. Mary’s more than two weeks after returning from a trip to Bahrain, a Middle Eastern country, May 4, reported suspected symptoms of MERS with health authorities the morning of May 18. However, the Korea Centers for Disease and Prevention (KCDC) dismissed it, saying the country had no reports of a MERS outbreak.” The court notes that if quarantine would have been implemented appropriately, it could have stopped the spread.

Can Nanoparticles Help Us Battle Antimicrobial Resistance?
As news emerges of an extensively drug-resistant (XDR) typhoid strain in Pakistan, it’s hard to imagine winning the battle of the resistant bug. Can nanoparticles tackle AMR? A research team led by Andrea O’Connor at the University of Melbourne is taking on antimicrobial resistance through nanoparticles and collaboration with a nearby hospital. “Together, the team found that selenium (a mineral that humans require in their diets to boost immunity and aid metabolism) in the form of nanoparticles can stop the growth of bacteria such as ‘Golden Staph’ (Staphylococcus aureus). Their findings are published in the Journal of Colloid and Interface Science. They think the nanoparticles do this by disrupting the membrane around the bacteria. ‘One of the ways that these nanoparticles can attack bacteria is by disrupting that membrane so they make the bacteria leaky, and then things can pass in and out of the bacteria in a way they normally wouldn’t’.” The team hopes that selenium nanoparticles have potential applications for when antibiotic efficiency dwindles, especially in terms of chronic wounds. Their nanoparticles have been tested against nine different kinds of bacteria and have found success against all of them.

Tales From A Virus Hunter
With CDC and global health security funding in a dire situation, the days of virus hunters trekking through jungles and providing boots-on-the-ground support for outbreaks may be in jeopardy. Dr C.J. Peters is one of the old school virus hunters who tackled Rift Valley Fever and Bolivian hemorrhagic fever in their early days. “Peters was a virus hunter. That often meant spending time in the field, mostly in Latin America but also in Africa, where the work was interesting and the bosses far away. ‘If you’re in the shadow of the flagpole from headquarters, you’re in trouble,’ he explained. ‘Because there will be somebody poking into everything you’re doing.’ Virus hunting today is not what it used to be. There is still adventure to be had, with bold scientists seeking to uncover the mysteries of the unseen world and ultimately benefit human health. But things have also changed.”