Ebola Outbreak Update
As the DRC continues work on containing an outbreak of Ebola, the question of response measures and vaccine deployment has come up, especially in light of the recent confirmation of a third case in Wangata, a different health zone. The WHO is calling the confirmation of a patient in a metropolitan area, a “game changer” and has initiated emergency meetings. The recent outbreak data now reports a total of 44 cases, 3 of which are confirmed, 20 probable, and 21 suspected. “‘This is not a health issue alone but a crisis that has negative impact on the socio-economic and political situation of the country and the region at large,’ said Lazare Sebitereko Rukundwa. Rukundwa, is the founder of the Eben-Ezer University of Minembwe in Congo, a Hubert Humphrey Fellow and a visiting scholar at George Mason University’s Schar School of Policy and Government”. In response to these cases, the vaccine (VSV-EBOV) has been deployed to the DRC as of May 16th. 4,000 units of it will be used to help stop the outbreak. “DRC Health Minister Oly Ilunga, MD also tweeted that the vaccines will be kept in special vaccine cold rooms in Kinshasa until they’re ready to be shipped to Mbandaka and Bikoro in the coming days. The Merck-produced unlicensed vaccine will be used to squelch an Ebola virus outbreak currently ongoing in three health zones of the DRC. Health officials will use a ring vaccination strategy, giving the vaccine to close contacts of patients first.”

GMU Workshop on Global Health Security – Don’t Miss Out!
Speaking of an Ebola vaccine…did you know that that Dr. Jens Kuhn (but seriously, he has an MD, PhD, PhD, and MS…so he’s as close to Bruce Banner as you’ll get) will be one of our speakers at the summer workshop? Dr. Kuhn is “a Lead Virologist in the Division of Clinical Research at the National Institutes of Health/National Institute of Allegery and Infectious Diseases Integrated Research Facility at Fort Detrick. Dr. Kuhn specializes in highly virulent viral human and animal pathogens”, specifically filoviruses. “Dr. Kuhn was the first western scientist with permission to work in a former Soviet biological warfare facility, SRCVB ‘Vektor’ in Siberia, Russia, within the US Department of Defense’s Cooperative Threat Reduction (CTR) Program” – which means he’s not only a wealth of knowledge, but has some pretty amazing stories to tell. Don’t miss the chance to learn from and chat with experts like Dr. Kuhn at our workshop in July!

Rhodesia’s Chem-Bio Warfare History
Have you gotten the dirt on the Rhodesian chemical and biological warfare program? If you’re looking for a summer read to boost your knowledge on it, GMU Biodefense PhD alum Glenn Cross’s new book, Dirty War: Rhodesia and Chemical Biological Warfare 1975-1980, is just for you. “Glenn Cross’s Dirty War: Rhodesia and Chemical Biological Warfare 1975–1980 is a welcome addition to the small, but growing scholarly literature on the history of chemical and biological warfare. In 1965, the minority white community in the British territory of Rhodesia (officially Southern Rhodesia) rejected demands that it transfer political power to the majority black population. By the mid-1970s, white Rhodesians found it increasingly difficult to counter the growing power of native African nationalists fighting the government. As with many insurgencies, the guerrillas lacked the resources to defeat government security forces in direct combat, but Rhodesian forces were stretched too thin to suppress the insurgents, especially once they had established base camps in neighboring countries. Amidst the conflict, Rhodesian military and intelligence services employed what would now be considered chemical and biological agents against the guerillas with unknown results.”

Dangers of the Rising DIY Biohacking
It’s likely not the first time you’ve heard about growing concerns regarding the rising popularity of do-it-yourself (DIY) gene editing. From the horsepox de novo synthesis to public stunts at conventions where biohackers injected themselves with HIV treatment, it’s becoming difficult to ignore why these actions are dangerous. The concern regarding the DIY gene editing community is that there are very little restrictions or regulations surrounding what they can or can’t do in a homemade lab. Sure, you can’t go buy Ebola online, but you can start stitching together horsepox, which is pretty scary. “The study’s publication in the journal PLOS One included an in-depth description of the methods used and — most alarming to Gregory D. Koblentz, the director of the biodefense graduate program at George Mason University — a series of new tips and tricks for bypassing roadblocks. ‘Sure, we’ve known this could be possible,’ Dr. Koblentz said. ‘We also knew North Korea could someday build a thermonuclear weapon, but we’re still horrified when they actually do it’.” NYTimes reporter Emily Baumgaertner points to several DIY biohackers who show an unsettling willingness to inject themselves with things they’ve made in their garage labs and that there are fundamentally large gaps in any kind of regulatory system. It’s important to remember that the stop-gap measures in place, imperfect as they are, are for academic researchers, and don’t pertain to those DIY’ers doing it at home. “Authorities in the United States have been hesitant to undertake actions that could squelch innovation or impinge on intellectual property. The laws that cover biotechnology have not been significantly updated in decades, forcing regulators to rely on outdated frameworks to govern new technologies. The cobbled-together regulatory system, with multiple agencies overseeing various types of research, has left gaps that will only widen as the technologies advance. Academic researchers undergo strict scrutiny when they seek federal funding for ‘dual-use research of concern’: experiments that, in theory, could be used for good or ill. But more than half of the nation’s scientific research and development is funded by nongovernmental sources.” As Baumgaertner notes, there are, of course, those in the DIY community who want to ensure biosecurity/biosafety and are just experimenting however, even biohacker celebrity Josiah Zayner has admitted an accident could happen, which would lead to negative outcomes. Whether you’re at home with your mail-order CRISPR kit or you’re working on policies to implement regulations on the biotech industry, we can all admit that the potential for nefarious actors or laboratory accidents is one that warrants safety measures and a hardcore cultural evaluation within the DIY biohacking community. Check out the latest BBC Radio5Live with Rhod Sharp, in which Dr. Koblentz discusses genome editing, biodefense, CRISPR, and biosecurity issues. 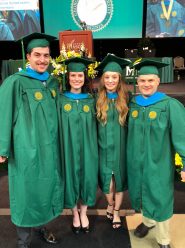 GMU Biodefense May Graduates and Awards
Congrats to our graduating GMU Bidoefense graduate students – we’re so proud of your hardwork and are excited to see what kind of amazing biodefense work you’ll do in the future! Congrats to two new Biodefense PhDs – Christopher K. Brown (Protecting Critical U.S. Workers from Occupational Exposure to Emerging Infectious Diseases: Toward A Universal Personal Protective Equipment Selection Matrix for Early Outbreak Response) and Jomana Musmar (The Path to PAHPRA: The Evolution of Pediatric Biodefense Legislation and Medical Countermeasure Development).

Broad-Spectrum Antibiotic Use in Sub-Saharan Africa: Risk Versus Reward
GMU Biodefense PhD student Saskia Popescu evaluated a recent study that analyzed childhood mortality following a widespread distribution of Azithromycin. Popescu not only looks to the experiment and long-term implications of prophylactic antibiotic use, but she also interviewed the PI of the study. “What this study ultimately shows is the considerable impact that mass distribution of a broad-spectrum antibiotic can have against childhood mortality in Sub-Saharan Africa. Following the publication of the study, however, many have flagged the moral dilemma that follows such results. Although the authors make note of the need for policy implementation for future practices and the potential for antimicrobial resistance, the study has nonetheless posed unique ethical questions. The benefits of mass distribution were supported by their research; however, what sort of long-term costs will such communities pay?”

Restoring Restraint: Enforcing Accountability for Users of Chemical Weapons – Event
Don’t miss out on this panel discussion hosted by the Center for Strategic & International Studies on June 19, 2018 from 9:30-11:30am. The keynote address will be given by H.E. Mr Ahmet Üzümcü, Director-General of the Organization for the Prohibition of Chemical Weapons. “In 2012 a 20-year moratorium on state employment of chemical weapons use was broken. Since then there have been more than 200 uses – against civilians, military targets, and political enemies. These attacks have broken norms against the use of weapons of mass destruction and create a gap in the nonproliferation fabric – despite the robust international architecture of laws, treaties, agreements, and norms designed to restrain the proliferation and use of these weapons. Accountability for these recent attacks has been limited or non-existent, which threatens the credibility of the nonproliferation regime and only encourages further use. Leaders must find the political and moral strength to use a full spectrum of tools to re-establish this system of restraint. This event will discuss ways in which the international community is working to rebuild the system of restraint against chemical weapons, and CSIS will also launch on a report on this topic.”

Clade X Exercise
If you missed out on the live-stream of this table-top exercise hosted by the Johns Hopkins Center for Health Security, don’t worry, you can check out the recording or  awesome live-stream Twitter activity by searching #CladeX. This was a wonderful exercise involving experts like Tara O’Toole, Julie Gerberding, Tom Daschle, etc. Responding to a biological incident, whether intentional, natural, or accidental, is challenging on a good day, but Clade X revealed very serious complications and gaps in our response measures. The Clade X exercise showed real-time decisions and questions that occurred during such an event. From quarantine to MCM and even healthcare worker refusals to work, there were several injects that made this an evolution in infectious disease response across multiple sectors and agencies. Even wild card moments occurred, like Arizona trying to close itself off, which is what made this exercise so engaging and rewarding.