This was a pretty busy week in the world of global health security, so we’ll start with something that’s supposed to be relaxing – a CW coloring book?  Look no further than the OPCW one that explains the importance of the OPCW and the elimination of chemical weapons, which is available here! We’re also watching the latest Amazon show, Jack Ryan, which might just have an infectious disease/biological weapon event in the plot…. 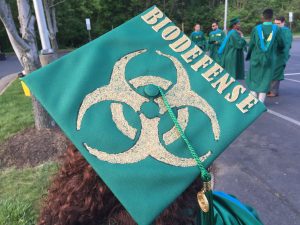 GMU Biodefense Master’s and PhD Open Houses
Don’t miss out on the chance to chat with faculty and students about the Schar Biodefense graduate programs. The GMU Schar PhD Open House is next Wednesday (9/12) at 7pm in Arlington and is a great way to learn about the doctoral process and why our PhD students are the ultimate biodefense nerds. The next Master’s Open House is on September 20th at 7pm and is a great way to learn about the in-person and online biodefense MS program. These are informative opportunities to learn about expanding your biodefense knowledge through graduate school and provides wonderful insight into why our program is the place for all things health security, from anthrax to Zika.

Suspects Identified in Salisbury Novichok Attack
This week, Prime Minister Theresa May reported that two members of the Russian military intelligence (GRU) were considered responsible for carrying out the attack in March. Sufficient evidence has been found to name the GRU members- Alexander Petrov and Russian Boshirov. May noted that “The GRU is a highly disciplined organization with a well-established chain of command, so this was not a rogue operation, it was almost certainly also approved outside the GRU at a senior level of the Russian state.” Following this announcement, Russia has been under heavy scrutiny from the international community. The United States, Canada, France, and Germany, joined in supporting the UK, urging “Russia to disclose in full its novichok programme. The case against Moscow laid out on Wednesday by the UK ‘further strengthens our intent to continue to disrupt together the hostile activities of foreign intelligence networks on our territories’, they said. One notable European country was missing from the declaration supporting the UK: Italy.” Foreign Policy‘s Mark Galeotti notes that “Although Russia’s various security services (and its other instruments of geopolitical struggle against the West) are granted considerable operational autonomy, major operations with potentially serious international implications need a green light from the Kremlin. Besides, there have been none of the usual indications—from mysterious resignations to well-sourced and damning leaks—which usually show that an individual or agency overstepped the mark. Whether Putin instigated the attack or, more likely, simply approved it, it was surely a state operation.”

Tackling Antimicrobial Resistance
This week two important articles were run on the battle of the resistant bug. The first was an article in the Lancet Planet Health, that evaluated the anthropological and socioeconomic factors that facilitate antimicrobial resistance. Pulling from several sources, researchers sought to understand the elements that contribute to global AMR – from prescribing habits to contributing factors like governance, education, GDP, healthcare-spending, community infrastructure, corruption, etc. “In the univariate analysis, GDP per capita, education, infrastructure, public health-care spending, and antibiotic consumption were all inversely correlated with the two antimicrobial resistance indices, whereas higher temperatures, poorer governance, and the ratio of private to public health expenditure were positively correlated. In the multivariable regression analysis (confined to the 73 countries for which antibiotic consumption data were available) considering the effect of changes in indices on E coli resistance (R2 0·54) and aggregate resistance (R2 0·75), better infrastructure (p=0·014 and p=0·0052) and better governance (p=0·025 and p<0·0001) were associated with lower antimicrobial resistance indices. Antibiotic consumption was not significantly associated with either antimicrobial resistance index in the multivariable analysis (p=0·64 and p=0·070).” Their findings underscore the obvious importance of antimicrobial stewardship, but ultimately the socioeconomic and cultural factors that encourage the transmission of these resistant infections. Better regulation in the private healthcare sector, improving sanitation, increasing access to clean water, etc., are all things that impact antimicrobial resistance on a global scale. A new article by NPR’s Richard Harris, looked to the predatory bacteria that might be harnessed to “eat” the bad bacteria causing resistant infections. “They’re even living inside us, but at levels so low that they aren’t effectively battling back against dangerous germs. DARPA has been funding research to see if these predatory bacteria can be harnessed as our allies. ‘It’s been very exciting,’ Ringeisen says, as this exploratory phase of research is gradually coming to a successful conclusion.Lab studies that his agency has funded show that the predatory bacteria will attack all sorts of nasties, including bacterial lung infections, the plague and deadly germs that have developed resistance to antibiotics. And the star of this show is an organism called Bdellovibrio, a bacterium that swims around with the aid of a corkscrew tail, and attacks common germs six times its size.”

Blue Ribbon Study Panel on Biodefense – Fits and Starts: Reactionary Biodefense
The next Blue Ribbon Study Panel event will be on Tuesday, October 9th from 10am-3:30pm at the Hudson Institute in Washington, D.C. The meeting will “reexamine the anthrax events of 2001 and other biological events that have occurred in the years since. We want to know where things stand now and how we can better defend the nation against biological threats. Former Senate Majority Leader Tom Daschle will talk about his personal experience with the 2001 anthrax attacks. Among the academic, law enforcement, media, industry, and governmental experts joining us that day are: Dr. Sheri Fink – correspondent, New York Times, and author, Five Days at Memorial: Life and Death in a Storm-Ravaged Hospital; Dr. Scott Lillibridge – Founding Director, Bioterrorism Preparedness Program, Centers for Disease Control and Prevention; Dr. Tara O’Toole – former DHS Under Secretary for Science and Technology; andRear Admiral Stephen Redd – Director, Office of Public Health Preparedness and Response, Centers for Disease Control and Prevention.” 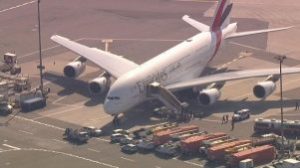 International Flight Quarantined in New York
On Wednesday, there was considerable excitement surrounding a plane that landed from Dubai at JFK International Airport. In mid-air, a reported 100 people became sick, complaining of unknown illness. Following air traffic control notification by the pilots, the plane was met with officials from the CDC to collect information and evaluate symptoms. On Thursday it has been reported that the majority of those sick during the flight were experiencing influenza and other common respiratory illnesses. Perhaps the most entertaining part for those of us watching it unfold was the presence of one 90’s musician – Vanilla Ice. Indeed, the rapper was onboard and quickly became a source for news as he live-tweeted the event. In the words of Global Biodefense‘s Stephanie Lizotte, “Contaminate and glisten”.

Food Insecurity as a Security Challenge
The Center for Strategic and International Studies will be hosting this event on Monday, September 17th, from 6-7pm. “Please join the Center for Strategic and International Studies for a Smart Women, Smart Power conversation with Ambassador Ertharin Cousin. She will discuss global food insecurity and hunger and the role they play in other security issues, including violent extremism.” The discussion will be moderated by Nina Easton, Senior Associate at CSIS and Chair of the Fortune for Powerful Women International. You can register here.

Securing the U.S. From Its Most Dangerous Invader – Infectious Disease
Ashley Arabasadi of STAT news discusses why the United States has a pivotal role in global health security and that the latest Ebola outbreak in the DRC is a not-so-gentle reminder of this. Preventing a pandemic is costly though, so where do we start? “First, it’s imperative to continue funding the overseas operations of the Centers for Disease Control and Prevention. These investments help conduct disease surveillance of human and animal populations, which is vital in the low-income countries where the next deadly virus is likely to originate. CDC operations also include training frontline health workers, improving laboratory testing for faster detection, and building efficient reporting systems so disease outbreaks can be caught early and at the source, all vital elements in preventing epidemics and responding to them.” Arabasadi also underscores the importance of supporting global health efforts like USAID, the GHSA, and ultimately establishing a “well-funded, centralized coordinating body for global health security”.

Women Building Bio Conference
The 2018 Women Building Bio Conference will take place on October 17th, from 7:30am-4:30pm at the Inova Center for Personalized Health in Fairfax, VA. “Challenge new ideas. Discover cutting-edge innovations. Revolutionize best practices. Build a powerful community of collaboration. Women Building Bio is where the vision is transformed into reality. Women advancing the industry with all stakeholders, men and women, front and center joining forces. Come join us for the Third Annual Women Building Bio October 17 at the Inova Center for Personalized Health. Be a part of the vision with Thought Leaders and Change Agents steering the Industry. This is a one-day regional conference converging extraordinary men and women, industry and academia, researchers and innovators, professionals and decision-makers gathering together to cultivate relationships and making an impact.”

Super-Resistant Gonorrhea On the Horizon
Just like a resistant infection, the AMR news isn’t over…the reports of a highly resistant gonorrhea (resistant to both azithromycin and ceftriaxone) swept across the globe earlier this year. Resistant to several other antimicrobials, this case was considered the first reported super-resistant gonorrhea. “It certainly won’t be the last. In the following months, two similar cases would be reported in Australia. Ultimately, the British man’s infection was cured. But not until the patient had received 3 days of intravenous (IV) treatment with ertapenem, a ‘last-resort’ antibiotic normally reserved for severe, life-threatening infections and not intended for garden-variety sexually transmitted diseases (STDs).” Such medical interventions are extremely costly, resource intensive, and prone to issues with patient compliance for those lost to follow-up. The painful truth is that this super-resistant gonorrhea will become more common and a norm. “And that’s where the certainty ends. Because after that happens, a disease that effects 78 million people globally—and has mostly been an unpleasant nuisance since the discovery of antibiotics—will no longer have any known effective antibiotics to treat it. As was seen in the UK case, clinicians may have some weapons in their arsenal for treatment of individual cases, but those options aren’t ideal, nor have they been extensively studied. And new antibiotics for gonorrhea are, at best, still a few years away.”