We hope you had a lovely Thanksgiving! Salmonella is always a risk with turkey but since our readers are fellow biosafety gurus, we’re pretty sure you’ve already scrubbed the kitchen down to the last microbe! Have you reserved your spot for Dr. Robert Kadlec’s talk Preventing Pandemics and Bioterrorism: Past, Present, and Future on December 4th?

Biosecurity in the Age of Genome Editing
In 2013, researchers demonstrated the use of a new genome editing tool called CRISPR, which allows scientists to add, delete, or modify genes more precisely, faster, and cheaper than ever before. This technology promises major beneficial contributions, yet it has the potential to radically alter the security landscape. A new report, “Editing Biosecurity: Needs and Strategies for Governing Genome Editing,” based on two years of study by researchers from George Mason University, Stanford University, and New America examines the issue and provides concrete and actionable options for policy makers. To discuss the results of the study, New America welcomes Gregory Koblentz, Associate Professor and Director of the Biodefense program at the Schar School at George Mason University; Edward Perello, a research fellow at the Institute for Philosophy and Public Policy at George Mason University; Jesse Kirkpatrick, a New America International Security Program Fellow and Assistant Professor at George Mason University, Megan Palmer, Senior Research Scholar, Center for International Security and Cooperation, Stanford University, and David Relman, Professor of Microbiology & Immunology, Senior Fellow at the Freeman Spogli Institute for International Studies at Stanford University, and Chief of Infectious Diseases at the Veterans Affairs Palo Alto Health Care System. This even will be held on Monday, December 3rd, 2018, from 1-2:45pm EST, at New America. You can RSVP here.

Chemical Weapons – OPCW Meetings
No, we’re not talking about the strong cologne/perfume a family member wore to holiday dinner, but rather the truly horrifying weapons that utilize chemicals to cause harm. This week the OPCW (Organisation for the Prohibition of Chemical Weapons) is hosting the Conference of the States Parties (CSP23) to the Chemical Weapons Convention & Review Conference (RC4). The CSP23 involves all 193 members of the OPCW and “oversees the implementation of the CWC, promotes the treaty’s objectives and reviews compliance with the treat” while the RC4 is every five years and “is an opportunity for all States Parties to review the operations of the Chemical Weapons Convention and set a strategic direction for the OPCW for the next five years and beyond.” You can find webcasts of the events here. If you’re looking for in-depth reviews of each day, get the scoop from CBW Events, which provides detailed accounts of the day’s events. Alicia Sanders-Zakre of the Arms Control Association is live tweeting as well (@Azakre) throughout the meetings. On Monday, it was reported that the U.S. and the UK were clashing with Russia regarding the new investigation team. “The U.S. and Western powers on Monday clashed with Russia and others over whether the global chemical weapons watchdog could start apportioning blame for poison gas and nerve agent attacks. At a heated session of the Organization for the Prohibition of Chemical Weapons’ annual conference, both sides bitterly fought over a June decision for the group to set up a new investigative team which could name the perpetrators of chemical attacks — a major change in the group’s rules.” An interview with the new Director General of the OPCW, Fernando Arias, was recently published here, where he noted that “I am committed to working with our member-states to protect, defend, and uphold the CWC. This means implementing the mandate given to the organization by the convention, as well as the decisions adopted by the executive council and the plenary body, the Conference of the States-Parties. I will also respect and develop the important work undertaken by my predecessors and their teams.” If you’re needing a refresher on CW, check out the latest book published by the Royal Society for Chemistry, Preventing Chemical Weapons: Arms Control and Disarmament as the Sciences Converge. There was also a publication in Science on preventing chemical weapons as sciences converge – “Concerns about such malign applications of chemical technology are exacerbated by the unstable international security environment and the changing nature of armed conflict, ‘where borderlines between war, civil war, large-scale violations of human rights, revolutions and uprisings, insurgencies and terrorism as well as organized crime are blurred’. It is thus essential that the global community regularly review the nature and implications of developments in chemistry, and its convergence with the life and associated sciences, and establish appropriate measures to prevent their misuse.”

E coli Outbreak – Don’t Eat Romaine Lettuce!
The CDC is warning people not to eat any romaine lettuce amid an E coli O157:H7 outbreak. “So far 32 illnesses have been confirmed in 11 states, and the Public Health Agency of Canada (PHAC) has identified 18 people in Ontario and Quebec infected with the same E coli fingerprint. California (10) and Michigan (7) have reported the most cases, with smaller numbers reported by Connecticut, Illinois, Massachusetts, Maryland, New Hampshire, New Jersey, New York, Ohio, and Wisconsin. Regarding the US cases, the CDC said illness onsets range from Oct 8 to Oct 31, and 13 people have been hospitalized, including one with hemolytic uremic syndrome, a potentially fatal kidney complication. No deaths have been reported.” Reminder – officials have expanded the warning to all romaine lettuce – bagged, mixes, etc.

Review of the Blue Ribbon Study Panel “Biodefense Indicators: Progress in Implementing the National Blueprint for Biodefense”
GMU Biodefense graduate students Michael Krug and Alexandria Tepper have provided us with a recap of this November 14th meeting. “The panel’s initial remarks involved assessing the progress of the federal government to the threat of a biological element, whether it be naturally-occurring, man-made, or accidental, since the release of the panel’s  Blue Ribbon Blueprintin 2015. Senator Lieberman was determined to reinforce the idea that the Blue Ribbon Blueprint should ‘provide a roadmap to improving how we prepare for, defend against, and respond to biological threats of all natures.’ The tone reflected by the chairs acknowledged that the progress made by the federal government has been promising but incomplete.”

Ebola Outbreak Updates & A Tour of the NIH Special Clinical Studies Unit
More peacekeepers and aids have been killed by armed rebels near the Ebola hotspot in the DRC (Beni). Seven UN peacekeepers were killed this weekend. “The action against the armed rebels, who have been responsible for several attacks against civilians in Beni that have stymied response activities, involved the UN mission known as MONUSCO and government armed forces. Their target was the Allied Democratic Forces (ADF).” On Thursday, 13 new cases were reported in the DRC, including 7 cases in Katwa. This brings the total case count  to 386 (339 confirmed, 47 probable, and 219 deaths). “Five of the new cases from Katwa were family members of a confirmed case-patient who died earlier this month. According the Ministry of Health, the family refused vaccination and follow-up before agreeing to be treated in a Butembo Ebola treatment center. The single cases from Oicha and Mutwanga are related to cases from Beni, officials said.” Care for these patients can be tricky when it comes to maintaining infection prevention practices. The NIH just gave a tour of their Special Clinical Studies Unit (SCSU), which is a special isolation unit used for the medical care of patients with high consequence pathogens, like Ebola. ” There, protected by negative air pressure and varying levels of biosecurity, volunteers can be safely exposed to the flu, respiratory syncytial virus (RSV), mosquitoes, or other infectious diseases or vectors for study purposes, without risk to other patients in the Clinical Center. They can also receive care while researchers study their reactions to pathogens in experiments that may lay the foundation for improved vaccines and treatments.”

Review Essay – Rhodeshia’s Improbably Dirty War
Kathleen M. Vogel is reviewing Glenn Cross’s (he’s a GMU Biodefense PhD alum!) account of the Rhodesian use of biological weapons. Vogel points to the recent Salisbury incident – “There are ongoing deliberations by the Organisation for the Prohibition of Chemical Weapons (OPCW), the implementing body of the Chemical Weapons Convention, to determine an international response to this breach of the global norm against chemical-weapons use. The Salisbury incident has underscored long-standing domestic and international concerns about the use of chemical and biological (CB) agents by state and non-state actors.” Cross’s book discusses the sordid history of Rhodesian use of chemical and biological weapons from 1975-1980 – “Dirty War is the culmination of nearly two decades of painstaking research and interviews of dozens of former Rhodesian officers who either participated or were knowledgeable about the top secret development and use of CBW. The book also draws on the handful of remaining classified Rhodesian documents that tell the story of the CBW program. Dirty War combines all of the available evidence to provide a compelling account of how a small group of men prepared and used CBW to devastating effect against a largely unprepared and unwitting enemy. ” 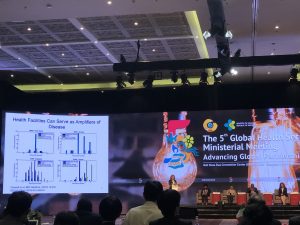 Global Health Security Meets Infection Prevention
GMU Biodefense PhD student and Global Health Security Ambassador Saskia Popescu gives us a preview of the 5th Ministerial Meeting for the GHSA (more to come, so keep an eye out in the coming weeks!). “Overall, the 5th Ministerial Meeting of the GHSA was a profound experience, not only for an infection prevention epidemiologist like myself, but as a person dedicated to public health and preventing the spread of infectious diseases. It was inspiring to see participants from private industry to government working to help facilitate capacity building from the ground up.  The GHSA is a particularly unique effort in that it brings together so many different people—from private companies to government health officials and even academia. In many ways, this is a perfect example of the diverse efforts needed to address health security vulnerabilities. In a single day, I was fortunate to chat with Swiss health officials on antimicrobial resistance and bioterrorism, university professors on hospital infection prevention as a preparedness tool, and GE healthcare on their efforts to fund health care capability building.”