Review – Preventing Pandemics & Bioterrorism Event
If you weren’t able to make this event on Tuesday evening, you’re in luck. We’ve got everything from the program to a detailed recap. You can also see the slides from our featured speaker, Dr. Robert Kadlec of ASPR. We highly suggest watching the recording of the event (to be released shortly) as you’ll not only learn about pandemic preparedness from Dr. Kadlec, but also the evolution of biodefense strategies through several administrations. “’Biology makes our world a better, safer place, but it could also end the world,’ he said. ‘The key is understanding the opportunities, risks, and considerations for what we need to do in security.’ For students in the field, ‘the bio-economy is an extraordinary opportunity,’ he said. ‘What Greg Koblentz [director of the Schar School biodefense program] has done is an incredible effort. I understand he has 300 graduates, 60-plus students this year—that’s a testimony not only to Greg and his counterparts on the faculty but also to the interest and recognition of how important a topic this is’.”

Biosecurity in the Age of Genome Editing
Last week was a busy biodefense events week! If you weren’t able to attend the launch of New America’s latest report on biosecurity in the age of genome editing, we’ve got a full summary from GMU Biodefense graduate student Justin Hurt. Justin noted that “the discussion centered around the findings of the recently released study, Editing Biosecurity, Needs and Strategies for Governing Genome Editing, and included authors Jesse Kirkpatrick of Arizona State University, Greg Koblentz and Edward Perello, both from George Mason University, and Megan Palmer and David Relman, both from Stanford University. Each author spoke about specific portions of the study, a two-year project designed to ascertain the inherent risks and security challenges regarding the rapidly developing field of genome editing, which includes such technologies as the highly promising but potentially risky CRISPR gene editing technique.” We also have created a page with everything from the video recording of the event to the full report available in one place to make it easier.

15 Worrying Things About the CRISPR Baby Situation
Speaking of CRISPR concerns….as more information comes out regarding Chinese researcher He Jiankui and his claims of making the first CRISPR-edited babies, here’s a good recap of 15 concerning details. One of the worrisome aspects of the experiment is the lack of clarity surrounding the function of the new mutations- “At least two of the three mutations that He introduced into Nana and Lulu’s genomes are substantial changes that could alter how CCR5 works. Typically, scientists would introduce the same mutations into mice or other lab animals to see what would happen. If they felt reassured enough to move into human patients, they could recruit patients with HIV, take out some immune cells, introduce the new CCR5 mutations, transplant the cells back, and monitor the volunteers to see if they’re healthy. ‘That could take months or years, but to do anything less would be cutting corners,’ Ryder says.” Bioethicist Kelly Hills of Rogue Bioethics noted the key differences though regarding innovative treatment and clinical research. “In the USA, there is no way any government authority would demand that a woman pregnant with a genetically modified fetus abort the pregnancy, so in the end, we have to ask: will a $100,000 fine and maybe a year in jail, as the most severe theoretical punishments, actually discourage people, especially given the very long history of both the FDA allowing innovative treatment AND not intervening when companies are clearly breaking much more clearly established laws around clinical research and human subjects Finally, and one of the other reasons I tie this to CellTex, the FDA often seems to expend its energy on enforcement of issues where they will have strong public support. In the case of stem cell injection, though, public support for prosecution was not there—and likewise, the American public overwhelmingly supports germline gene editing of serious medical issues. It is simply not clear the political will would be there to pursue someone doing He’s project in America, even if it were determined to be ‘distributing a new drug.’ (And again, I think it’s much more likely that it would be argued and treated as innovative treatment rather than a new drug—ESPECIALLY if it’s true that the new pregnancy is a PCSK9 modification, rather than CCR5.)”

Biological Weapons Convention – Meeting of States Parties (MSP)
The MSP began this week and not surprisingly, the topic of financing the BWC has been the elephant in the room – overlooked by many countries but not those in the audience. The BWC is in a dire situation due to many countries failing to meet their financial obligations. You can find daily reports from Richard Guthrie here, which provides a detailed account of the meetings and events. Guthrie reported that “Many statements noted that the root cause of the financial difficulties was the late payment of assessed contributions. Numerous calls were made for those states parties behind with payments to clear their arrears and, in future, to pay in full and pay on time. There were a number of expressions of support for some method to smooth cashflows such as a working capital fund. It was noted such a fund could be established through voluntary contributions, by placing any credits from future budgetary underspends into it or by putting arrears payments from past financial years into it. China noted that it had already paid its assessed contribution for 2019 to ease cashflow.” The Joint NGO Statement was also given – emphasizing the important role the NGO community plays in the BWC. One of the main issues discussed was that “over recent months, unsupported allegations of ‘secret laboratories developing biological weapons’ have intensified. These claims risk diminishing the taboo against biological weapons. They create uncertainty around the prohibition and undermine the BWC, and they may give the impression that biological weapons are worth pursuing, possibly even encouraging other nations to do so. If a state party has genuine concerns about a biological weapons threat, there are existing mechanisms and precedent under Article V of the BWC to raise the issue. In the meantime, the international community must push back on unsupported allegations, and step up its efforts to actively devalue biological weapons as a military option.”

Federal Select Agent Program Strategic Plan FY18-FY21
The latest Select Agent Program strategic plan is out! Within this document, there are several goals, such as ensuring the recruitment, development, and retention a knowledgable and professional FSAP workforce, harmonize FSAP organizational processes and inspections, engaging and increasing transparency and highlighting program benefits, etc. “We are pleased to share this FSAP Strategic Plan, which will guide our efforts for the remainder of fiscal year (FY) 2018 through FY2021. Our joint strategic planning effort serves as a clear reminder of the many successes we have achieved together over nearly two decades as FSAP, as well as the myriad challenges against which we must continue to focus in order to sustain and enhance biosafety and security of BSAT in the United States.”

Governance of Dual Use Research in the Life Sciences – NASEM Workshop
“Continuing rapid developments in the life sciences offer the promise of providing tools to meet global challenges in health, agriculture, the environment, and economic development; some of the benefits are already being realized. However, such advances also bring with them new social, ethical, legal, and security challenges. Governance questions form an increasingly important part of the discussions about these advances—whether the particular issue under debate is the development of ethical principles for human genome editing, how to establish regulatory systems for the safe conduct of field trials of gene drive-modified organisms, or many others. However there are continuing concerns that the knowledge, tools, and techniques resulting from life sciences research could also enable the development of bioweapons or facilitate bioterrorism.” The findings of this June 2018 workshop involved the efforts of more than 70 participants from 30 countries and 5 international organizations.

Ebola in the DRC – Updates
As of Wednesday, the additional cases of Ebola in the DRC have raised the total to 458 cases, of which 410 are confirmed, and 263 deaths. “In a weekly report from the WHO African regional office that covered 28 cases reported between Nov 23 and Dec 1, the group said the number of illnesses declined from 46 reported the week before. Weekly deaths dropped from 22 reported 2 weeks ago to 19 last week. Three more infections were reported in healthcare workers, raising the total to 43 illnesses in health workers, 12 of them fatal. Based on locations of cases reported over the past 3 week weeks, Beni, Katwa, and Kalunguta are still the hot spots.” There are 75 suspect cases still being investigated. 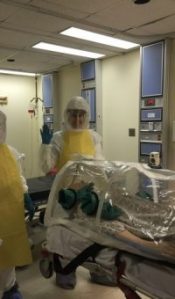 Infection Prevention Training Through the Center for Domestic Preparedness: An Infection Preventionist’s Experience
“For many of us, it has been a while since we’ve donned Ebola personal protective equipment (PPE). In 2014, there was a mad dash to obtain the PPE the US Centers for Disease Control and Prevention (CDC) were recommending for working with patients with Ebola virus disease. We rapidly learned the art that was donning and doffing this enhanced PPE while working to ensure we did not cross contaminate each other, let alone the observer/aid that was helping us. This was a relatively novel moment for many of us in infection prevention and health care. Who would have thought we would be preparing for Ebola in the United States? Last week, I attended the Barrier Precautions and Controls for Highly Infectious Diseases (“HID”) training hosted by the Center for Domestic Preparedness (CDP). CDP is a training center used for military purposes (think chemical and biological incidents, etc). In 2007, the Noble Training Facility was integrated into the CDP and the former Noble Army Hospital was used as a new site to strengthen public health, health care, and medical personnel during disasters and incidents. The CDP is part of the Federal Emergency Management Agency (FEMA) after it was transferred from the Department of Homeland Security in 2007. The whole purpose of CDP is to strengthen critical infrastructure through training and education to state, local, tribal, and territory emergency responders.”

Book Review- Stalin’s Secret Weapon
Searching for a good winter book to read? Look no further – Stalin’s Secret Weapon discusses Stalin’s obsession with biological weapons. “Joseph Stalin’s obsession with weapons of mass destruction included the promotion of biological weapons (BW), but the background to his regime’s development of this type of warfare, with its triumphs and failures, makes for eye-opening and sometimes grim reading. Anthony Rimmington’s book pulls together his 30 years of research and specialist articles, showing first how Russia’s interest can be traced back to the late 19th century when a St Petersburg guards officer was bitten by a rabid horse. The officer’s treatment led to the establishment of groups of physicians and veterinary surgeons studying ways to combat the likes of brucellosis, glanders and rabbit fever, as well as diseases that affected humans, such as smallpox and pneumonic plague. During the First World War the focus shifted to military uses of this knowledge: horses and mules deliberately infected with dangerous bacteria could disrupt entire campaigns, and many of these animal diseases could transfer to enemy troops.”