Good news- spring is in full effect and flu transmission is starting to slow. With summer around the corner, have you registered for our workshop on all things biodefense, from anthrax to Zika?

The Plague Years – How the Rise of Right-Wing Nationalism is Jeopardizing the World’s Health
Maryn McKenna is calling out a very real issue – politics, vaccines, and the reality that “As nativist appeals undermine public health systems and cooperation among countries degrades, the potential for catastrophe increases. We are always at risk of a new disease breaking out, or a previously controlled one surging back. What’s different now is that the rejection of scientific expertise and the refusal to support government agencies leave us without defenses that could keep a fast-moving infection at bay. Pathogens pay no respect to politics or to borders. Nationalist rhetoric seeks to persuade us that restricting visas and constructing walls will protect us. They will not. ‘Nationalism, xenophobia, the new right-wing populism in Europe and the United States, are raising our risk,’ said Ronald Klain, who was the White House Ebola response coordinator for President Barack Obama and now teaches at Harvard Law School. ‘There’s a focus not so much on stopping infectious diseases as much as there is on preventing the movement of people to prevent the transmission of diseases. And that’s not possible, because no matter what you do about immigrants, we live in a connected world’.” Moreover, that belief system can be seen in the White House, as President Trump tweeted during the 2014 Ebola outbreak – “Keep them out of here,” he tweeted about American missionaries who fell ill in West Africa. “Stop the Ebola patients from entering the U.S.” and “The U.S. cannot allow Ebola infected people back.” As McKenna notes “This is the perverse legacy of nationalism in power: By stigmatizing immigrants and segregating them, xenophobia can turn the lie of the ‘dirty foreigner’ into truth. ” 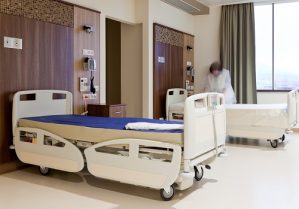 Hospital-Associated Conditions Penalties: What They Really Mean
Just how good is your local hospital at preventing infections in patients? GMU biodefense doctoral student and infection preventionist Saskia Popescu is breaking down what these quality metrics really mean and how hospitals are scoring. “In 2014, CMS established another rule tying health care quality of care and reimbursement—the HAC Reduction Program. Although this started with reporting of certain conditions, such as central-line associated bloodstream infections, these pay-for-performance programs were expanded over time. The program links hospital performance in certain categories with reimbursement. That’s right, if a hospital performs poorly, they can be hit where it hurts—the bank. Scores are determined by a hospital’s performance in 2 domains—1 includes indicators like pressure ulcers and in-hospital falls with injury, while the second domain focuses on health care-associated infections that include central-line associated bloodstream infections, catheter-associated urinary tract infections, certain surgical-site infections, methicillin-resistant Staphylococcus aureus bacteremia, and Clostridium difficile (C diff) infections. Considering there are 500,000 cases and 15,000 deaths a year related to C diff in the United States, it’s not surprising that CMS would want to crack down on those cases associated with hospitalization.” “There are just over 5000 US community hospitals that will likely receive CMS reimbursement in FY2019, and 800 (16%) of these institutions experienced financial penalties related to poor performance. That’s a pretty substantial amount, but the painful truth is that this number is likely higher considering there have been concerns for hospitals failing to report HACs and a general lack of CMS data validation.”

Ebola Continues to Hit the DRC
We’ve surpassed 1,000 cases and are now beyond the point where the WHO called a PHEIC in the 2014-2016. On Tuesday, the “World Health Organization (WHO) today reiterated that the outbreak in the Democratic Republic of the Congo (DRC) will be defeated only with local communities at the helm of response efforts. The message came from Ibrahima-Soce Fall, MD, WHO assistant director-general for emergency response, who held a brief teleconference this morning from Butembo. With 72 Ebola cases reported last week and 56 in the previous week, March was a low point for responders, as activity spiked and the outbreak topped the 1,000-case milestone.” On Thursday, it was reported that 7 new cases were identified, including a healthcare worker. “The healthcare worker in Musienene brings the total number of health workers infected during the outbreak to 82 (7.4% of all confirmed or probable cases), and 29 of them have died, the DRC said. In an update released late yesterday, the DRC recorded 8 new confirmed cases, and 7 deaths, including 5 community deaths. Butembo and Katwa each had a community death, and Mandima recorded 3. Community deaths have been a compounding factory of this outbreak, as they enable the virus to spread more easily among family members and funeral attendees.” Based off the latest case counts, three main areas have been the hotspots for the outbreak – Katwa, Vuhovi, and Mandima.

Next Generation Biosecurity Online Course
“An open online course exploring biosecurity and biological threats begins this week on FutureLearn. This course is for professionals working in public and global health, international security, politics and international relations. It may be of particular use to biosafety officers in academia, industry or government, and early-career science scholars in the life sciences.” You can access the course here.

Why the Scientific Debate Over a UW Bird Flu Study Isn’t Going Away
“A University of Wisconsin-Madison laboratory is set to resume experiments that could build the foundation of an early warning system for flu pandemics. The research is based on altering a deadly type of the influenza virus in a way that could make it more dangerous, though, and critics say its approval lacked transparency and creates unnecessary risks. Yoshihiro Kawaoka is a virologist and professor at the UW School of Veterinary Medicine and the University of Tokyo who has figured prominently in Wisconsin’s long-term central role in flu research. Kawaoka’s work has been the focus of fierce debate among epidemiologists ever since he announced in 2011 that his lab had successfully altered the H5N1 subtype of the influenza A virus to be transmittable through the air among ferrets. These small mammals are a common laboratory stand-in for studying human flu transmission.” “That debate has lingered since 2011 and intensified in early 2019 after the federal government approved funding for Kawaoka to continue his research. Marc Lipsitch is a professor of epidemiology and director of the Center for Communicable Disease Dynamics at Harvard T.H. Chan School of Public Health. He’s a longtime critic of research that modifies flu viruses to be more dangerous in humans. ‘What worries me and my colleagues is the effort to modify viruses that are novel to humans and therefore to which there’s no immunity in the population, and where a laboratory accident wouldn’t just threaten the person who got infected … but potentially could be the spark that leads to a whole pandemic of infectious disease,’ Lipsitch told WisContext.”

New Plant Breeding Tech for Food Safety
Tackling the issue of food safety is up there with a universal flu vaccine – something we all want, but a task requiring a Herculean effort. A new insight to this problem has come forward though and the authors “argue that with careful deployment and scientifically informed regulation, new plant breeding technologies (NPBTs) such as genome editing will be able to contribute substantially to global food security. Previously, conventional plant breeding through cross- and self-pollination strategies played a major role in improving agricultural productivity. Moreover, the adoption of genetically modified (GM) crops by smallholder farmers has led to higher yields, lower pesticide use, poverty reduction, and improved nutrition. Nevertheless, so far only a few developing and emerging economies—such as China, India, Pakistan, Bangladesh, and South Africa—have embraced GM crops. Even though three decades of research show that GM crops are no more risky than conventional crops, many countries in Africa and Asia are hesitant to promote the use of GM crops, largely because of erroneously perceived risks and fears of losing export markets to Europe.”