On November 24, Turkish F-16s shot down a Russian SU-24 bomber which had been flying over Syria, after an alleged violation of Turkish airspace.[1] Needless to say, the details are still emerging and the facts are still highly contested. The New York Times has an excellent comparison of claims made by Turkish and Russian officials, including the radar maps released by each country showing the airspace violation (or lack thereof).[2] Russian President Vladimir Putin called the shootdown a “stab in the back” and promised harsh consequences. Turkey called for an emergency meeting of NATO.

This incident and its bellicose rhetoric sparked immediate buzz about declarations of war, what exactly NATO owes Turkey vis-à-vis Russia[3], and the possibility of military confrontation between Russia and the West.  One particular phrase was cautioned against by reputable folks and seriously considered by less-than-stellar[4] sources: World War 3. I think this is really interesting, so I turned to good old search analytics to see how the internet reacted: 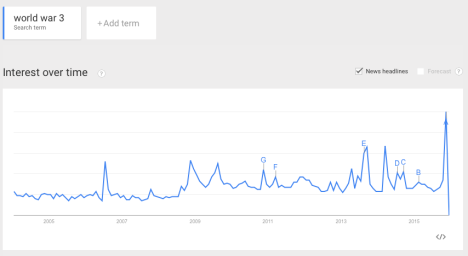