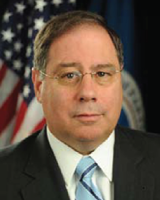 The Biodefense Policy Seminars are  the D.C. area’s premiere speaker series focused on biodefense and biosecurity issues. The monthly seminars – free and open to the public – feature leading figures within the academic, security, industry, and policy fields of biodefense. Past speakers have included Dr. Charles Bailey, Executive Director at the National Biodefense Center and Dr. Alexander Garza, former Assistant Secretary for Health Affairs and Chief Medical Officer of the Department of Homeland Security.

Dr. Daniel M. Gerstein has served as the Deputy Under Secretary for Science & Technology in the
Department of Homeland Security since August 2011. He is also an Adjunct Professor at American University in Washington, DC at the School of International Service (SIS) where he teaches graduate level courses on biological warfare and the evolution of military thought. Dr. Gerstein has extensive experience in the security and defense sectors in a variety of positions while serving as a Senior Executive Service (SES) government civilian, in uniform, and in industry. Before joining DHS, he served as the Principal Director for Countering Weapons of Mass Destruction (WMD) within the Office of the Secretary of Defense (Policy). He has served on four different continents participating in homeland security and counterterrorism, peacekeeping, humanitarian assistance, and combat in addition to serving for over a decade in the Pentagon in various high level staff assignments.