Dirty bombs, Zika virus, and biosecurity in Iraq? That’s just a taste of the biodefense news we’ve got in store for you this week. While norovirus hits the East Coast (thanks, oysters!) and an additional three cases were confirmed in the seven-month-long Listeria outbreak associated with Dole salads, it’s no wonder there’s been work to build a new US food safety system. Next month the CDC will be working with state and local officials to establish plans in the most hard-hit Zika areas.

Assessing America’s Soft Underbelly and The Threat of Agroterrorism
The House Committee on Homeland Security’s Emergency Preparedness, Response, and Communications Subcommittee held a hearing on Friday in which they discussed and reviewed the risk of agroterrorism or natural agro-disasters. Disruption to the agriculture infrastructure and economy could be devastating to the US. Regardless if it’s private or public sectors, preparedness is vital to reduce calamitous damage. “US food and agriculture accounts for roughly one-fifth of the nation’s economic activity, contributed $835 billion to the US gross domestic product in 2014, and is responsible for one out of every 12 US jobs, according to Subcommittee Chairman Martha McSally (R-AZ).” Consider the impact of bovine spongiform encephalopathy (BSE) or Highly Pathogenic Avian Influenza (HPAI) on their respective sectors and country economies. Some of the highlighted vulnerabilities and challenges were insufficient quantity of Foot and Mouth Disease (FMD) vaccine, gaps in US biosecurity, traceability, gaps in detection, data sharing for regulated disease, and more. 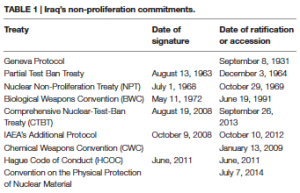 GMU Biodefense director and professor, Dr. Gregory Koblentz, and Mahdi al-Jewari, director of the biology department for the Iraqi National Monitoring Authority in the Iraq Ministry of Science of Technology, have joined together to discuss the furthering of Iraqi biosecurity. Mahdi al-Jewari visited GMU in early 2015 to speak on global biorisk management, hosted by the GMU School of Policy, Government, and International Affairs. In their research, Dr. Koblentz and Mr. al-Jewari discuss Iraq’s implementation of its non-proliferation commitments, highlighting that since 2004 “Iraq has taken a series of practical steps to implement its obligations under international non-proliferation treaties to prevent the proliferation of weapons of mass destruction and their means of delivery to states and non-state actors.” The Iraqi National Monitoring Authority, established in 2012, strives to strengthen their biosecurity program through three primary functions: compliance, monitoring of dual-use materials, and capacity building. The National Biorisk Management System has also highlighted four priorities to “counter biological threats: establishing a national pathogen list, building laboratory capacity, developing the capability to conduct joint law enforcement–public health investigations, and establishing a biorisk management law. The NBMC has established sub-committees charged with developing new policies and programs to achieve these four objectives.” While sustainability will be the most challenging hurdle for Iraq, commitment to investments  in infrastructure, IT, biosecurity, and biosurveillance systems can help them overcome these difficulties.

Just How Far Down the Zika Rabbit Hole Are We So Far?
It seems like every week we’re learning new things about Zika virus and how much work needs to be done. I wonder, how far have we made it down the rabbit hole for Zika and how much more do we have to go? While the Aedes mosquito is the reigning king of Zika virus infections, what about animals? The CDC recently released information regarding the concerns over zoonotic cases. Originally discovered in a monkey in the Zika Forest in 1940’s Uganda , the CDC maintains that “at this time, animals do not appear to be involved in the spread” and that there is no evidence of zoonotic transmission. “Nonhuman primates (apes and monkeys) have shown the ability to become infected with Zika virus; but, only a few naturally and experimentally infected monkeys and apes have had any signs of illness at all, and then it was only a mild, transient fever without any other symptoms.” As international public health teams descend upon the outbreak regions, we will surely be learning more about this outbreak. Perhaps the most challenging issue is the dissemination of information, especially in regions of high transmission. University of Arizona Mel & Enid Zuckerman College of Public Health infectious disease professor, Dr. Kacey Ernst, is one of the top vector-borne researchers and she recently explained: “The Zika virus pandemic, thought to be primarily caused by transmission of the virus through Ae. aegypti requires urgent action to determine the role of the virus in neurological sequalea, including microcephaly as well as the relative transmission potential of Ae. albopictus. Given the important role of communities in preventing the proliferation of the peridomestic, anthropophilic Ae. aegypti, communication between the scientific communities and the public must be heightened to ensure timely dissemination of surveillance information. While much of the United States is currently too cold to allow high densities of the primary vector of Zika virus, Ae. aegypti, the growing evidence surrounding the role of sexual transmission in the spread of Zika could imply that outbreaks of disease are possible even when transmission by the mosquito is not. More research is needed to delineate the two modes of transmission and the role that sexual transmission may be playing in the explosive spread of Zika across Latin America and the Caribbean.” In more Zika updates, blood samples from French Polynesia patients with Guillain-Barré syndrome (GBS) during their Zika virus outbreak are revealing the first look into the reality that Zika may actually cause GBS. The CDC is also urging pregnant women to avoid the summer Olympics in Brazil due to the outbreak. The FDA also just issued their Emergency Use Authorization for a Zika diagnostic tool for qualified countries. As of March 2nd, the CDC has reported 153 travel-associated Zika virus cases within the US.

Education Gaps on Dirty Bombs
David Ropeik from Scientific American discusses the impact that poor education and fear regarding dirty bombs can pose during an emergency. “The prospect of such a bomb seems terrifying, but anyone who knows the basic science of radiation biology knows that it wouldn’t cause much health damage, because the dose of radioactivity to which most people might be exposed would be very low. And experts know, based on the 65 year Life Span Study of the survivors of atomic bomb explosions in Japan, that even at extraordinarily high doses, ionizing radiation only raises lifetime cancer mortality rates a little bit—just two thirds of one percent for survivors who were within three kilometers of ground zero.” Few people know that low doses from a dirty bomb exposure pose little (not zero, but minimal) health risks, but rather people tend to hear “radioactive” or “nuclear radiation” and run screaming to the hills like a zombie hoard is approaching. While Ropeik points out that there will of course be devastation and economic damage, the resulting stress, fear, and public outcry for retaliation can be just as damaging. So what can we do? He points to the US Nuclear Regulatory Commission (NRC) and CDC educational sites, but emphasizes that in the end, a communication campaign to combat fear would “take at least some power of a dirty bomb to terrorize us out of the hands of the terrorists”.