Summer is in full swing and that means the mosquitoes are out in force. Before you make those pesky bugs your biggest enemy, don’t forget about the threat of antibiotic resistance and the current MCR-1 Klebsiella outbreak in China!

U.S. Investment in Global Health Security  – The Good and The Bad
Whether it be an intentional, accidental, or natural biological event, infectious diseases can devastate local economies and populations. “Catastrophic” is a term commonly used for such events. Disease knows no borders or boundaries, which means that our global health security is only as strong as the weakest link. To aid in the stability of global health security, the State Department funds projects around the world to help improve biosafety and biosecurity. The philosophy is that if we can train local trainers to establish expertise and biorisk programs, it would lay the foundation for biosecurity/biosafety for the future. “The State Department carefully evaluates and selects the most impactful projects for each region, pairing local needs with appropriate subject matter expertise. One source of such expertise is Sandia National Laboratories (SNL), which has received State Department funding to implement numerous health security projects. Just this April, Lora Grainger, working at the Labs’ International Biological and Chemical Threat Reduction (IBCTR), travelled to Algeria to train Algerian trainers on a project funded by the State Department. Participants included scientists working in Algeria’s national network of laboratories managed by the Ministry of Agriculture, the Institut National de Médecine Véterinaire (INMV).” This partnership is just one of many and involves education that is tailored to the skills and needs of those being trained. Global health security is bigger than any one country and it’s vital to not only strengthen our own practices, but also facilitate its development in countries that might not have all the resources needed. Speaking of U.S. health security efforts, don’t forget to catch the Operation Whitecoat documentary on the June 1st.

While these are great efforts the U.S. is putting forward, there is also an internal struggle to maintain public health during a hiring freeze. The freeze was imposed by President Trump’s executive order in late January, which covers currently open positions, blocks transfers, and prevents new positions from being created. It was recently reporting that nearly 700 positions within the CDC are vacant due to the ongoing hiring freeze. “Like HHS, the State Department and the Environmental Protection Agency have maintained the freeze as a way of reducing their workforces and reshaping organizational structures after a directive last month from the Office of Management and Budget that said all federal agencies must submit a plan by June 30 to shrink their civilian workforces. HHS, State and EPA also face significant cuts in the Trump administration’s budget proposal for the fiscal year starting Oct. 1. The administration, which unveiled a ‘skinny budget‘ for fiscal 2018 in March, is scheduled to release its full budget next week. A senior CDC official said unfilled positions include dozens of budget analysts and public health policy analysts, scientists and advisers who provide key administrative support.” A new CDC document notes that at least 125 job categories have been blocked from being filled, which includes positions in the Office of Public Health Preparedness and Response. 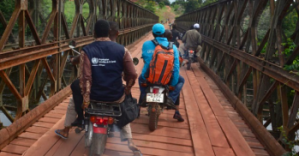 Ebola in the DRC – Updates
While we’re honoring researchers and workers for their efforts during the 2014/2015 West Africa outbreak, Ebola continues to rage through the DRC. You can find daily situation reports here from the WHO, as the numbers of reported cases are constantly changing. The WHO is reportedly optimistic that it can contain the outbreak and many are curious to see how the new director general will handle such challenges. The latest situation report from the WHO is pointing to six more cases of Ebola, bringing the total suspected cases to 43. 365 people are currently under monitoring in the DRC. Researchers have also made substantial progress towards understanding how Ebola disables the immune system so effectively. In response to this latest outbreak, the WHO is requesting funding to ensure adequate response to the DRC outbreak.

Pandemics, BT, & Global Health Security Workshop – Instructor Spotlight
We’re excited to announce that Kendall Hoyt is our instructor spotlight this week! Dr. Hoyt is an Assistant Professor at the Geisel School of Medicine at Dartmouth where she studies U.S. biodefense policy and biomedical R&D strategy. She is also a lecturer at the Thayer School of Engineering at Dartmouth College where she teaches a course on technology and biosecurity. She is the author of Long Shot: Vaccines for National Defense, Harvard University Press, 2012. She serves on the National Academy of Sciences Committee on the Department of Defense’s Programs to Counter Biological Threats and on the advisory board of the Vaccine and Immunotherapy Center at Massachusetts General Hospital. Kendall Hoyt received her Ph.D. in the History and Social Study of Science and Technology at the Massachusetts Institute of Technology in 2002 and was a Fellow in the International Security Program at the Belfer Center for Science and International Affairs at the Harvard Kennedy School of Government from 2002-2004. Prior to obtaining her degree, she worked in the International Security and International Affairs division of the White House Office of Science and Technology Policy, the Washington DC office of McKinsey and Company, and the Center for the Management of Innovation and Technology at the National University of Singapore. Did I mention that she’s also done work on Ebola and has written extensively about medical countermeasures for the disease? Dr. Hoyt is not only an expert on biosecurity and the impact of technology, but will take students through the journey of medical countermeasures and security.

The Finish Line in Ending Pandemics and The Future of the WHO
The recent election of a new WHO director-general highlights the current global shift in priorities, and yet the reality is that we’re still fighting an uphill battle against infectious disease and the threat of a pandemic. Recent decades have shown that outbreaks have been increasingly common, taking advantage of globalization, growing populations, and spillover. Avian influenza has been knocking at the door for a while…while bursts of Ebola and SARS have shaken global health security to its core. MERS has also triggered such events in hospitals, leaving no environment safe from emerging infectious diseases. The list of worrying viral diseases has also grown and taught us a rather painful truth – pandora’s box is already open and every time we think we’ve closed it…we realize the seal just isn’t that tight. “Dynamic, rapidly evolving viral threats emerge with increasing frequency, exploiting new pathways in endless pursuit of their biologic imperative. These viruses are the paradigm of adaptive learning. Pushing and probing at our defenses, they shift to new hosts, opportunistically hijack transmission routes, and acquire capacities to evade immune detection. They are subject to no rules of engagement, and their viral intelligence is anything but artificial”. Our new strategy is now to strengthen our detection efforts and to build up response processes. Many have highlighted that what we’ve seen is just a small percentage of what’s out there, but that doesn’t mean we have to keep our heads buried in the sand forever. The future of international disease response will change with the appointment of the new WHO director-general, especially for poor countries dependent upon resources. On Tuesday, it was announced that Ethiopia’s Dr. Tedros Adhanom Ghebreyesus was voted director-general. Dr. Ghebreyesus is the first ever African director-general and brings to the position a long history of health stewardship as a former health minister in Ethiopia. Not only is this election particularly significant as the future of the WHO will be heavily weighed against its failures in recent years, but recent accusations against the newly elected director-general have created further doubts as to the stability of the organization.

Double-edged Sword Research
A new report from the Swiss Academies of Art & Sciences is drawing attention to the need for continued conversation and engagement about the potential for misuse in life sciences. As a result of the workshop, a report was developed highlighting “six issues that should be considered when designing, conducting, and communicating research projects. Each issue is illustrated with examples from actual research projects.” In fact, CRISPR inventor, Jennifer Doudna, is drawing attention to the promises and perils of the gene-editing technology. She points to the worries of creating designer embryos while contrasting the promises of reducing mosquito-transmitted diseases. In fact, recent work has shown some promise in using CRISPR to fight HIV. “Part of the problem is HIV’s ability to squirrel itself away inside a cell’s DNA – including the DNA of the immune cells that are supposed to be killing it. The same ability, though, could be HIV’s undoing. ast week, a group of biologists published research detailing how they hid an anti-HIV CRISPR system inside another type of virus capable of sneaking past a host’s immune system. What’s more, the virus replicated and snipped HIV from infected cells along the way.” While this work has only been done in mice and rats, the concept is promising. Overall, these advances bring about exciting future possibilities, but it’s important to remember that there are dangers too – whether it be tampering with human evolution, contaminated CRISPR kits, nefarious actors using them for terrorism, etc. The complexities of CRISPR and genetic engineering are only growing, which makes the 2018 arrival of the peer-reviewed publication, The CRISPR Journal, even more relevant.