Summer Workshop on Pandemics, Bioterrorism, and Global Health Security: From Anthrax to Zika
The early-bird registration discount deadline is fast approaching, so make sure you’re signed up for the workshop on all things health security from July 18-20! Whether it’s the 2001 anthrax letter attacks, SARS and avian influenza, Ebola in West Africa, or dual-use research of concern, we’ll be covering it all in this three-day workshop. Where else can you mingle with some of the top minds in the field, engage with other passionate health security professionals, and learn about the latest issues in biodefense?

80,000 Hours Interview With Dr. Tom Inglesby – Careers & Policies That Can Prevent Global Catastrophic Biological Risks
If you’re not listening to the 80,000 Hours podcast, make sure to add it to your list. This is a wonderful podcast on making the right career choices and lucky us, they’re covering global health security jobs. In October, NTI’s Dr. Beth Cameron spoke about fighting pandemics and the challenge of preparing an entire country. Cameron spoke about the current state of American health security, what we’ve learned, new technologies, and more. This week, they spoke with Dr. Tom Inglesby from the Johns Hopkins Center for Health Security on how passionate health security gurus can pursue a career in the field, the top jobs, worrisome scientific breakthroughs, etc. You’ll even catch Dr. Inglesby discuss PhD programs and advisors in the field, in which he names GMU’s very own Dr. Gregory Koblentz! During his talk, Inglesby notes that “I don’t think it’s a good approach to think about it [catastrophic biological risk] as zero sum with other epidemic problems and here’s why: I think in many cases it’s gonna be similar communities that are thinking about these problems. I don’t think it’s likely, even if we really decided to get very serious as a world, I don’t think it’s likely that there will be a community solely dedicated. I don’t want to say never, because it could happen, but I don’t think it’s likely that there will be a robust enduring community of professionals that would only, solely be dedicated to global catastrophic risk, biological risks alone.”

An Afternoon with ASPR – Dr. Robert Korch and Dr. Dana Perkins
GMU Biodefense MS student Anthony Falzarano is reporting on his time at the National Academies monthly series on biological, chemical, and health security issues. “This luncheon – consisting of an open forum session with a two-member panel and a moderator – featured Dr. George W. Korch and Dr. Dana Perkins, both from the Department of Health and Human Services office of the Assistant Secretary for Preparedness and Response (ASPR). Drawing from their current roles with ASPR as well as their illustrious careers and vast experiences, two presenters made for a compelling afternoon discussing health security issues and the work being done by ASPR to prepare for and address them.” Make sure to read his report-out on this luncheon to learn Dr. Korch’s favorite priorities for ASPR! 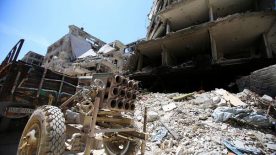 Chemical Weapons Attack on Douma – Update
Last Saturday, 105 missiles were fired against three Syrian chemical weapons facilities in a joint effort by the U.S., UK, and France. While this is unlikely to have completely removed Assad’s chemical weapons capabilities, many are wondering how effective the airstrike truly is. “‘This is now part of their standard combat doctrine’,” said Gregory Koblentz, a chemical weapons expert at the Schar School of Policy and Government at George Mason University. The attack April 7 that triggered the U.S.-led retaliatory strikes forced the surrender of a rebel group holed up in a suburb of Damascus. ‘It changed the course of battle on the ground,’ Koblentz said.” Social media is also increasingly playing a large role in the U.S. and Russian dialogue of the attacks. “The heavy reliance of President Donald Trump’s administration on publicly available information marks a shift from his predecessor’s, which insisted on obtaining physical evidence of chemical weapons use with an established chain of custody before considering the use of force. It also highlights the difficulties Western intelligence agencies have faced in obtaining such evidence — blood, hair, or soil samples — from the Damascus suburb of Douma in the days following the April 7 chemical weapons attack that left nearly 50 dead and hundreds wounded.” The Director-General of the OPCW (Organization for the Prohibition of Chemical Weapons) recently provided an update on the fact-finding mission (FFM) in Douma, which you can find here. Challenges were found in OPCW actually getting into the site. “The United Nations Department of Safety and Security (UNDSS) has made the necessary arrangements with the Syrian authorities to escort the team to a certain point and then for the escort to be taken over by the Russian Military Police. However, the UNDSS preferred to first conduct a reconnaissance visit to the sites, which took place yesterday. FFM team members did not participate in this visit.On arrival at Site 1, a large crowd gathered and the advice provided by the UNDSS was that the reconnaissance team should withdraw. At Site 2, the team came under small arms fire and an explosive was detonated. The reconnaissance team returned to Damascus.” “The delay in the inspectors’ arrival, 10 days after the attack, will raise fresh concerns over the relevance of the OPCW investigation and possible evidence-tampering. The efforts to investigate the attack, which has been blamed on Bashar al-Assad’s government and sparked a joint operation by the US, Britain and France to bomb chemical weapons facilities near Damascus, has been repeatedly delayed despite Syria’s claim to have established full control over Douma and the surrounding region.” Koblentz notes that “Douma has been completely surrounded by the Syrian government and has been subject to intensive bombardment as part of the regime offensive since February,. The problem is that the territory is now occupied by the Syrian government and the crime scene is no longer secure. It doesn’t lend itself to a credible investigation. It’s like the criminals came back to the scene of the crime and they can do whatever they want with the evidence before the cops show up.”

CRISPR, Avengers, & Super Soldiers, Oh My!
As we get closer to the release of Marvel’s Avengers: Infinity War, discussions about super soldiers and genome editing are growing like a mean, green, fighting machine. A frequent topic of conversation during the December 2017 Meeting of States Parties (at least among the ELBI attendees!), Matt Shearer posed the question – is Captain America a biological weapon? What about the other Avengers though – like Hawkeye, who is one of the few “normal” humans in the group? “Hawkeye’s accuracy with a bow and arrow is heavily dependent on his eyesight, which is clearly more advanced than the average human’s. As far as we know, his genome has not been intentionally altered, leading us to believe that Hawkeye has inherited his extraordinary eyesight from his parents. This theory is strengthened by the fact in the Marvel comic books, Barney Barton, Clint’s brother, is also an accomplished archer thanks to his enhanced vision. Perhaps Hawkeye’s advanced eyesight is the result of thousands of years of genetic evolution in the form of adaptation, genetic drift, or mutation of his ancestor’s DNA.” Writers at Synthego decided to look at which genes would need CRISPR modification to improve vision – like targeting specific opsin genes OPN1SW, OPN1MW, etc. 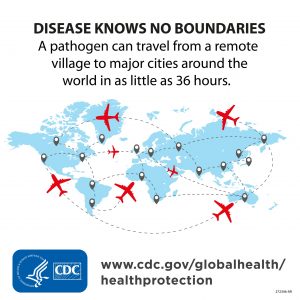 Survey – Most Americans Favor More Funding to Support Biosecurity Capabilities
A new survey by Alliance for Biosecurity has found that public confidence in US preparedness to address biosecurity has dropped. “Nationally, 73% of the 1,612 Americans surveyed say they would have a favorable reaction ‘if Congress decided to increase the budget this year for developing preventive measures for biological and chemical threats.’ How elected officials act on biosecurity issues is important enough to affect voters at the ballot box, according to the survey. A majority of Americans – 52% –  say they are more likely to support their elected representative if that representative is ‘actively engaged in promoting and supporting biosecurity.’ Similarly, 52% say they would become less likely to re-elect a representative who voted AGAINST providing additional funding to the Strategic National Stockpile (SNS) and Biomedical Advanced Research and Development Authority (BARDA). Only 20% say voting against the additional funding would make them more likely to re-elect that representative.” The survey found that only 31% of Americans are confident in our national preparedness, which is a drop from the 50% found in a March 2016 survey.

Curious 2018
Are you planning on being in Germany July 16-18? Don’t miss out on the Curious2018 Future Insight conference in Darmstadt. “The Curious2018 Future Insight conference is a world-renowned event around the future of science & technology and its application to build a better world for humanity. The best minds in science, technology, and entrepreneurship will come together to make great things happen and join forces to realize the dreams of a better tomorrow.” Topics will include healthy lives, materials & solutions, life reimagined (synthetic biology!), vibrant digital, and bright future.

Foodborne Illness Outbreaks – Romaine Lettuce and Eggs
Cobb salads may be taking a beating this week as two main ingredients are setting food epidemiologists into overtime with E.coli and Salmonella outbreaks. Three days ago, it was announced that the source of a 16-state E. coli O157:H7 outbreak, had been identified as a romaine lettuce farm in Yuma, AZ. The CDC recently announced that 53 people have been sickened and the common ingredient amongst them was chopped romaine lettuce, which was traced back to the Yuma region. If that wasn’t bad enough, over 206 million eggs have been recalled across 9 states due to a Salmonella outbreak linked back to eggs from a farm in Hyde County, N.C., and distributed by an Indiana company. “The FDA said the voluntary recall is the result of 22 illnesses reported in East Coast states, which led to extensive interviews and an inspection of the Hyde County farm. The outbreak involves the Salmonella Braenderup subtype. Federal and state officials have been investigating the outbreak since early March.”