From Legionella to the BWC, we’re the spot for all things biodefense. Did you know that China recently approved an ethics advisory group after the CRISPR-babies scandal? Welcome to your weekly dose of global health security news!

Launch of the 2019 Next Generation Biosecurity Competition
Are you a global health security and biosecurity student or professional? “NTI | bio is partnering with the Next Generation Global Health Security (GHS) Network to advance the biosecurity and biosafety-related targets of the Global Health Security Agenda (GHSA). Together, we are launching the third annual joint competition to foster a biosecurity professional track within the Next Generation GHS Network. The 2019 competition will spur next generation experts in health security to discuss catalytic actions that can be taken to reduce biological risks associated with advances in technology and promote biosecurity norms. For the 2019 Next Generation for Biosecurity Competition, we will publish creative and innovative papers that promote regional, multi-sectoral, and global collaboration.  Each team can include up to three people and should: 1) explore concrete collaborative actions that can be taken to build national, regional, and global norms for preventing deliberate and/or accidental biological events; and 2) promote cross-sectoral and cross-regional partnerships to advance biosecurity and biosafety. Papers should directly address the biosecurity targets included within the World Health Organization Joint External Evaluation and the GHSA Action Package on Biosecurity and Biosafety (APP3).” If you’re a GMU biodefense student or alum – you’re in luck as we’ve got a Next Generation Global Health Security Network chapter (membership is a requirement for the competition).

CSIS- Federal Funding for Biosafety Research is Critically Needed
The Center for Strategic & International Studies (CSIS) has just released their report on why we desperately need to provide funding for biosafety research in the face of new biotech and emerging infectious disease threats. “Currently, we lack the evidence basis to take new, needed measures to prevent accidents in biological laboratories, which, as mankind continues to expand its capabilities to manipulate life (including the viruses and bacteria that cause disease), leaves us more vulnerable to the accidental initiation of disease outbreaks with potentially dangerous consequences locally, regionally, and beyond. New biotechnologies are enabling scientists to design or modify life in ways not previously possible. These biotechnologies enable professional and amateur researchers to use simple life forms (e.g., bacteria and yeast) to create simple sensors and produce industrial chemicals, materials, and pharmaceuticals cheaply and from commonplace reagents. The manipulation of pathogens (the microbes that cause disease) fosters a better understanding of how these agents evolve and interact with the body, enabling the development of next generation cures. Despite the significant U.S. and global investment in biotechnology, concern has been voiced by scientists, policy experts, and members of the community  that scientists may be ill-equipped to handle novel, manipulated microbes safely, potentially resulting in accidental infection of themselves or their local communities, accidental release into the environment, or even the initiation of a global pandemic.”

Biological Weapons Convention Meeting of Experts – Updates and Deciding on Emergency Assistance in Cases of Bioweapons Use
If you’ve been missing the MXs, Richard Guthrie has you covered with his daily accounts of these meetings and events. Thursday was the closing day of MX4 and focused on the financial situation. “The Chair of the 2019 Meeting of States Parties (MSP), Ambassador Yann Hwang (France), held informal consultations with delegates from states parties to discuss the financial situation for the BWC which remains difficult. Non- payments of agreed assessments by a number of states parties continue to cause problems. While some of these eventually appear as late payments, the ongoing deficit is sufficiently large to put the MSP at risk. As the financial accounting period is the calendar year, the MSP at the end of the year is always going to be the most vulnerable activity if there is a financial shortfall. In 2018, some economies were made on the MSP by having one informal day of activities without interpretation, putting a number of delegates at a disadvantage. The government of France has a clearly stated position on multilingualism within multilateralism and so the MSP Chair would be extremely reluctant to implement a similar route to financial savings. The Working Capital Fund established by the 2018 MSP is specifically designed not to subsidise non-payment, but to smooth out cash flow during the year. Depleting the fund — which is not even close to its target value – in its first year to cover the costs of the MSP would render it useless for purposes of supporting core activities such as the ISU. There are also financial implications of decisions that will need to be taken in relation to the Ninth Review Conference to be held in 2021.” Dr. Jean Pascal Zanders was also in attendance and has reported out on discussions surrounding Article VII – “Being one of the more obscure provisions in the BTWC, Article VII only attracted state party attention over the past ten years or so. In follow-up to the decision of the 7th Review Conference (2011), parties to the convention looked for the first time more closely at the provision during the August 2014 Meeting of Experts (MX). As it happened, the gathering coincided with the expanding Ebola crisis in West Africa. The epidemic gave urgency to the concrete implementation of Article VII. The daily images of victims and fully protected medical staff broadcast around the world left lasting impressions of how a biological attack from another state or terrorist entity might affect societies anywhere. Operationalising Article VII has proven more complex than anticipated. The provision comprises several clauses that fit ill together upon closer inspection and hence obscure its originally intended goals. In addition, it contains no instructions about how a state party should trigger it or the global community respond after its invocation.”

CSIS Commission on Strengthening America’s Health Security Meeting
“On June 26, 2019, the CSIS Commission on Strengthening America’s Health Security convened for the third time since its launch in April 2018. The Commission’s core aim is to chart a dynamic and concrete vision for the future of U.S. leadership in global health security—at home and abroad.” “On June 26, Commission members—a diverse group of high-level opinion leaders who bridge security and health and the public and private sectors, including six members of Congress—met to discuss a proposed U.S. doctrine for global health security. Commission members deliberated and reached a broad consensus endorsing a doctrine of continuous prevention, protection, and resilience, which would protect the American people from the most pressing global health security threats we face today. The measures outlined in the paper are affordable, proven, and draw support from across the political spectrum. The time to act is now.” Participants called for Congress and the administration to take action across seven areas, including ensuring full and sustained, multi-year funding for the GHSA, ensuring ample and quick-disbursing finances, establishing a global health crises response corps, etc.

Combatting AMR Through Payment Shifts
In the battle against the resistant bug, sometimes you have to change tactics and bring in the big guns – like the Centers for Medicare and Medicaid Services (CMS). Developing antimicrobials has been a particular challenge, despite efforts to push and pull research and development. BARDA Director Rick A. Bright recently discussed this problem, but now a new CMS rule could help guide change. “Without payment reform, the antimicrobials marketplace will not survive. CMS Administrator Seema Verma understands this reality and the necessity for a strong marketplace for both public health and national security purposes. On Friday, August 2, CMS issued its fiscal year (FY) 2020 Hospital Inpatient Prospective Payment System (IPPS) Final Rule. Among other changes to the way CMS pays for Medicare services, CMS recognized the need for greater payment of newer, potentially safer and more effective antimicrobial drugs. The new rule will (1) change the severity level designation for multiple ICD-10 codes for antimicrobial drug resistance from ‘non-CC’ to ‘CC’ (which stands for complications or comorbidities) to increase payments to hospitals due to the added clinical complexity of treating patients with drug-resistant infections, (2) create an alternative pathway for the new technology add-on payment (NTAP) for qualified infectious disease products (QIDPs), under which these drugs would not have to meet the substantial clinical improvement criterion, and (3) increase the NTAP for QIDPs from 50 percent to 75 percent. This final rule lessens economic incentives to utilize older antimicrobial drugs such as colistin, and shift medical practice to employ more appropriate, newer generation antimicrobials. Payment more closely aligned with the value of these lifesaving medicines will shift the current market realities of these drugs for companies, investors, and patients. No single action will solve the antimicrobial resistance problem; however CMS’ efforts undoubtedly can improve the marketplace and re-catalyze innovation in basic science discovery, and research and development efforts. We appreciate and congratulate Administrator Verma for taking such bold leadership in this fight. ” 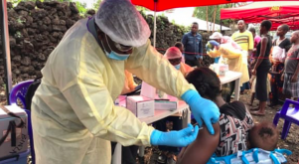 Ebola in the DRC
The latest WHO dashboard is showing that the outbreak has reached 2,787 cases. Seven cases were reported from the DRC ministry of health earlier this week and there is growing concern about the impact the outbreak is having on children in the area. “Last December UNICEF sounded the alarm about the high number of children infected in the outbreak, noting that one of every third people confirmed infected in the DRC’s outbreak was a child, unusual for Ebola epidemics. The agency noted that 1 in 10 children were under age 5 and that kids were more likely to die from the disease than adults. Save the Children said in its statement yesterday that around 737 children have been infected with Ebola in the DRC’s outbreak. And based on the latest numbers, the impact on kids has increased. In the first 6 months of the outbreak, which was declared on Aug 1, 2018, just under 100 deaths in children had been reported. However, in the 6 months that followed, over four times as many have died. Heather Kerr, Save the Children’s country director in the DRC, said, ‘This is another grim milestone in a crisis that is devastating children in its path, especially the youngest. Some 40% of children who have contracted the disease are under the age of five, and many of them have died.’ She also said the outbreak has had a wider impact on children because of the high overall fatality rate from the virus, with thousands losing at least one of their parents or separated from their families.”

SWP Comment- Why the Containment of Infectious Diseases Alone Is Not Enough
You can now access this commentary by Daniel Gulati and Maike Voss here, which discusses the current DRC Ebola outbreak and that in “crisis situations like these, the interdependencies between health and security are highly complex. Which population groups and which diseases are perceived as suspected health risks, and why, is a normative question for donor countries. It has political consequences above all for affected developing countries. Where health and security are common goals, it is not enough to contain infectious diseases in developing countries. Instead, resilient, well-functioning, and accessible health systems must be established. This fosters the implementation of the human right to health, creates trust in state structures, and takes into account the security interests of other states. In the United Nations (UN) Security Council, the German government could advocate for policies based on the narrative ‘stability through health’.”