Its getting pretty cold outside, right? So what better way to spend your Sunday than catching up on all the best stories of the week! This week we’ve got Wikipedia as a predictive took for the spread of disease, a catchy new name for Chikungunya, MERS CoV in Saudi Arabia, some stories you may have missed, and, of course, an Ebola update.

How Wikipedia Reading Habits Can Successfully Predict the Spread of Disease

In my absolute favorite story of the week, researchers have identified a link between the spread of disease and the corresponding page hits of those diseases on Wikipedia. No, the Internet isn’t giving people E-bola, but page views seem to have a predictive effect on infectious disease spread. During the three-year study, looking at readers’ habits, the researchers could predict the spread of flu in the U.S., Poland, Thailand, and Japan, and dengue in Brazil and Thailand at least 28 days before those countries’ health ministries.

The Washington Post—“Official government data—usually released with a one- or two-week lag time—lagged four weeks behind Wikipedia reading habits, according to Del Valle; people, she said, are probably reading about the illnesses they have before heading to the doctor.”

As Chikungunya makes it way through the Americas, awareness of the disease becomes more important—including the creation of a catchy nickname! The vector, transmissibility, and symptoms are similar to Dengue and with Chikungunya being relatively new to the western hemisphere, a story like this one may be helpful in putting a human face on a growing problem.

The Atlantic—“It might be parochial to call Chikungunya a “vacation virus”; however, as Americans prepare to hit the Caribbean beaches in the coming winter months, awareness campaigns are ramping up. Last week, the travel section of the New York Times ran a feature on Chikungunya highlighting how tourism agencies and organizations are both downplaying the scope of the outbreak and advising simple measures to deal with the virus. (Avoid mosquitos.)”

MERS Cases on the Rise in Saudi Arabia

Since September 5, there have been 38 new cases of MERS-CoV in Saudi Arabia, bringing the total number of cases in Saudi Arabia to 798. The WHO said that due to the non-specific symptoms of MERS, it is critical that health care facilities consistently apply standard precautions with all patients regardless of their initial diagnosis. Furthermore, until more is understood about MERS, immunocompromised individuals should practice general hygiene measures, like hand washing, and avoid close contact with sick animals. Nearly one third of the new cases were reported by patients who had recently had close contact with camels.

Outbreak News Today—“The continued increase in cases prompted Anees Sindi, deputy commander of the Command and Control Center (CCC) to say, “MERS-CoV is active and we need to be on full alert.” In addition, the Saudi Arabia Ministry of Health launched a new public information campaign in Taif in response to the recent spike in new cases of MERS-CoV in the region. Medical professionals will be made available at public locations with the aim of educating citizens on the need to avoid unprotected contact with camels because of the risk of infection with MERS-CoV, underlining the crucial role of the community in preventing the spread of the disease in the Kingdom.”

Ebola is on the rise again in Sierra Leone bringing the number of deaths to 5,147 and cases to 14,068. It appears that the virus is finding new pockets to inhabit including villages outside the Liberian capital and in Bamako, the capital of Mali (eclipsing earlier success in that country at containment.) Despite these new infections outside of Monrovia, Liberian President Ellen Johnson Sirleaf has ended the state of emergency in that country. Unsurprisingly, the epidemic has imposed a financial burden on the affected countries including losses in agricultural trade and the service industries. Elsewhere in Africa, Ugandan health officials have declared the country free of an Ebola-like Marburg virus. Stateside, a new report from the CDC outlines steps taken in Dallas to prevent further virus spread and a third Ebola patient headed to the bio containment unit at the Nebraska Medical Center for treatment. Finally, 80 U.S. Military personnel helping to fight Ebola in Liberia returned home this week, and though none are displaying symptoms, they will be monitored for 21 days at Joint Base Langley-Eustis in Virginia. 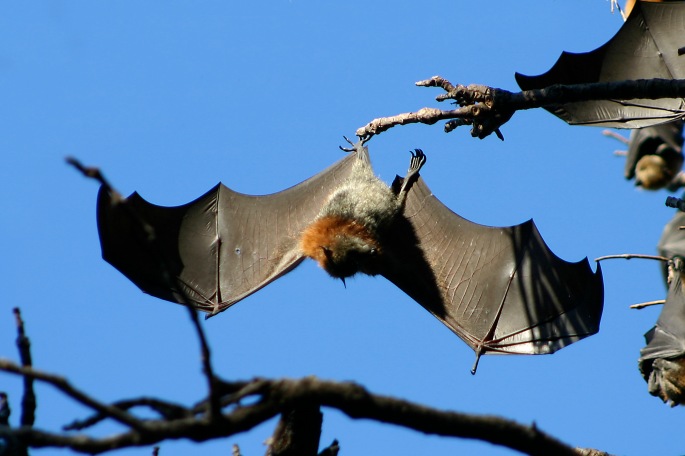 It’s been a busy week in the biodefense world, between the continuing outbreak of Ebola in Western Africa and the realization that the Black Death may actually have been pneumonic plague rather than bubonic plague, so let’s take a moment this Friday to slow things down.

Highlights include Ebola travel restrictions, a possible source for the Ebola outbreak, and how to protect yourself during the most serious pandemic of all—the zombie pandemic. Have a great weekend!

When planning your vacation to Guinea, keep this in mind…

As of April 1, the number of suspect Ebola cases in Guinea has risen to 127 with 83 deaths (for a case fatality rate of 65%) according to the WHO. Liberia now has eight suspected cases with five deaths. Sierra Leone has had only two deaths after two bodies were repatriated after dying from Ebola. In neighboring Mali, the government has instituted thermal scans for those travelling to Mali as well as restricting movement within the capital city of Bamako. Meanwhile, Senegal has closed their border with Guinea and Saudi Arabia has suspended visas for Muslim pilgrims coming from Guinea and Liberia. Despite all of this, the WHO does not recommend travel restrictions.

Philippine Daily Inquirer—“The international health agency said there was not enough reason to push for the imposition of travel restrictions in response to the Ebola outbreak. “WHO does not recommend that any travel or trade restrictions be applied with respect to this event,” it said in a statement.”

And while on vacation, here are some foods to avoid…

In another response to the Ebola outbreak in Guinea, officials have taken an unusual step of banning the consumption of bats as food—including grilled bat, bat soup and “other local delicacies.” It has long been suspected that bats are somehow instrumental in the spread of Ebola either as a vector or a reservoir for the disease.

CBS News—“‘We discovered the vector [infectious] agent of the Ebola virus is the bat,” Remy Lamah, the country’s [Guinea] health minister, told Bloomberg News. “We sent messages everywhere to announce the ban. People must even avoid consumption of rats and monkeys. They are very dangerous animals.’”

The good news is, in the event of a serious pandemic, you may have new protection!

Just in time for the Walking Dead finale last weekend, the American Chemical Society released new research related to the chemistry of death, and how that chemistry can shield us from the flesh and brain eating horde of zombies.

Science is a serious subject and pandemic possibilities are crises in the making…but that doesn’t mean science can’t be fun for a general audience!