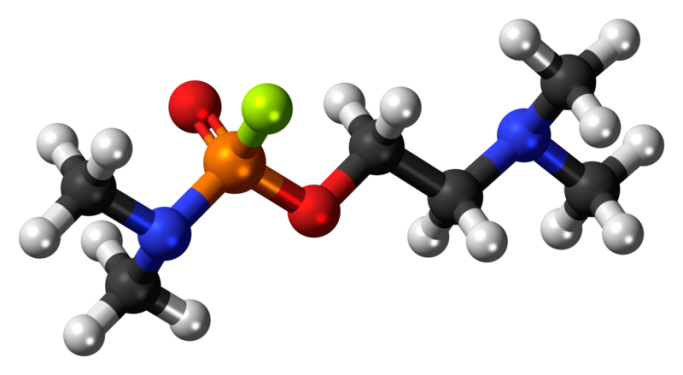 Bioscavengers are naturally-occurring proteins capable of effective nerve agent elimination. They are currently theoretical or in the early stages of clinical trials. However, they have the potential to revolutionize the prevention of nerve agent poisoning.

Discovered by German chemists researching insecticides in the 1930s, nerve agents were quickly recognized as a potential weapon. Nerve agents were produced and stockpiled by the Germans during World War II but were never used. Their first use during wartime occurred during the Iraq-Iran conflict in the 1980s. Iraq reportedly released nerve agents against Iranian troops and later against members of its Kurdish population.Nerve agents were recently used during Aum Shinrikyo’s Tokyo subway attack in 1995, and again in 2013 by the Assad regime during the Syrian Civil War.

The necessity of pretreatment limits the efficacy of conventional nerve agent treatments. Nerve agents rapidly cause irreversible damage within neuromuscular junctions. The presence of a pretreatment such as pyridostigmine, an acetylcholinesterase inhibitor, helps minimize damage before post-exposure treatment can be administered.

Bioscavengers function as a prophylaxis. Damage to neuromuscular junctions only occur in the presence of nerve agents. In other words, bioscavengers eliminate the need for atropine and oximes, while nullifying any chance of long-term neurologic damage.

Although everyone possesses trace amounts of bioscavengers in their bloodstream, innate levels are too minute to ward off physiologically-significant nerve agent quantities. Bioscavengers must be extracted from enormous amounts of human plasma and administered in a concentrated regimen to counter nerve agent exposure. Harvesting bioscavengers from plasma is costly, inefficient, and impractical as a means of production. More efficient production methods, such as harvesting molecules from the milk of transgenic goats, are currently under investigation.

Methods to create catalytic bioscavengers are under investigation. Researchers are studying the protein structure of stoichiometric bioscavengers to see how it can be altered to form an enzyme. Once appropriate alterations to its chemical composition have been identified, genetic instructions can be created to produce desired results in a transgenic organism.