Welcome to the first few days of Fall 2016! We need to really ramp up our investment in vaccines – an ounce of prevention is worth a pound of cure. Doctors in Saskatchewan are imploring the province to declare a medical state of emergency over a surge of HIV/AIDS cases. Johns Hopkins University is currently working on a study to assess why healthcare workers catch the flu – what’re your thoughts? Poor PPE use, isolation precautions, and/or hand hygiene is my guess. New research from the World Bank shows that antibiotic resistance is likely to increase poverty and by 2050, could cause global economic damage on par with the 2008 financial crisis. The Blue Ribbon Study Panel on Biodefense has received a $1.3 million grant to continue work on assessing American biodefense systems, informing policymakers, etc. Before we start with the latest in global health security, you can now access (for free!) the Global Health Impacts of Vector-Borne Diseases workshop summary here.

The Uncertain Future of Plum Island
Established in 1945, Plum Island Animal Disease Center (PIADC) (Orient Point, NY), “has served as the nation’s premier defense against accidental or intentional introduction of transboundary animal diseases (a.k.a. foreign animal diseases) including foot-and-mouth disease (FMD). PIADC is the only laboratory in the nation that can work on live FMD virus (FMDV). The lab and its staff of nearly 400 employees provide a host of high-impact, indispensable preparedness and response capabilities, including vaccine R&D, diagnostics, training, and bioforensics among others.” Not immune to controversy or a theme in horror movies, Plum Island is a research facility that hosts BSL-2, BSL-3 Enhanced, and Animal Biosafety Level 3 and Biosafety Level 3 Agriculture laboratories and animal research facilities that maintain highly restricted access and trained security professionals. The nostalgia of Plum Island is fast approaching as the research center is set to be closed within the next decade. The research campus will move to Kansas and the 840-acre island is up for sale. “Located 100 miles east of New York City, with sweeping water views, the island has already drawn unsurprising interest from local real estate agents and developers, including, yes, Donald J. Trump. Many people in the area, however, want the island preserved as a nature sanctuary or perhaps a park. In July, a coalition of environmental groups and activists filed a federal lawsuit to stop the sale, and there is a similar legislative push in Congress.” Since its inception and through its new ownership in 2003, (when DHS took it over) the biggest concern of Plum Island has always been containment as the infectious livestock samples and animals could introduce diseases, like food-and-mouth disease, to a susceptible population. The facility takes great care to mitigate any risk through “stringent security clearances and background checks, the boiling of all water discarded from the lab and the requirement that anyone who works within the biocontainment lab must shower twice before leaving. As for the cattle, pigs and other animals used for vaccine and other kinds of testing, they are kept in indoor, secured living quarters, said Dr. Luis L. Rodriguez, who leads research at the center’s laboratories.” In the event a deer should swim onto the island, it’s killed and immolated. Aside from the “Island of Dr. Moreau” vibe that is often felt when discussing the island, it has water views and sandy beaches that are met with a green terrain. While the future of the island is up in the air, the zoning stipulates that it must be reconstructed for similar use (i.e. research). Any takers? 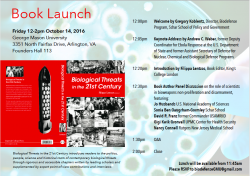 On October 14th, join us in celebrating the book launch of Biological Threats in the 21st Century! Biological Threats in the 21st Century introduces readers to the politics, people, science and historical roots of contemporary biological threats through rigorous and accessible chapters written by leading scholars and supplemented by expert point-of-view contributions and interviews. The book launch will feature a panel discussion on the threat of biological weapons and the role of scientists in bioweapons non-proliferation and disarmament. The event is free and open to the public. Lunch will be available beginning at 11:45 AM so please RSVP. Attendants will also be able to pick up the book at a 15% discount.

GMU Biodefense Graduate Program Informational Videos
Curious about a graduate degree in biodefense but unable to attend an information session? We’re happy to show off our new informational videos on both our MS and PhD biodefense programs at GMU. Check out what students are saying about our MS programs (we have both an online and an in-person tract) and our PhD program. You’ll also get to hear from biodefense guru and graduate program director, Dr. Koblentz, throughout the videos!

The Committee on Energy and Commerce, Subcommittee on Oversight and Investigations will be holding a hearing today at 9am regarding bioresearch labs and the inactivation of dangerous pathogens. While witnesses are by invitation only, the hearing webcast will be available here – don’t miss it! You can also read a recent GAO report on high-containment laboratories: improved oversight of dangerous pathogens needed to mitigate risk.

The Global Implications of Antibiotic Resistance
I love a good zombie movie like the next person, but where are the horror movies about antibiotic resistance? Show me a film that depicts the global threat of losing all effective antibiotics – that is a real horror movie. The UN General Assembly held a high level meeting on Wednesday about the growing threat of antimicrobial resistance (AMR). Despite increasing surveillance and high-level attention to the rise of the resistant bugs, it will take more than the efforts of a few countries. We’ve passed the golden age of antibiotic development and the “pipeline of new antibiotics has been running dry”. Colistin-resistant bacteria continue to sporadically pop up, highlighting that once again, germs know no borders and are skilled in the art of travel. Hopefully, with the recent UN General Assembly meeting, it will send a clear message that the threat of antibiotic resistance is being taken seriously and for more world leaders to really hone in their efforts for surveillance and prevention through the GHSA. Sadly, a recent study found that antibiotic usage hasn’t changed in hospitals, despite the growing threat of AMR. Researchers looked at patient discharge records in over 300 US hospitals between 2006 and 2012 and “found that 55.1% of patients discharged received at least one antibiotic during their stay, with little change in that proportion between 2006 and 2012. The overall rate of antibiotic use for all study years was 755 days of therapy per 1,000 patient-days, a rate that also saw little change over the period of the study. But the study also showed significant increases in the use of carbapenem antibiotics, third- and fourth-generation cephalosporins, beta-lactam/beta-lactamase inhibitor combination antibiotics, tetracyclines, and vancomycin.”

Next Generation Global Health Security Network Webinar – Our Antimicrobial Anthropocene: UNiting against Pan-Epidemic AMR
As you know, a key component of responding to (and preparing for) outbreaks is the ability to treat them. But how can we make sure that the drugs we have to treat diseases will work? How can we combat the growing trend of antimicrobial resistance? In line with the recent high-level meetings by the Presidential Advisory Committee (see here) and the UN, the Next Generation Global Health Security Network is pleased to present the first of an ongoing series of webinars, this one focused on Antimicrobial Resistance (AMR). These webinars are intended to provide unique learning opportunities for global health security professionals through educational sessions about important GHS topics and situate emerging issues for a global health audience.  Please join the event on Tuesday, September 27 from 6:00-7:00pm EST as the Next Generation Global Health Security Leaders Network and CRDF Global host a webinar by Dr. Dan Lucey titled “Our Antimicrobial Anthropocene: UNiting against Pan-Epidemic AMR”.  There will also be limited in-person space for those in the DC metro area who wish to attend.  If you wish to attend in person, please RSVP by email (nextgenghsa@gmail.com)

Your Weekly Dose of Zika News
The Zika virus outbreak has pointed out several international challenges when it comes to infectious disease outbreaks – funding, vector control, long-term health effects, and international events. Sandro Galea points to the poet John Keats as a potential role model for how we should approach such events. Trained as a surgeon, Keats had a solid background in the scientific method, however the quality he “emphasized was not the scientist’s finely tuned analytic instrument, but the ability to exist comfortably amidst uncertainty and doubt.” Galea notes that the Zika outbreak is a prime example of how scientists should start thinking more like poets, living in the space of inevitable ambiguity and the new norm of the grey area. Here is the ECDC’s epidemiological update on Zika. The CDC is ramping up testing support in Florida to aid in rapid diagnostics. A recent study published in the Lancet points to a low risk of sexual transmission and questions the sustainability of Zika transmission without the presence of a vector. The CDC is reporting 3,358 cases of Zika virus in the US as of September 21st. Of these cases, 43 are locally acquired related to mosquitoes.